Did We Have a Blast Playing Dragon’s Fire Megaways Slot From Red Tiger Gaming?

Videoslots Casino has recently added Red Tiger Gamings latest Megaways slot offering under the name of Dragon’s Fire which boasts wins in excess of 10000x stake, Rising Multipliers (up to 50x!) and up to 117,649 ways to win.

Needless to say that Dragon’s Fire is packed full to brim with high variance action and insane hit potential, fans of Megaways slot will be right at home on this machine, the graphics are superb with cleverly animated movements  from the dragon that is draping over the reels when special features activate,  breathing fire onto the reels and a distinct rumbling when scatter teases appear on the reels.

In the base game, the megaways feature is active on every spin, the main difference between this slot and other regular megaways is the addition of a rising multiplier for successive wins in the base game, the tumbling reels feature has been sacrificed and this added as the replacement feature. The base game hits aren’t too regular so getting up to a 2x or 3x multiplier is the norm but occasionally a lucky streak can propel the multiplier value to much higher values.

On top of this base game feature, the Dragon can also add a Dragon’s Eye Boost (Multipliers up to 10x) and Fire Blast (Selected reels have scatters or wilds placed onto them) keeping the base game fairly interesting  when these features activate.

The biggest win potential, however, comes from the main bonus round (3 Scatters) where the multiplier rises with every win during the free spins, both mini-features are also active with re-triggers possible too so longs of extra spins, and if that wasn’t enough, the tumbling reels feature comes into effect during the bonus round too, allowing several wins from a single spin and increasing the win multiplier much quicker.

Although we have been flooded with Megaways slots in the last of couple of years this particular release is super high quality both in terms of graphics and animations, with a few nice twists to the gameplay to make sure this slot is still interesting whilst waiting for the bonus rounds. 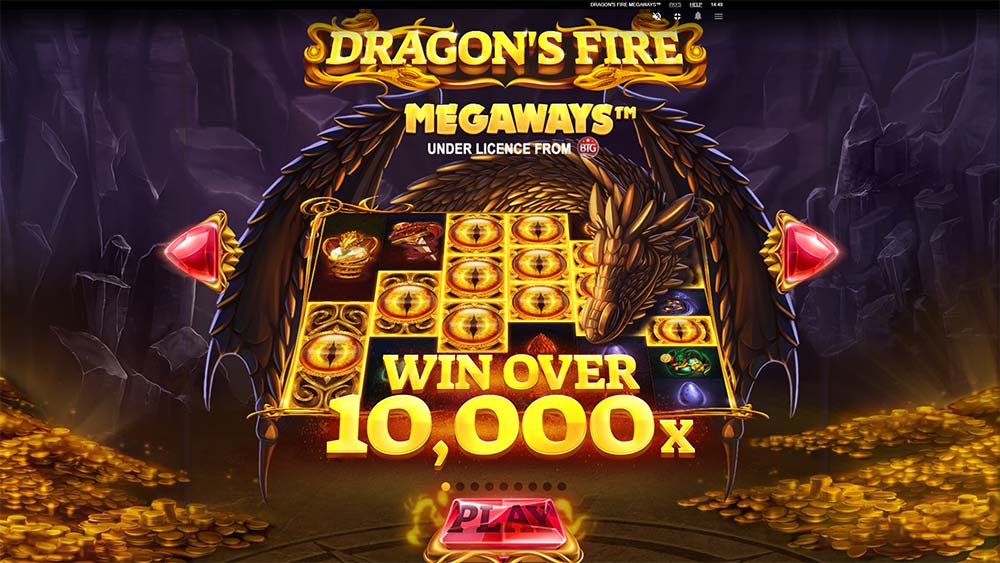 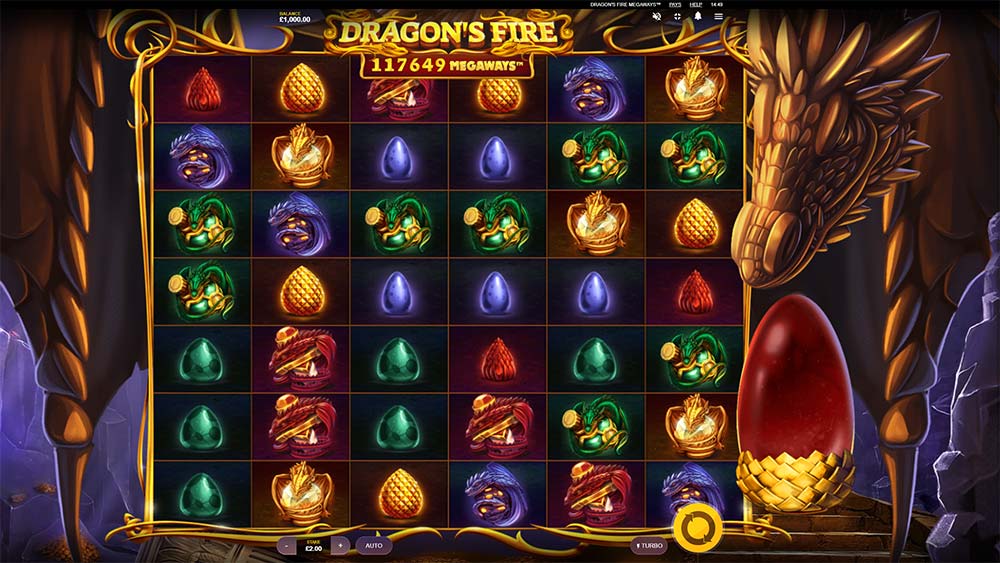 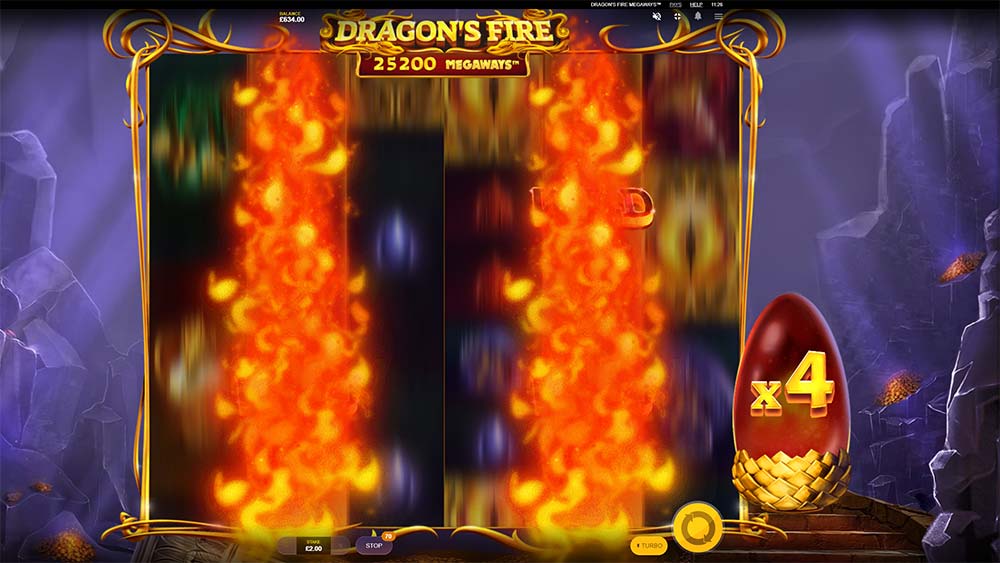 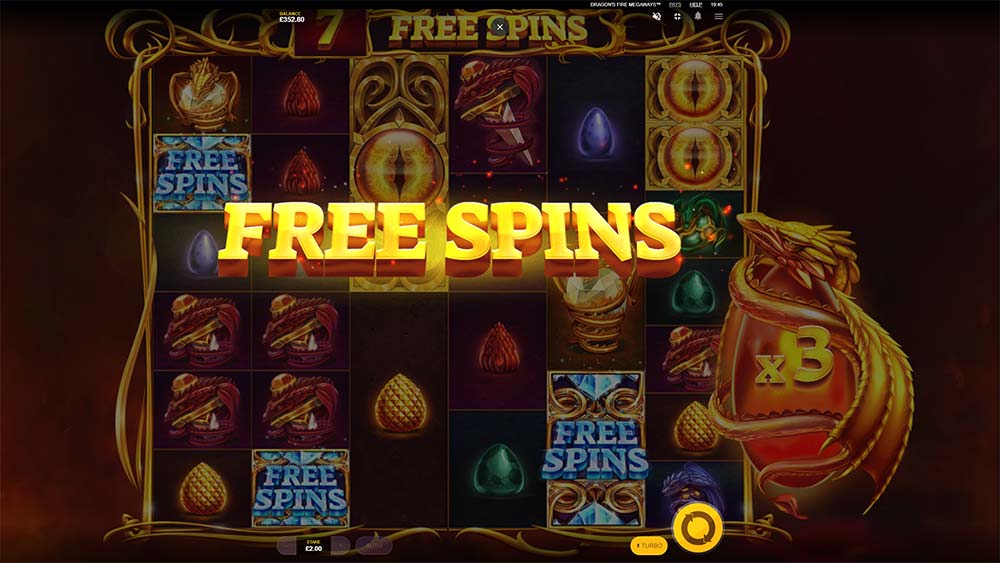 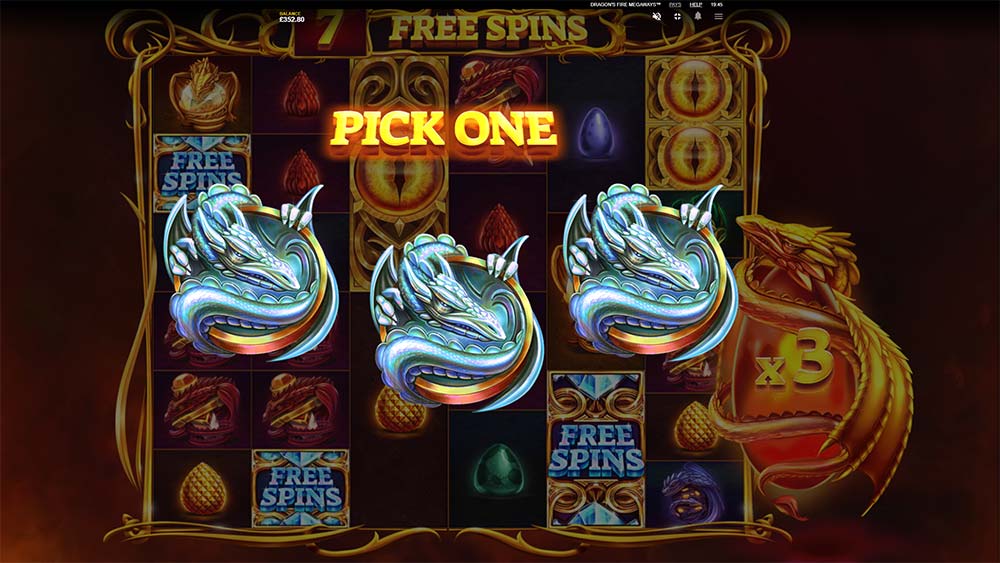 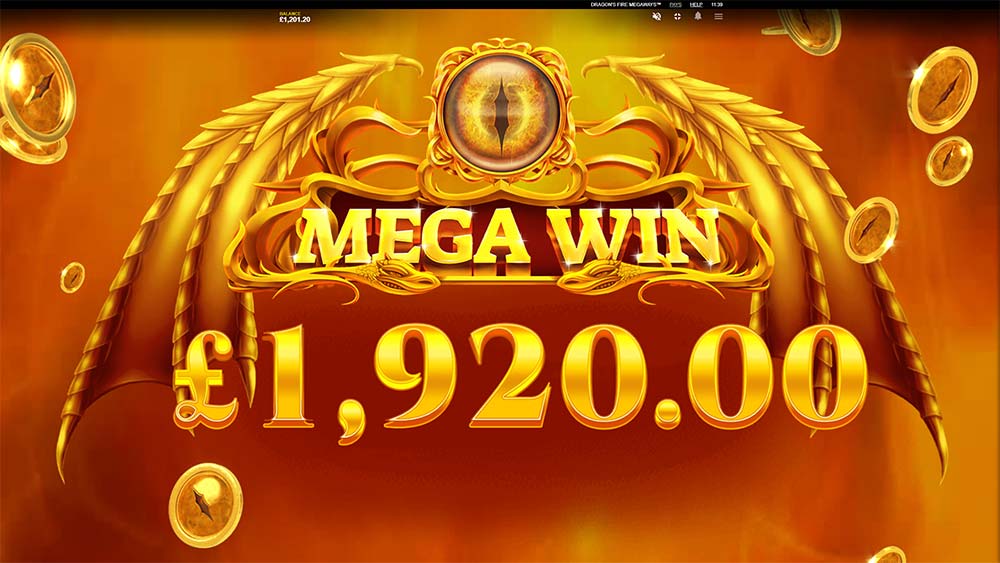 The Dragons Egg Multiplier will increase in value with each successive win in either the base game or bonus round, this can rise to as high as a 50x Multiplier, non-winning spins will reset the multiplier in the base game, but not during the main bonus round.

The dragon can randomly wake up boost the multiplier level up to as high as a 10x Multiplier, this feature can also activate during the free spins bonus round.

When the Fire Blast feature activates reels are set on fire resulting in either extra added wilds or extra scatter that greatly increase your chances of triggering the main bonus feature.

The Dragon’s Fire Megaways slot is well worth checking out if you are a fan of the Megaways style slots, the graphics and overall polish to this slot are of a very high standard along with enough mini-features and changes to the Megaways format to keep things interesting in both the base game and bonus rounds.

The usual issues with Megaways slots were apparent in our playtests with sometimes horrendously long waits for a bonus trigger, but with our extensive playtesting we got to see some impressive bonus round results too. The Average bonus rounds tend to be in the range of 20x up to 100x stake but our best result was very close to being 1000x stake (See screenshots above).

The rising multipliers and chances for re-triggers really make this slot very exciting once the multiplier has started to rise in value with the highest paying symbols offering some incredibly huge wins when they land in view.

Overall a nice addition to the Megaways style slots and worth checking out if you already enjoy them, take the very high variance on board and adjust your bet size accordingly and be very patient as bonus rounds can be difficult to trigger but can be equally as rewarding too!