The Mariachi Band Is Back in Thunderkick’s Day of Dead Celebration Slot – Esqueleto Explosivo 2!

Casumo Casino has recently added the Mariachi/Day of the dead themed Esqueleto Explosivo 2 from Thunderkick to their casino, this is an exclusivley early release for Casumo with the offical release date for other casinos being several weeks away!

The original Esqueleto Explosivo slot was quite a popular slot with tumbling reels, rising multipliers, exploding symbols and a superb Day of the Dead theme, it did, however, lack in some area most notably the lack of the main bonus round feature and the extra excitement that can bring.

In Esqueleto Explosivo 2 the core gameplay is very similar to the original, with a some subtle tweaks including new high paying symbols that do not get removed from the reels during the explosions, a free spins round with not only re-triggers but extra spins awarded too, along with rising locked multipliers that can rise up to 32x.

There is also one final 64x Multiplier that needs to be unlocked before it comes into play and this done by collecting the special exploding wild symbols during the bonus round. If you do manage to lock the multiplier values 5 times then this huge multiplier then comes into play!

Initially, this looks like every gripe that you could have had with the original slot has been addressed, you now have free spins, rising locked multipliers, extra spins, part and full bonus re-triggers and even bigger multipliers on offer, but we did have issues with this slot and struggled in our lengthy playtests to even get close once to unlocking the massive 64x multiplier!

Check out all of Esqueleto Explosivo 2’s features in the gameplay video below! 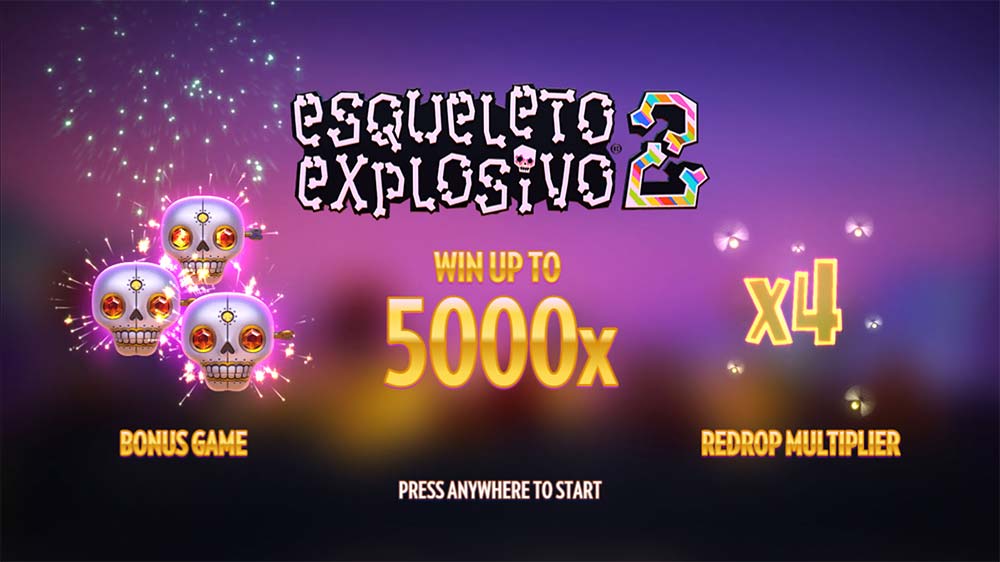 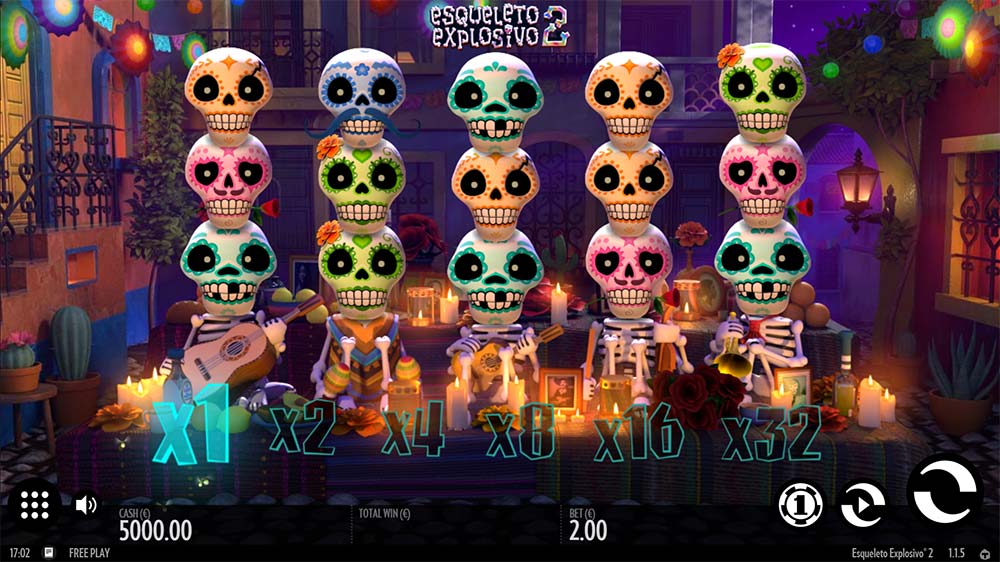 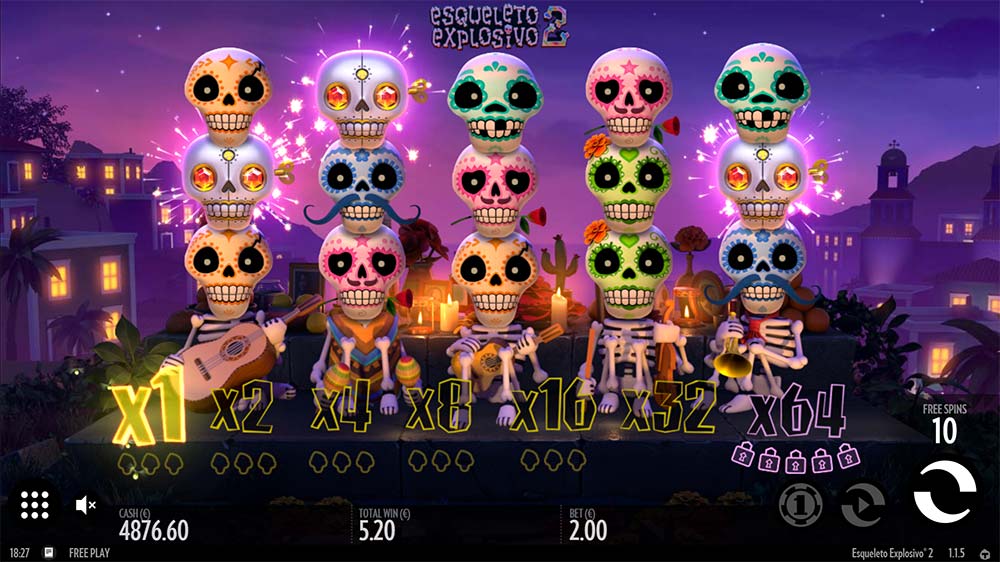 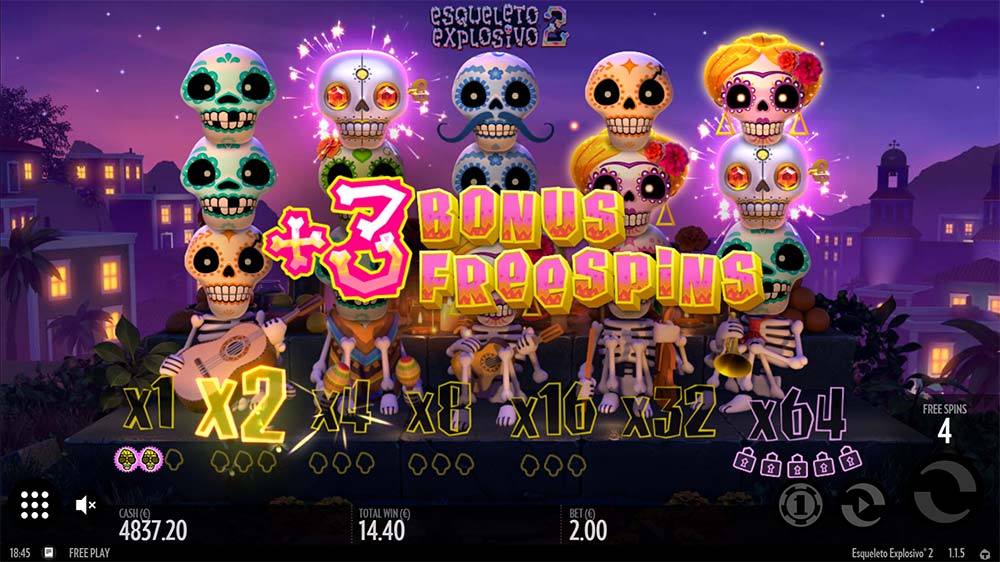 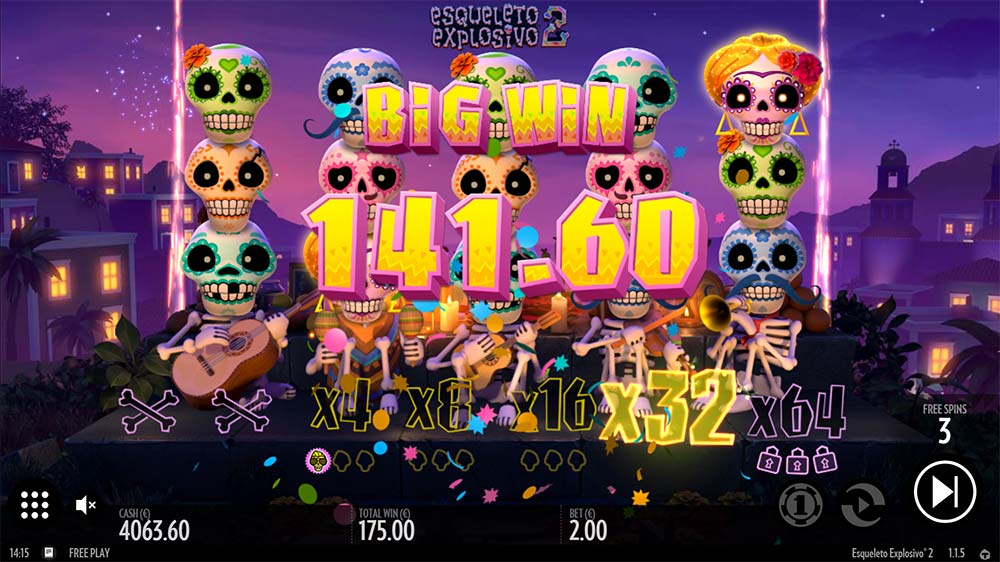 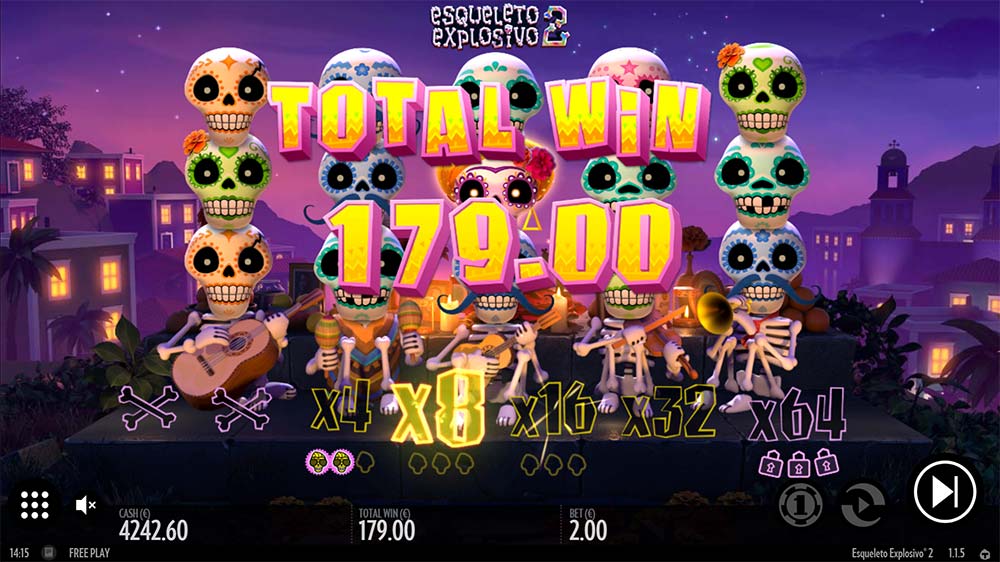 The Explosivo Wild symbol acts like a regular wild symbol in substituting for symbol pays but will also explode even on non-winning spins removing adjacent symbols from the reels (maximum of 8).

The free spins are triggered by landing 3 or more of the scatter symbols in the base game, re-triggers are also possible during the bonus round with just 2 scatters required!

During the free spins the Mucho Multiplier from the base game is active, by collecting the Explosivo Wild symbols you can increase the minimum multiplier applied to each win fro every 3 Wilds collected, and also earn an extra free spin every time the lowest multiplier is then removed.

We were initially quite excited to get our hands on Esqueleto Explosivo 2 as the addition of a free spins bonus round along with some key new features all looked to be superb features missing to the original slot, we did, however, struggle somewhat in our playtests with the results from the bonus features.

During our playtests, we had bonus round results in the range of 5x stake to well over 100x stake, but generally, around the 30-50x regions, the highest locked multiplier we reached was 8x which is quite a way still from unlocking the huge 64x multiplier, the re-triggers are also quite rare and look to be key to getting close to fully unlocking this machines potential along with triggering the bonus round initially with more than 3 scatters!

The potential is there but our reality during playtesting was a mix of frustration and underwhelming bonus rounds, it’s a polished slot release and will appeal to fans of the original but we felt it played like a low variance slot when it’s being pitched as a highly volatile release.