Obviously with the upcoming Euro 2016 we can expect  many online slot developers having football related slot releases in time for the summer, we have already spotted Euro Golden Cup from Genesis Gaming, and it’s a pretty safe bet that more developers will be releasing football themed slots too.

Football : Champions Cup is a regular 5×3 reel slot that uses 20 fixed paylines, on loading the slot you have to pick your country flag, this has no bearing on the game outcome, it’s purely for fun and used in the knockout tournament bonus.

Check out the main bonus features in the promotional video for Football : Champions Cup below. 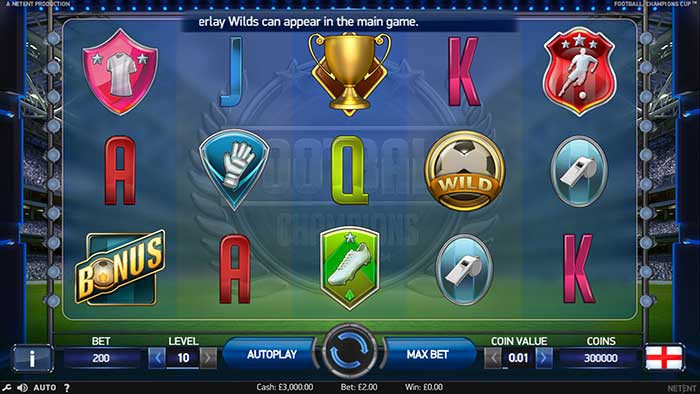 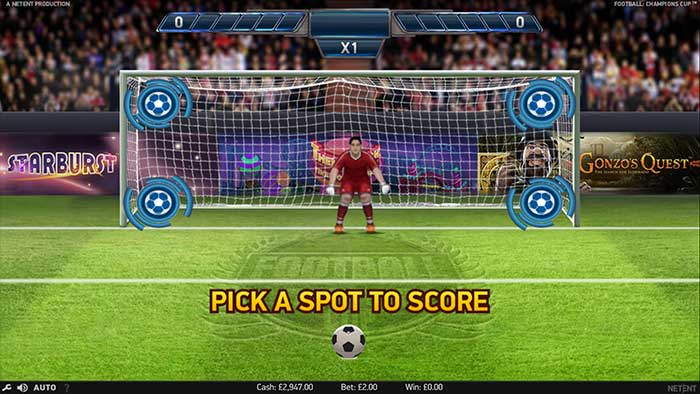 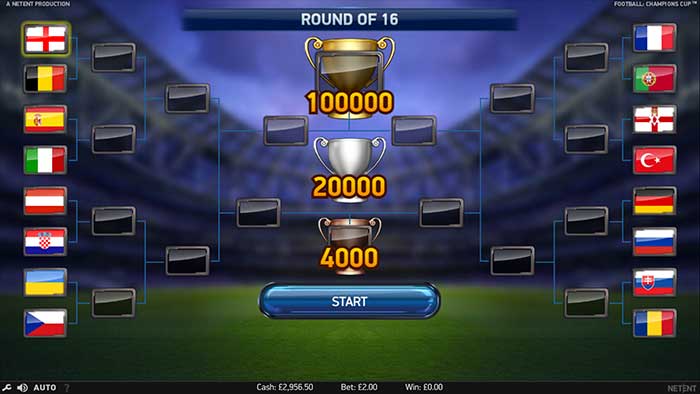 During the base game, on any spin the Overlay Wilds feature may activate, this can add anywhere from 2 up to 5 additional wilds onto the reels increasing the chances of some decent wins in the base game.

The penalty shootout is triggered by landing 3 or more of the Bonus symbol on the reels in the base game, the more of the bonus symbol that triggers this round the greater rewards on offer for each penalty scored.

The bonus takes the form of a football penalty shootout with 5 initial penalties for each side to take, using a pick and click system the player must choose where to take the penalties (1 of 4 choices) as well as taking on the role of the goalkeeper and trying to save the opposing teams penalties too.

Cash rewards are given for scoring penalties, and if you manage to save penalties as the goalkeeper you are awarded a multiplier value to this coin total at the end of the bonus round.

After the initial 5 penalties if the scores are tied then it goes to sudden death, this can go on for a maximum of 10 rounds, then you are guaranteed to score and save the 10th penalty.

The main bonus round is triggered by landing 3 of the Trophy Scatter Symbols which only appear on reels 2,3,and 4 this then transports you to the Final 16 knockout rounds of the football tournament, if you manage to win your games during the free spins round you progress to the next stage and are granted further free spins, make it all the way to the final and there’s a 500x bet win on offer for the winner.

There are coin prizes on offer for the top 3 finishers in the tournament, as well of course as your free spins winnings during the bonuses.

During the free spins round you have an initial 6 free spins, if you manage to land any of the special wilds on the reels a goal is scored.

The winner progresses to the next round, the loser is knocked out and the bonus ends, and if after the initial free spins has finished and the result is tied, further free spins are played until there is a winner.

If you manage to win your match you are granted another 6 free spins and play a new opponent in the knockout tournament, with 4 rounds on offer in total if you make it to the final or runners-up match.

The stated RTP (Return to Player) for Football : Champions Cup is a decent 96.82%.