Rizk Casino has recently added the new slot release from NoLimit City titled Gaelic Gold to their casino after the successful exclusive Barbarian Fury slot which is proving to be very popular with players!

The base game is a very simple 5 payline machine and whilst the max pays aren’t that high even for the premium symbols, the addition of nudging wilds that add multipliers for every nudge spices things up a little in the base game.

Apart from this small feature of nudging wilds triggering the main free spins bonus round is where the potential increases vastly on this machine, by landing a pot of gold in the centre of the middle reel you are then transported to a picking screen where a variety of extra modifiers can be won.

The extra modifiers picked from the Golden Coins can be random within a specific range and include Multipliers up to 5x, extra Rainbow Paylines, and Extra Free spins and these can also combine with the nudging Wilds producing wins of up to 9800x!

There is also a bonus buy feature for this slot but this will be country-specific and costs a total of 50x the current stake to instantly trigger the bonus round, this isn’t a major issue though as the bonus round does seem to trigger quite frequently from regular base game pay.

You can check out the main features on this slot in the gameplay video below. 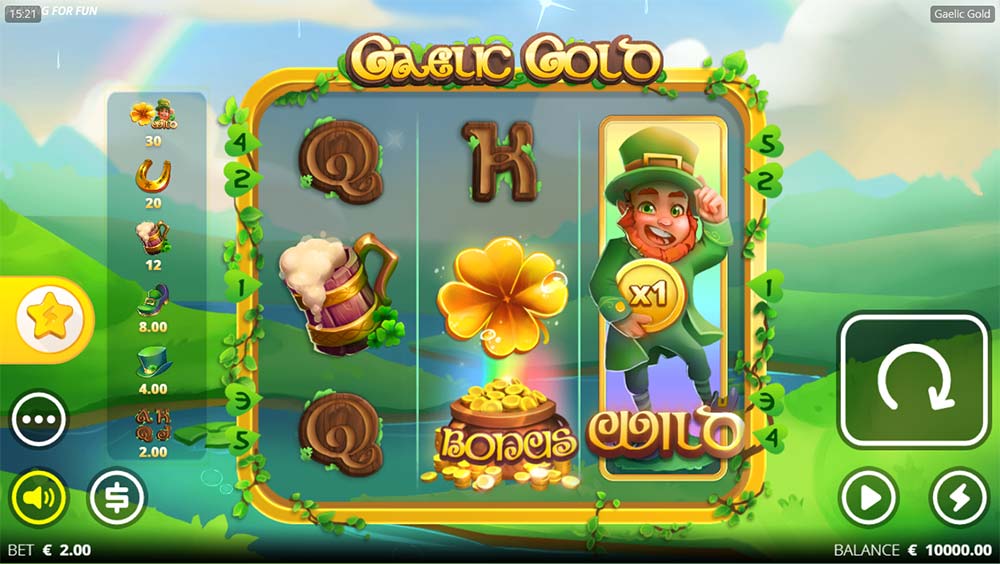 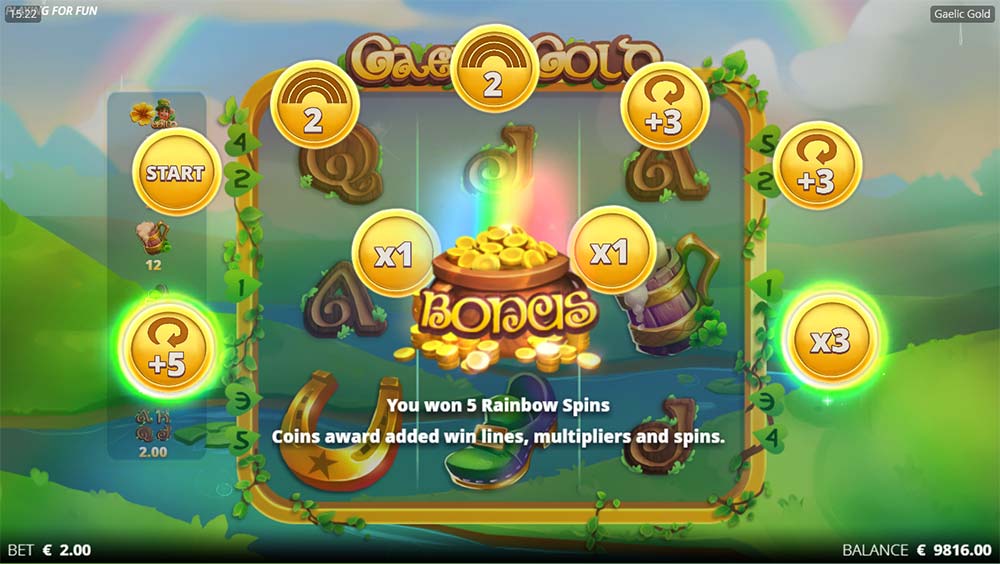 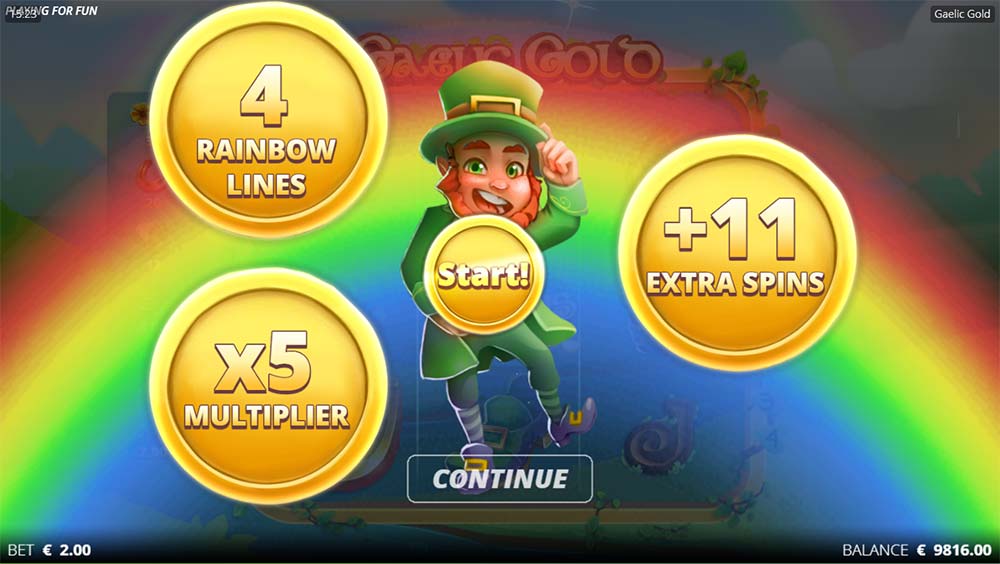 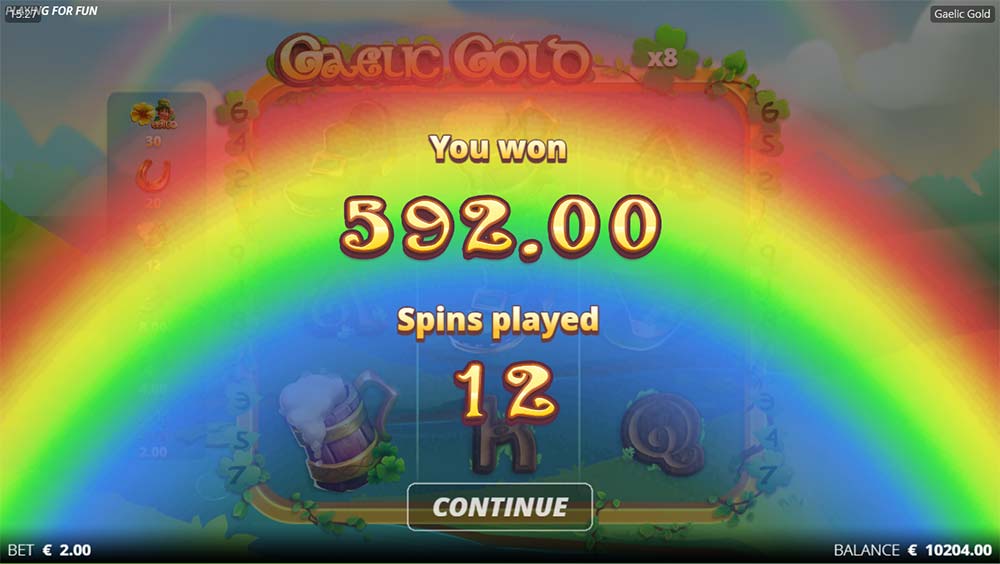 The Nudging Wilds symbols can completely cover a reel and also nudge into view, for every nudge they use, the multiplier also increases by 1x, multiple wild reels are also possible with the multiplier values being added together, and in the bonus round combined with the overall multiplier value too! 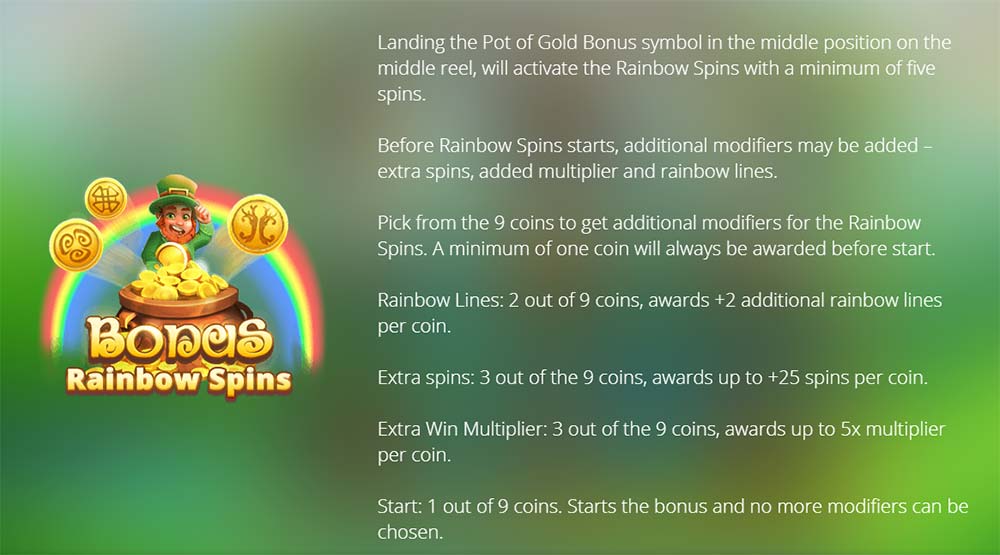 The free spins round is triggered by landing the Pot of the Gold in the centre of the middle reel, and awards a picking bonus round with a variety of random modifiers including,

The Gaelic Gold slot from Nolimit City is a fairly interesting and volatile release for a 3×3 slot, the gameplay is fairly basic but with the introduction of multipliers and nudging wild multipliers there is also a fair degree of volatility hidden away on this machine.

In our playtests, we had bonus rounds in the range of literally 0x stake up to well over 200x stake, so be well prepared for so very bad bonus rounds before you hit anything decent, the picking round can also produce some very varied results with lots of extra spins, multipliers and extra paylines with a varied mix of all 3.

Overall probably not a slot that will appeal to the masses since its a 3 reel machine, but plenty of potential for fans of these simplistic style machines.