Mr Green Casino has recently added a new slot from Leander Studios titled Gem Zone which utilises a new Dynamic Ways payline system which basically works by having changing zones available on the reels for each spin, this can give a variety on different winnings ways from 243 right up to 3125 in the base game.

On first impressions, Gem Zone looks like Starburst colliding with a Megaways slot, although there are some big hints that there is some extreme volatility lurking on this machine, namely the addition of a 6th reel in the bonus round and an increase to the maximum winning ways to a staggering 117,649 ways.

The gameplay is simple and very straightforward with the number of winning ways being the main mechanic that changes on each spin, whilst the maximum pays are quite low even for a 5 of kind it is possible to score some decent hits in the base game thanks to a mixture of wilds and heavily stacked high paying symbols.

The main spice to this slot, however, comes from triggering the bonus round with 3 bonus scatter symbols, this awards you with 10 free spins on a much enlarged 6 reel slot and gives you access to landing 6 of a kind wins too.

It has to be said that even the 6 of a kind wins do no look that impressive but the reels do seem heavily stacked with the highest paying symbols during the bonus round and with 117,649 ways huge wins are definitely a possibility.

Apart from the ever-changing Dynamic Ways there isn’t really any other special features to be aware of apart from you can re-trigger the bonus round, so if you are a fan of very simplistic gameplay and a definite hint of volatility then this release may appeal. 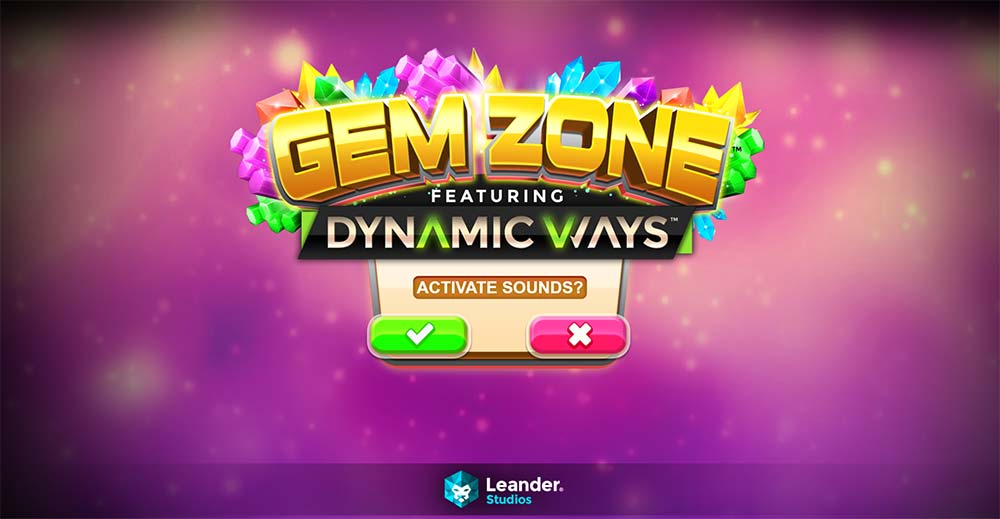 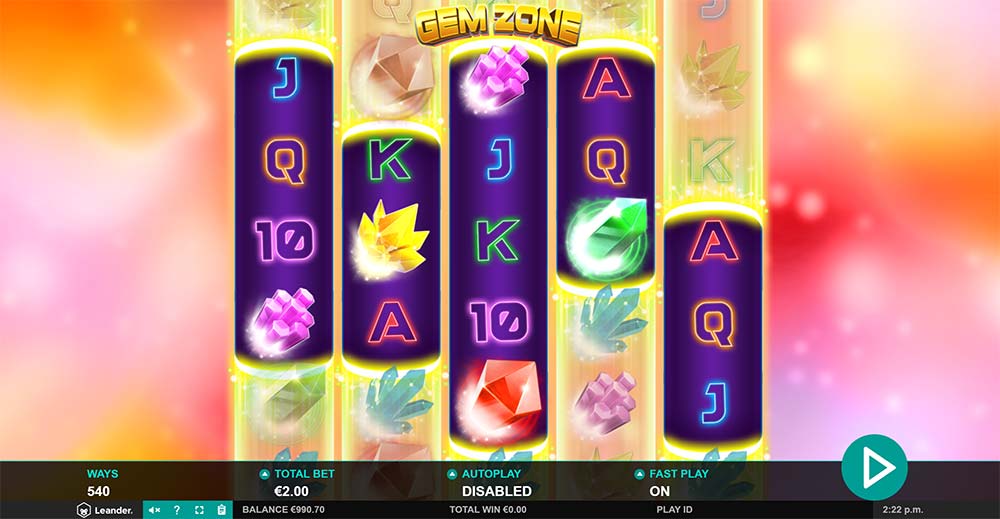 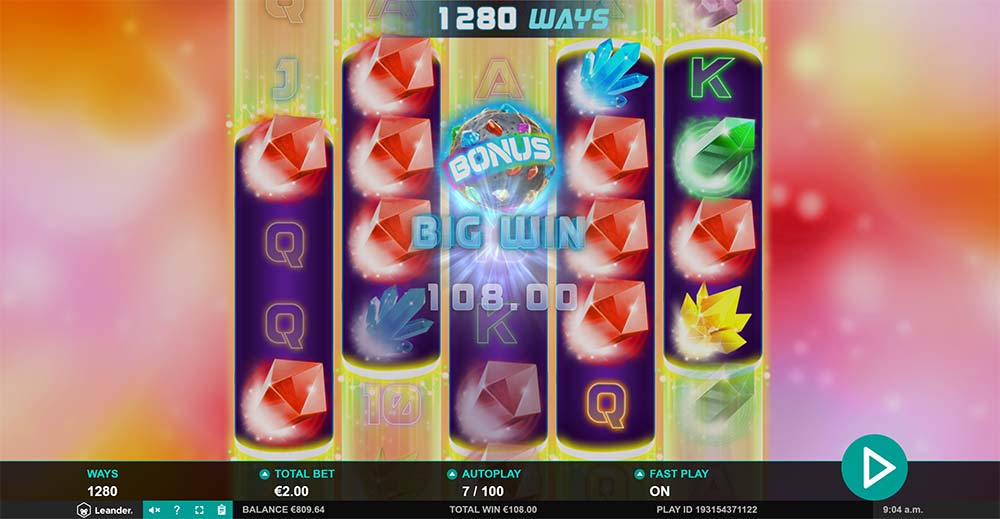 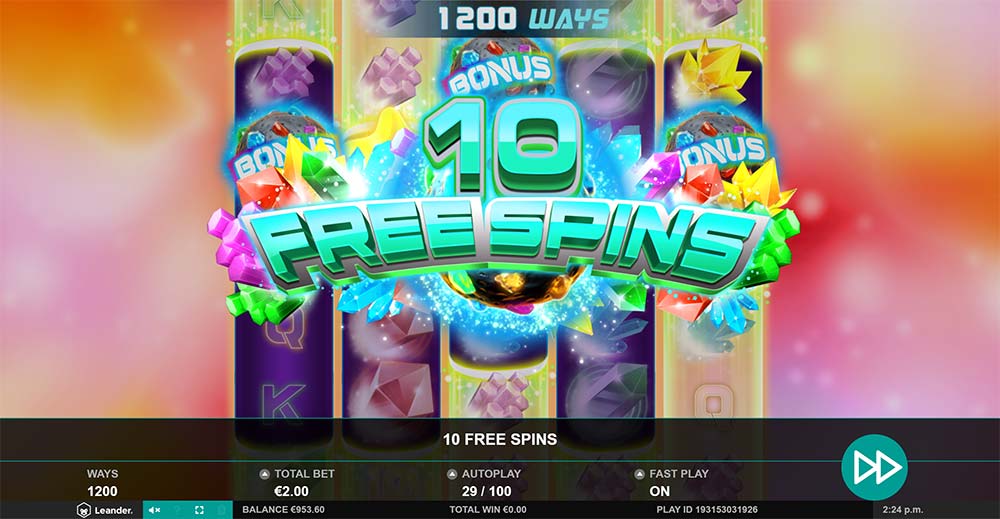 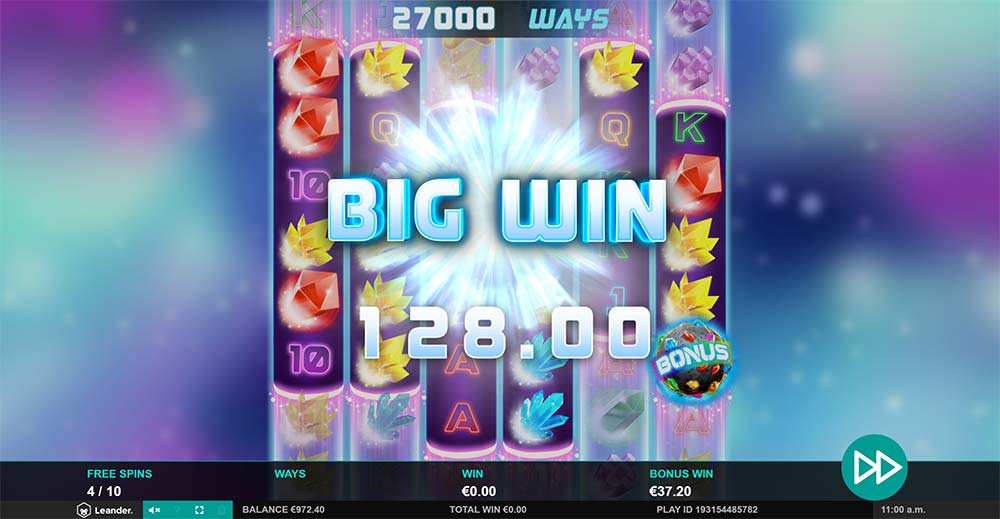 The Dynamic Ways feature works by having zones that change in appearance and size on every spin, altering the number of active symbols in play on each reel and as such the number of winning ways possible.

The main free spins bonus round is triggered by landing 3 bonus scatter symbols on the reels and award an initial 10 free spins with full bonus re-triggers also possible.

The reels are enlarged in size with the addition of a 6th reel allowing 6 of a kind wins from the paytable and of course a hugely increased number of winning ways on every spin.

The Gem Zone slot is an interesting twist on the Megaways style slots from Leander Studios, the gameplay however maybe a little too simplistic in nature to appeal to most players long terms though, but for fans of simple and new gameplay ideas then this is worth taking a look at.

In our playtests we did struggle to get many bonus rounds over the 100x stake mark, and didn’t manage to re-trigger the bonus rounds either, we did get a glimpse of hope with the highest paying symbols being heavily stacked during the bonus round which is where the biggest potential lies from this slot.

What we did find though was the variance on this machine was higher than we initially expected from the bright colourful design of this machine, with a lack of any huge wins from the bonus round this slot was not very forgiving to the bank balance during playtesting which is certainly worth taking into account if you play this with real money.

Overall it’s a nice twist to the “winning ways” mechanics that probably could have done with a few more random features, locked reels, or multipliers adding to spice up the gameplay a bit more.