Pragmatics Play’s Sequel to the Great Rhino Slot Adds Megaways Into the Mix!

Play OJO Casino will be shortly adding Pragmatic Play’s latest slot release Great Rhino Megaways on the 30th April 2020, this is the sequel to their Great Rhino slot released some time ago.

The introduction of the popular Megaways payline system is the first release from Pragmatic Play to utilise this mechanic, whilst they haven’t opted for a completely vanilla megaways system the base gameplay and bonus features are actually quite standard.

To offer some variation to the gameplay Pragmatic have introduced a Double Chance Feature toggle button which will increase your chances of triggering the bonuses for a cost of 25 percent of the current stake level. That pays, of course, are still based on the original stake level so keep this in mind when selecting this option. For countries where allowed, there is also a Bonus Buy feature option.

The double bonus chance feature actually addresses one of the major annoyances of megaways slots, the difficulty in actually triggering the bonus features were the main win potential lies.

Apart from these small additions the slot plays like a regular megaways slot, tumbling reels on wins and rising multipliers in the bonus round along with re-trigger opportunities too, and like most megaways slots some insane potential if you do manage to get a large multiplier value and full lines of premium symbols! 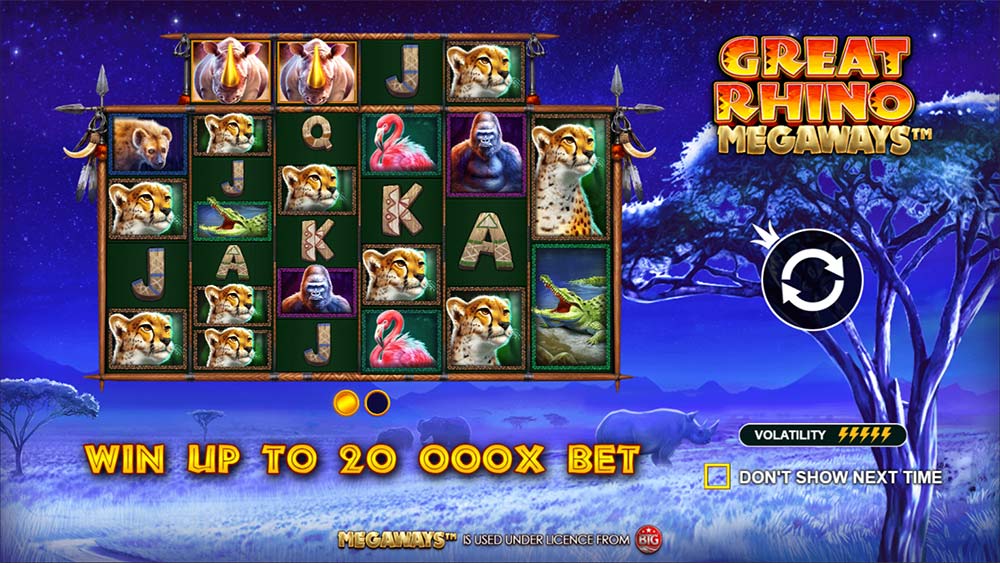 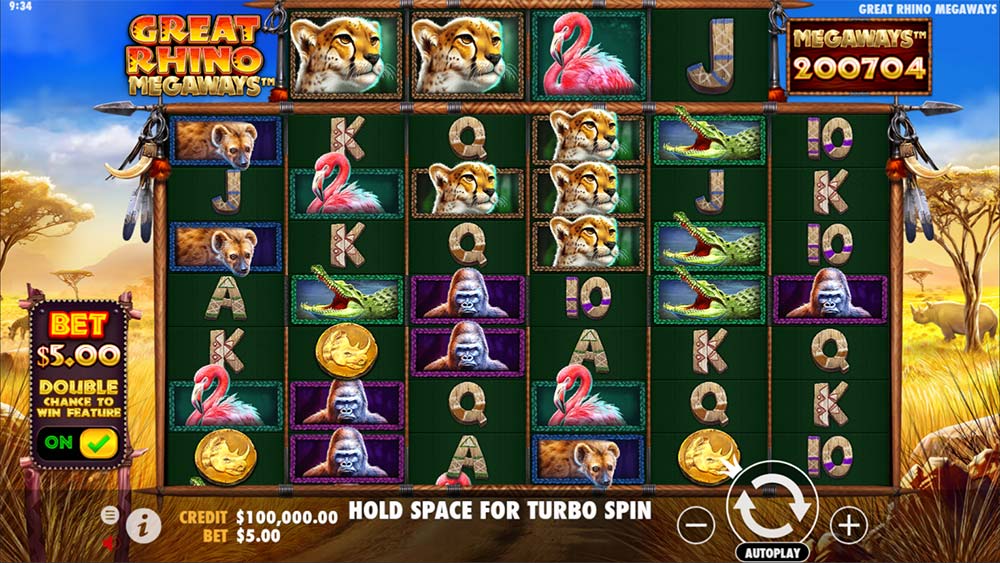 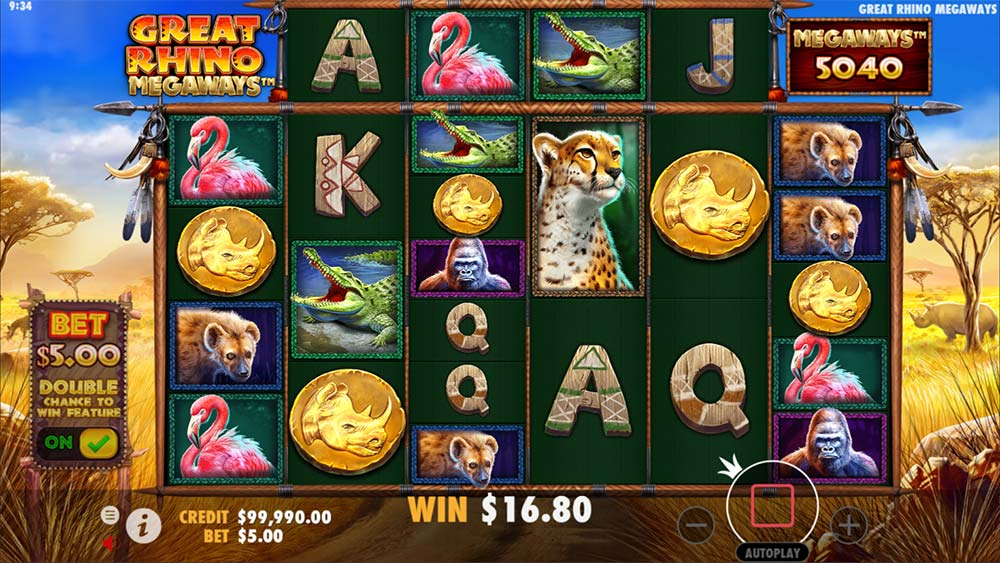 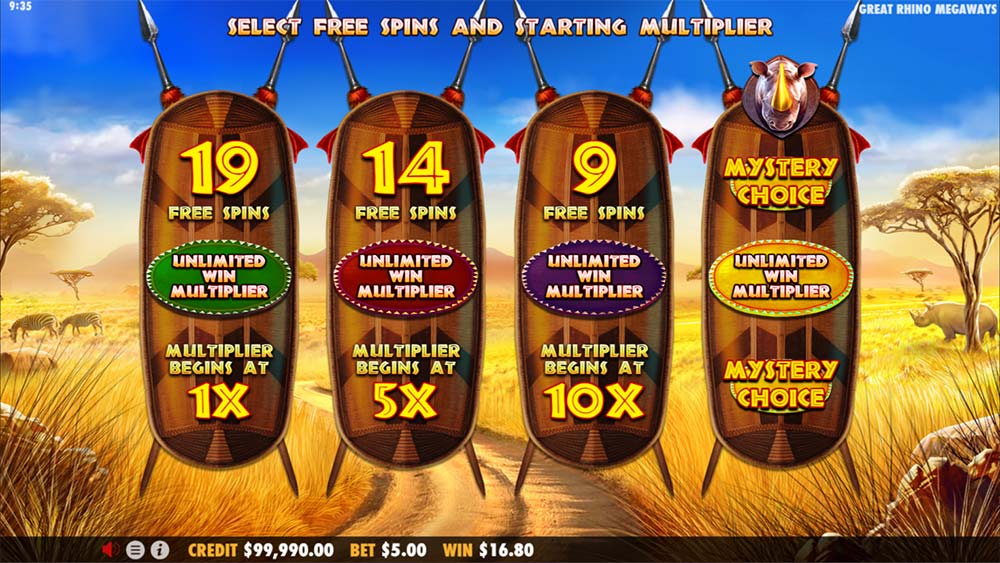 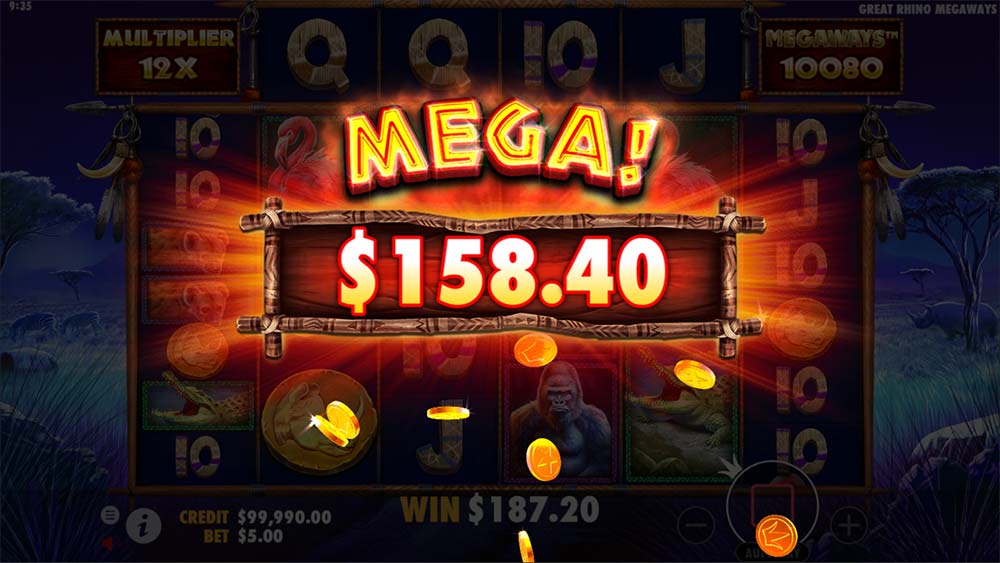 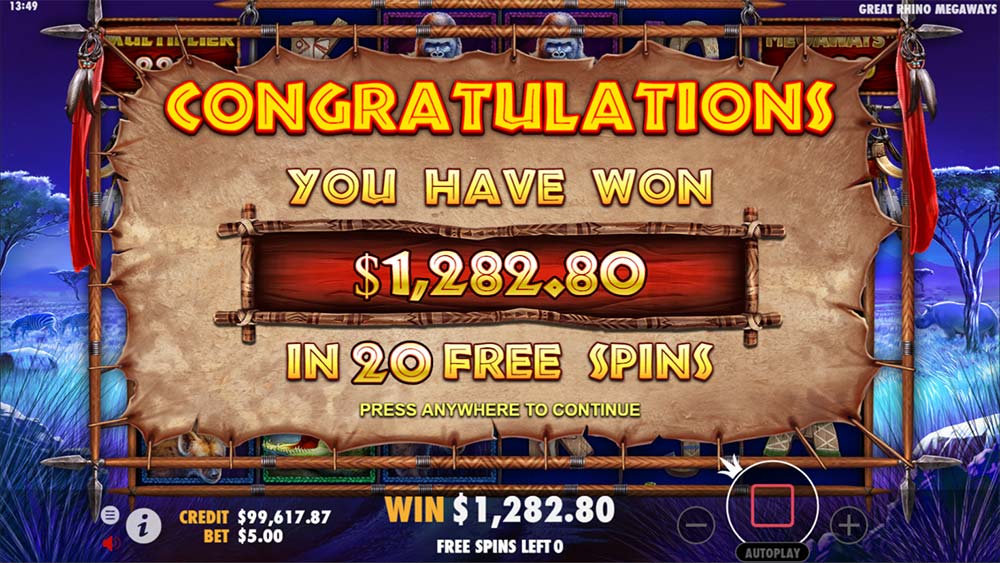 Activating the Double Chance side bet feature costs 25% of the current stake size to activate. This feature adds more scatters on the reels doubling the hit frequency of the main bonus feature.

The free spins round is triggered by landing 4 or more scatters anywhere on the reels, additional scatters award more starting free spins.

You are then given a variety of free spins options with varying starting spins and multipliers.

Landing 3 Scatter symbols during the free spins round awards 5 more free spins with no limit on the number of free spins.

The Great Rhino Megaways slot from Pragmatic Play is a fairly average megaways slot, the introduction of the Double Chance bonus option increasing the bonus hit frequency is a nice toggle option but apart from this there is nothing new in terms of megaways gameplay on offer.

The Mystery bonus feature is a nice touch for players who like to gamble for the best possible starting bonus combination, but apart from these small features, this is a fairly regular Megways slot in an oversaturated genre already!

If you are a die-hard fan of Megaways slot then it might be worth playing, otherwise, it really offers nothing groundbreakingly new or exciting apart from being Pragmatics first venture in Megaways slots.