We Check Out Honey Rush the New Play’n GO Grid Slot to See If It’s As Sweet As It Looks!

Unibet Casino has just added another new Play’n GO slot titled Honey Rush to their casino which is being pitched as their first “hexagonal cascading grid slot”, which sounds like quite a mouthful but think of a honeycomb shaped slot and you have the general idea!

Honey Rush is a grid slot in essence with 37 symbols falling into place onto the grid with each spin, will no regular paylines instead you are looking to score wins through matching symbols landing in a cluster formation with a minimum of 5 awarding a win, more matching symbols giving bigger wins.

Whilst there is no main triggerable bonus round instead there is a base game Rush Meter which activates once a specific number of winning symbols have been collected, the meter will then add more matching symbols onto the grid along with a sticky Honeypot wild creating further wins, there are a number of levels built into this feature which become more potent as you reach the highest level and more wilds are added to the grid.  The final Queen Colony feature will ad 20 matching symbols onto the grid and can lead to some very impressive wins.

The Honey Pot Wilds can also come with a multiplier value (1x to 3x) which really does help increase the winning potential of this slot, especially when you have multiple wilds in play (up to 9x multipliers)!

On top of this feature, you can also be awarded the Worker Colony feature on a non-winning spin, which adds matching symbols to the centre of the grid triggering at least one winning combination.

YOu can check out most of the special slot features in Honey Rush in the gameplay video below. 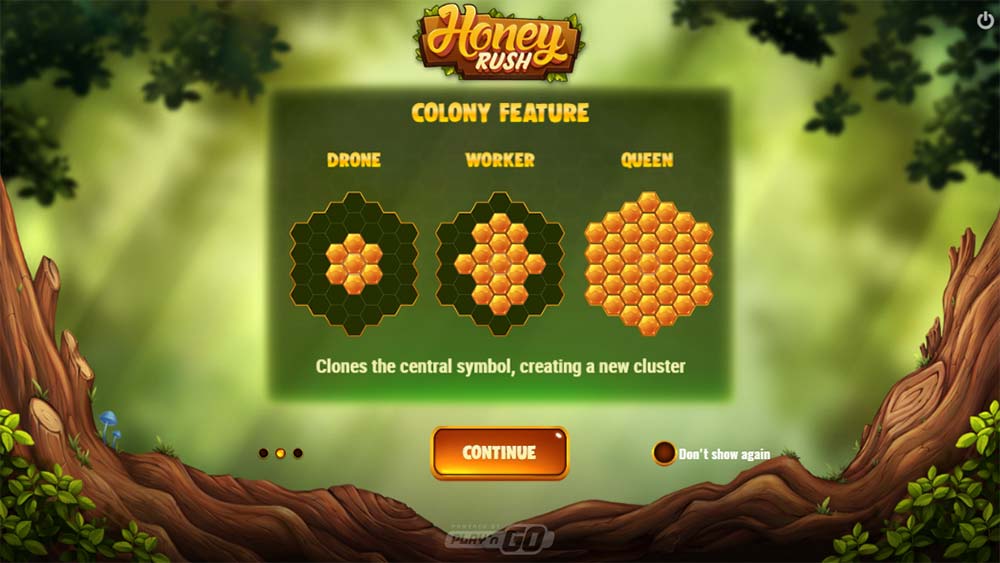 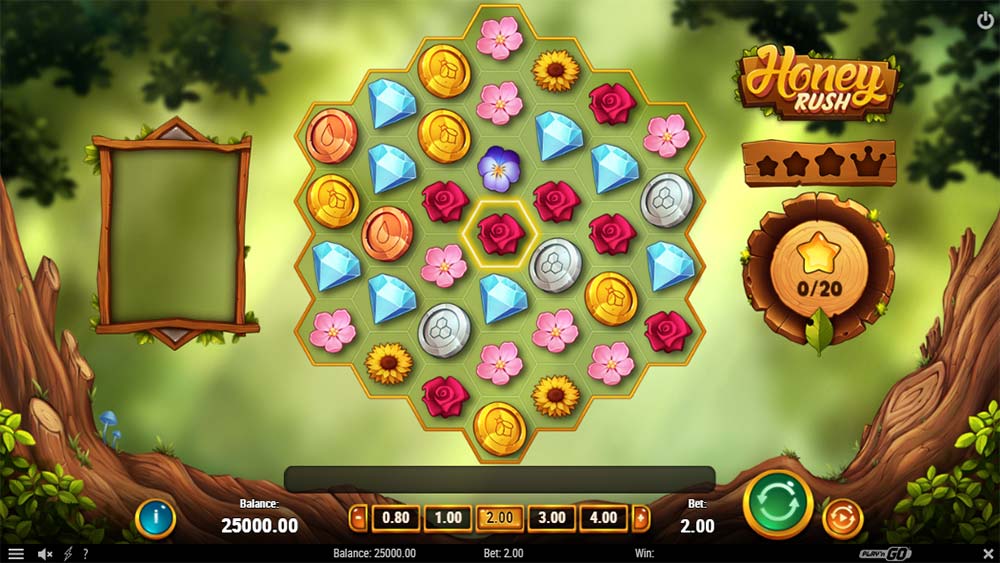 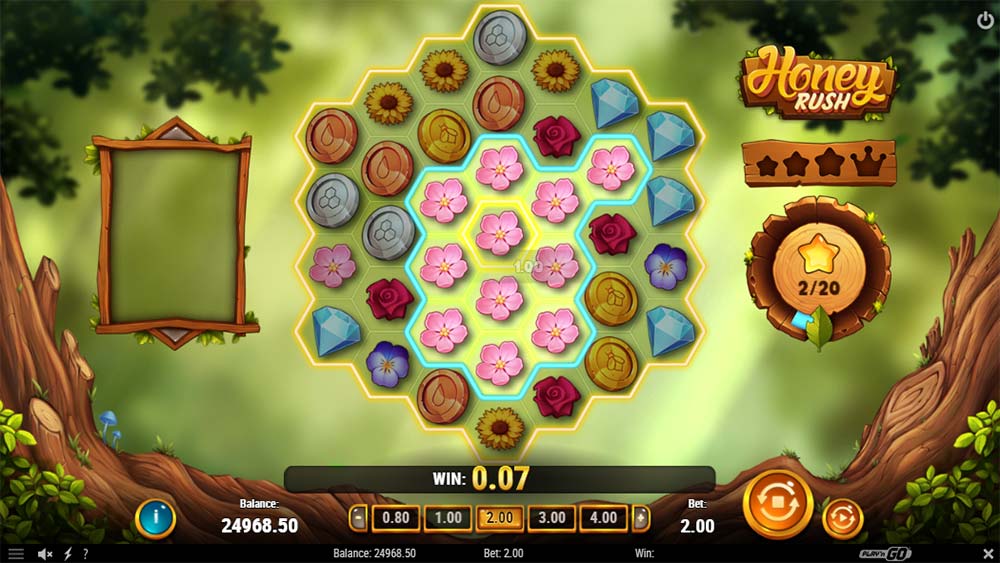 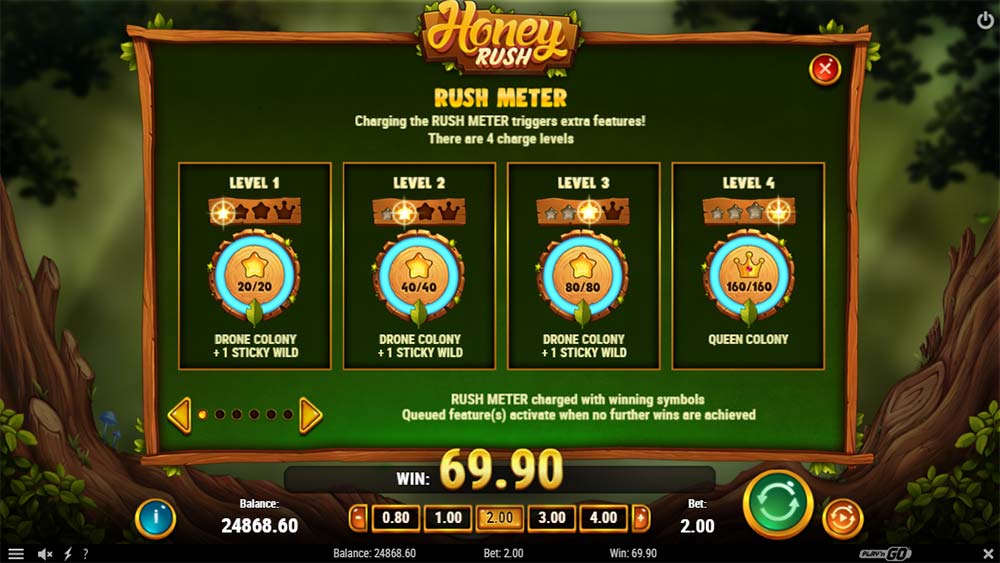 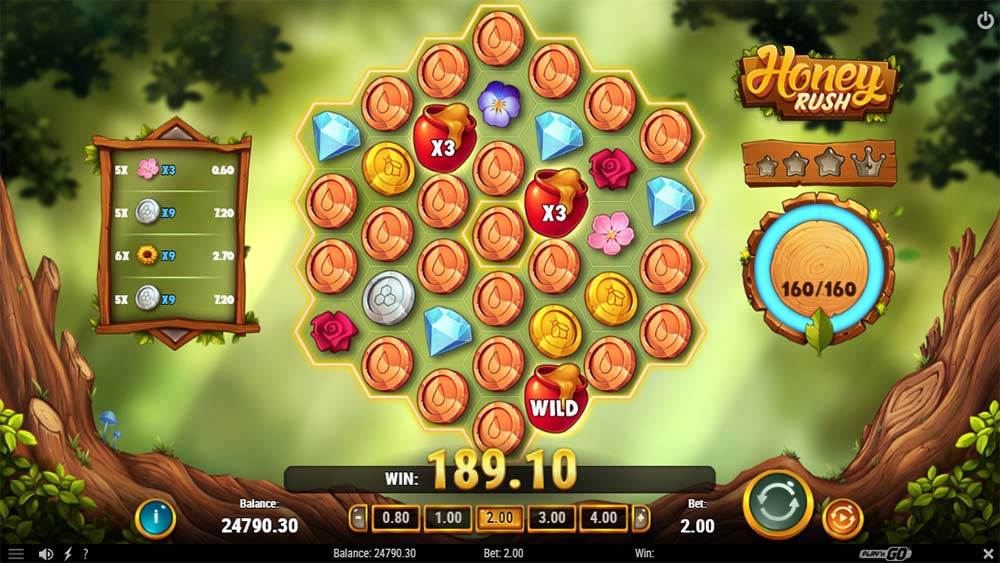 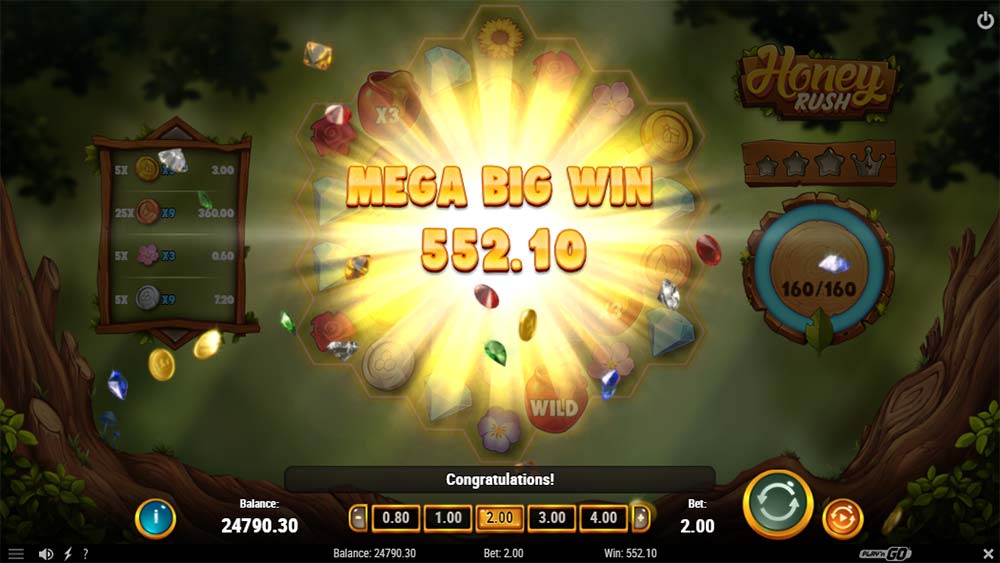 There are a number of levels to this meter which not only add a sticky wild each time but progressively more symbols onto the grid as follows.

The Worker Colony feature is triggered in the base game randonly and will ocly occur after a non-winning spin, a cluster of symbols is added that match the current centre grid symbol, these can come in 3 different sizes as follows.

The Honey Rush Slot is an interesting take on the regular grid-style slot, whilst the lack of a main triggerable bonus round is generally a disappointment for us personally the base game action can be quite exciting with regular mini-features triggering and chains of wins as you approach the Queen Colony Feature where the biggest wins are going to come from.

In our playtests, we did manage several wins over 200x stake, and obviously there is plenty more potential with up to 9x multipliers from the sticky wilds and the higher paying symbols, generally, though expect your final features to be in the 30x to 100x stake range.

Honey Rush is worth a try if you are a fan of grid slots already and are patient enough to play this slot long enough to see its true potential from the final 4th level Rush Feature.