We Try to Beat the Beast in the Kraken’s Lair Slot From Thunderkick!

Casumo Casino has recently added Thunderkicks forthcoming new slot release Kraken’s Lair to their casino as an exclusive release, the official release date for this slot is actually the 19th of February 2020 making Casumo your casino of choice to check out this slot early!

The Kraken’s Lair is the first release from Thunderkick in their “Beat the Beast” series of release which aims to release a wealth of new high variance slots with exciting bonus mechanics.

Kraken’s Lair utilises some core slot features that you will be familiar with if you have played any of the “Book” slots, with just 9 fixed paylines on this machine you are looking for wins that connect using the special Wild/Scatter symbol which will cause them to expand across the reels creating additional wins. The highest paying symbols are capable of producing some very big wins, and with expanding symbols this slot should be capable of well over 1000x stake wins.

The main bonus round is triggered by landing 3 or more of the special Scatter symbols and awards  10 free spins, during the bonus round a Wild/Scatter symbol is added onto the reels during each spin, making wins easier to form along with increasing the chances of a full bonus re-trigger with 1 scatter always in view on the reels.

The main difference between this and a regular Book slot is that no special expanding symbol is selected during the bonus feature, instead you a fully reliant on wins being formed that use the special Wild symbol to make the symbols expand across the reels. This can take some getting used to for players that are used to the Book style slots but thankfully the symbols light up to indicate where the wins are formed. 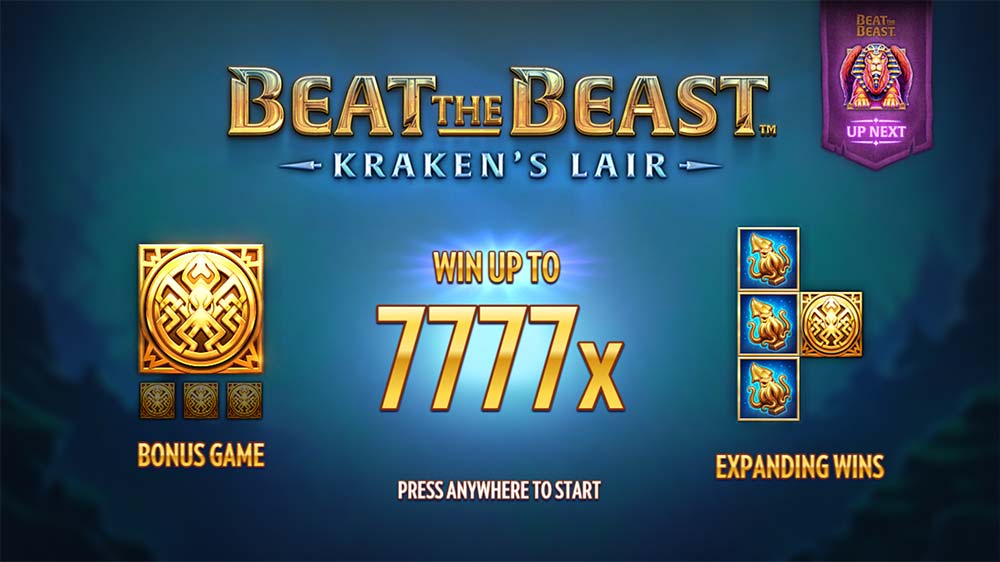 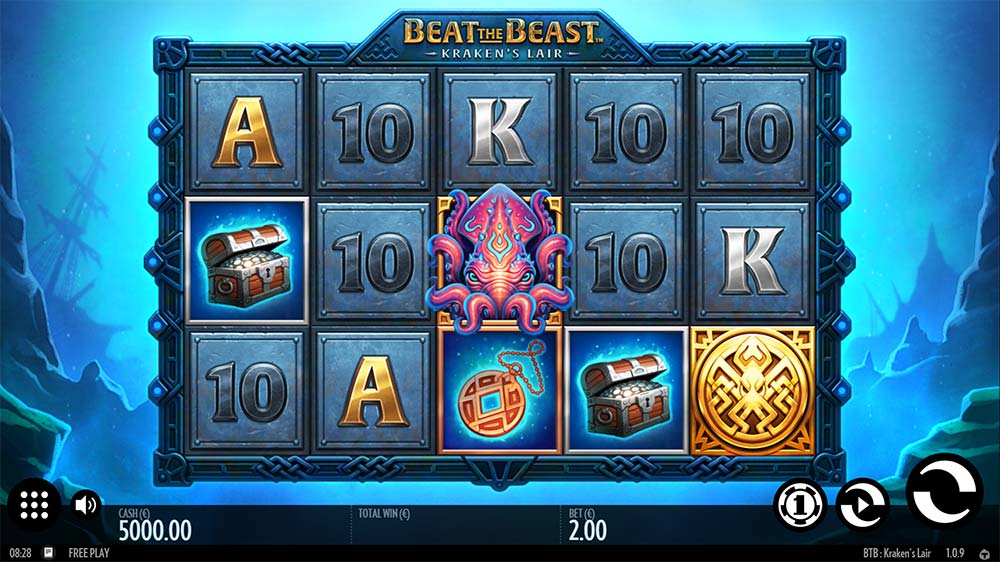 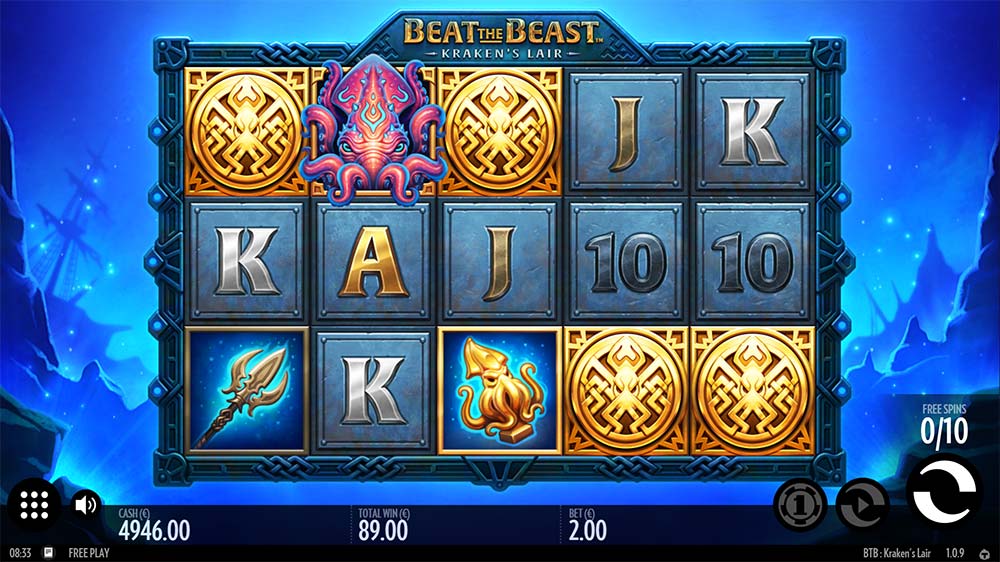 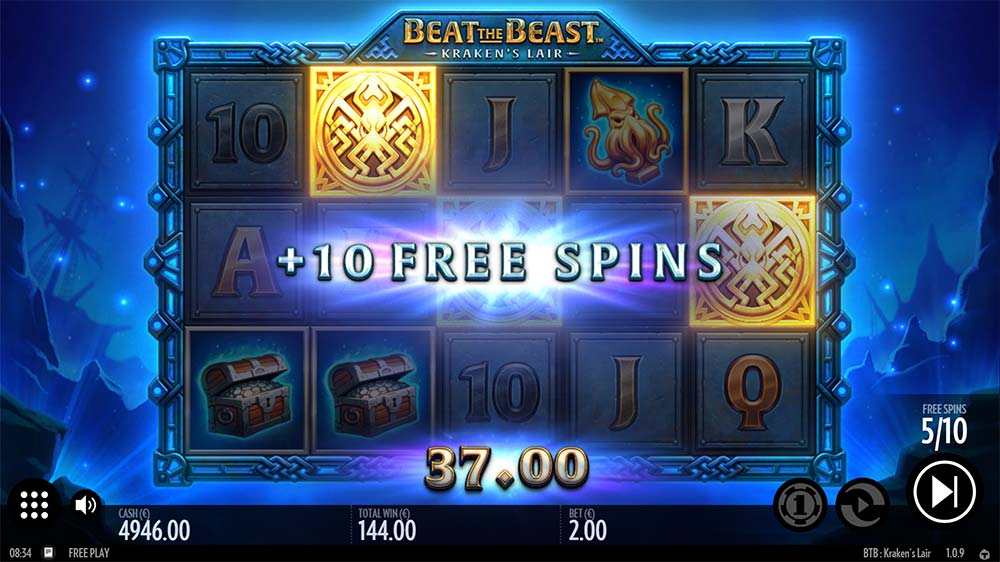 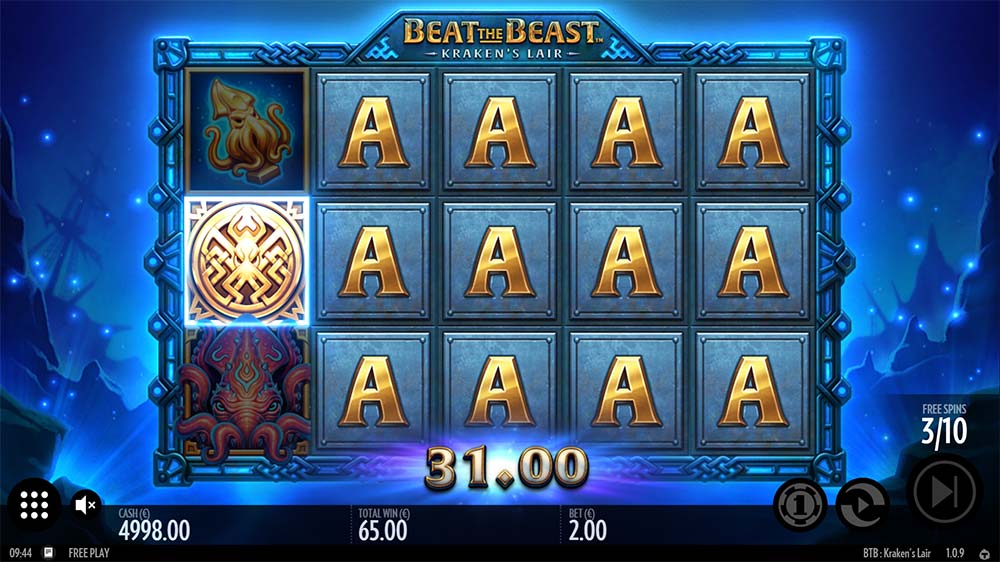 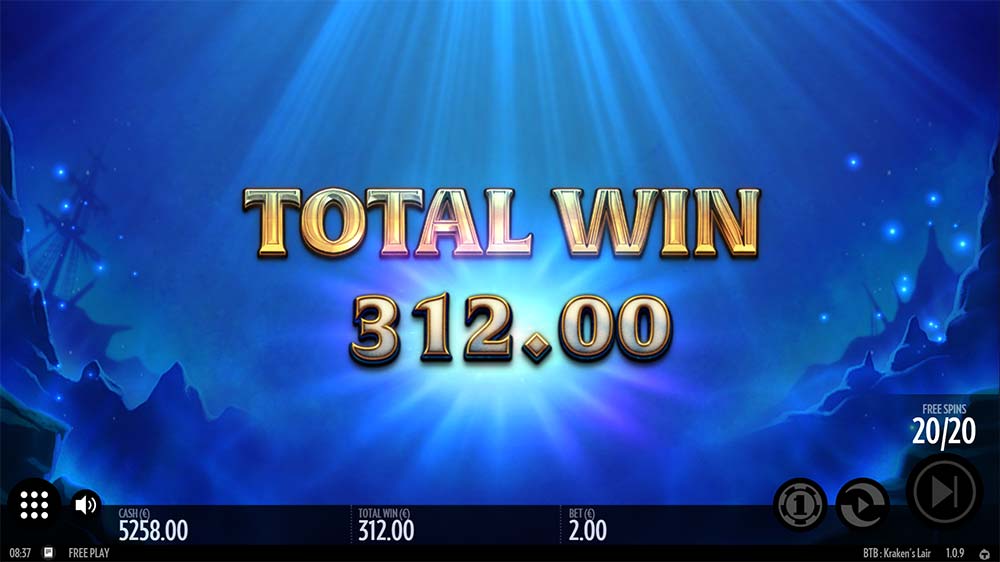 The free spins round is triggered by landing 3 or more of the Kraken Emblem Wild/Scatter symbols anyhwere on the reels and awards a starting 10 free spins.

During the bonus round  on every free spin a Scatter/Wild symbol is added as an overalyed symbol to the reels, making symbols expansions and bonus re-triggers easier.

Symbols expansions only occur when this special Wild symbol forms part of the win on a payline.

The Kraken’s Lair Slot from Thunderkick is an interesting release from the new series of Beat the Beast slots that are forthcoming from this provider, the “Book” style of slot is always popular with players and they have managed to incorporate a new novel feature by incorporating an extra overlayed wild symbol.

Honestly, though we found after a long playtest that we prefer the regular book style of bonus rounds, with a chosen symbol acting as an expander during the bonus round, we did manage wins of over 200x stake along with several re-triggers, the biggest win potential will come from highest paying Kraken symbol which can pay well over 1000x stake!

Worth a play if you are a fan of Book slots already, if not you are probably better of checking out Book of Ra Deluxe or Book of Dead first to check out this style of expanding symbol slot.