We Check Out Play’n GO’s First High Variance Slot of 2020 – Legacy of Dead!

The Legacy of Dead is another Egyptian themed slot release, with the mechanics working in an almost identical fashion to the very popular Book of Dead and Book of Ra slots, expanding symbols during the free spins mode are the key attraction here with wins of several thousand times your stake a distinct possibility.

This style of slot has and always will attract players given the high variance nature, along with full screens of winning symbols along with the chance of multiple bonus re-triggers.

The same 5×3 reel layout and 10- fixed paylines are in use on this slot, as is the randomly chosen expanding symbol during the bonus round, the key difference here is that the starting number of free spins has been reduced to just 8, but the added twist that multiple symbols can be converted into expanding symbols with each bonus re-trigger during the free spins.

Whilst it isn’t going to be an easy task to convert all 9 symbols in expanding symbols, converting 2 or 3 is quite a regular certainly during our playtests.

In essence you have a Book of Dead slot with a slight twist to the bonus round mechanics, given the reduced number of free spins, but potential for multiple expanding symbols we suspect this maybe even more volatile than Book of Dead! 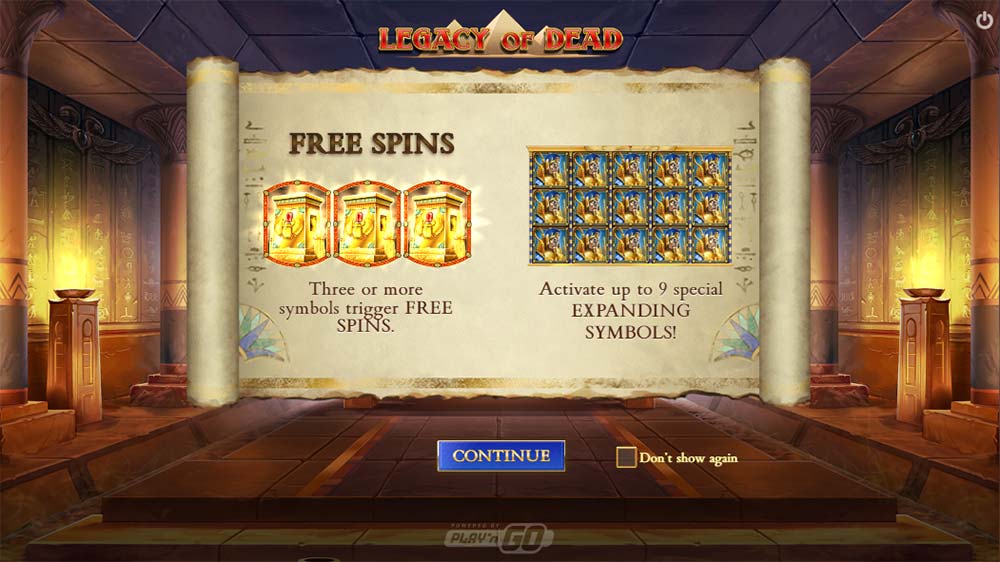 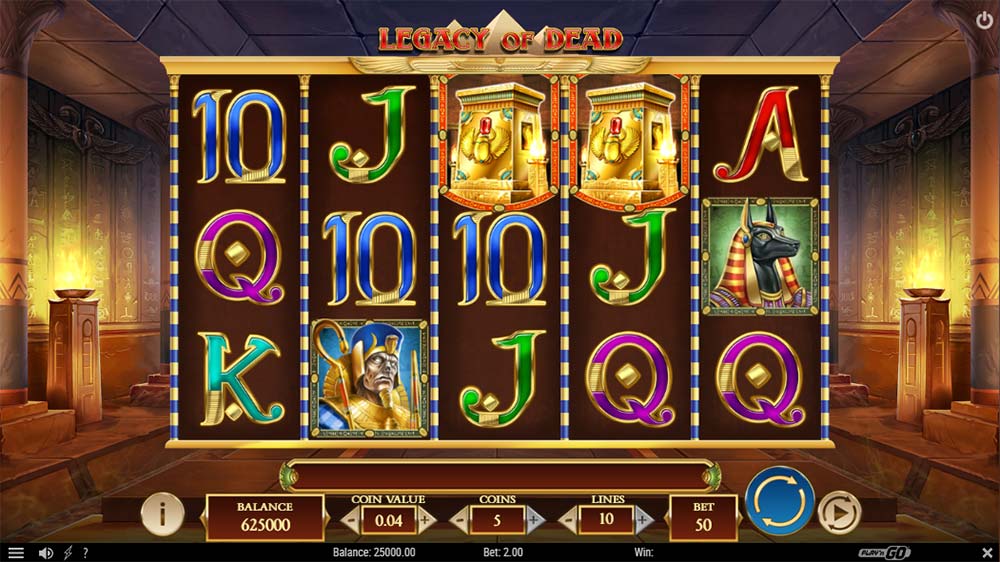 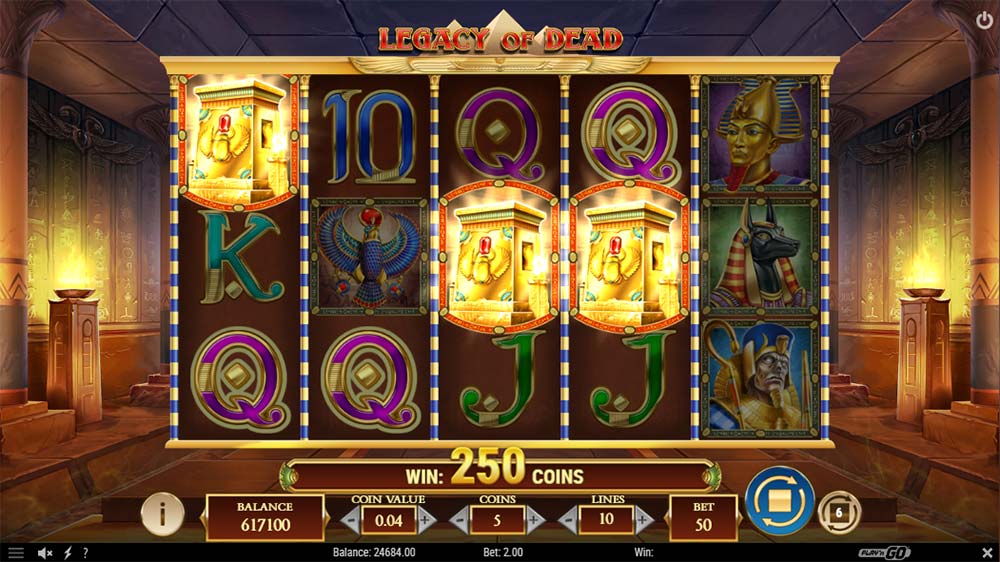 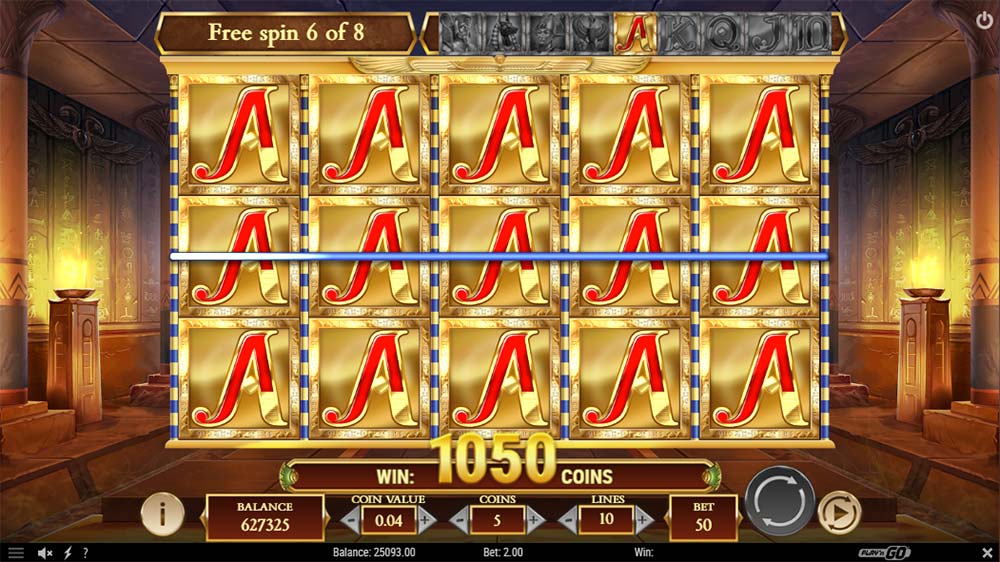 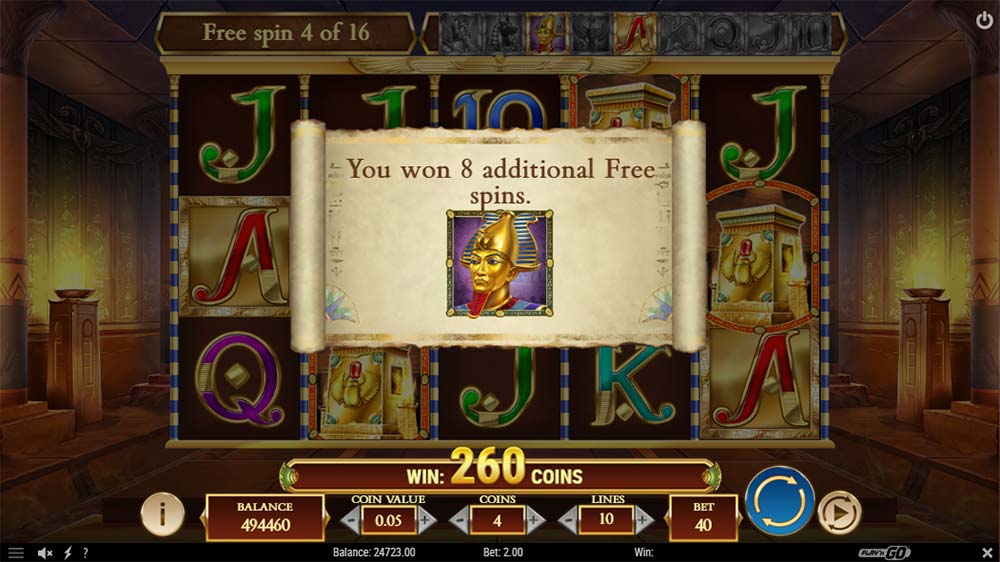 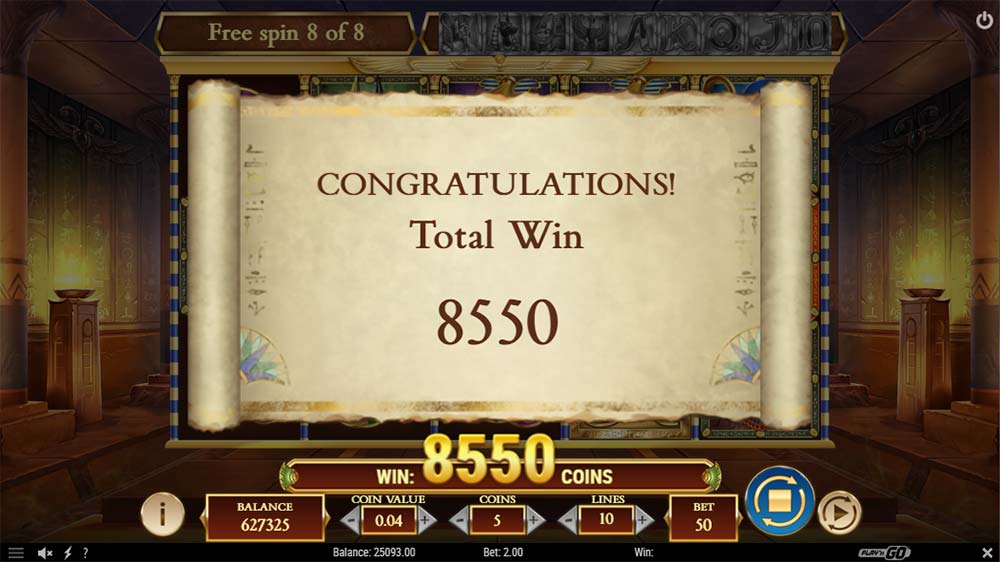 The free spins round is triggered by landing 3 or more Scatter symbols anywhere on the reels and awards an initial 8 free spins.

Before the free spins begin a symbol is selected at random to act as the expanding symbol during the bonus round, when enough of these symbols land in view they will expand to cover all the reel positions and be paid out on all 10 paylines, the key point here is that they do not need to be on a payline, just visible on any of the reels.

Re-triggering the bonus round not only awards a further 8 free spins but another symbol is also awarded to act as an expanding symbol, more re-triggers awards further free spins and additional symbols.

The Legacy of Dead slot from Play’n GO certainly isn’t going to win any awards for new innovation, it’s a tried and tested style of slot,  given the super high variance will still appeal to players who enjoy the Book of Dead and Book of Ra machines.

The small twist to the gameplay allowing for additional expanding symbols certainly does makes this bonus round even more interesting, and the excitement of re-triggers is heightened also.

During our playtests, we did manage several bonus re-triggers with 3 expanding symbols being our best result, with wins in the range of 20x stake to well over 200x stake, and obviously heaps more potential if the high paying symbols become selected as expanding.

Well worth checking out if you are a fan of high variance slots, nothing groundbreaking in terms of new features but a solid high variance machine that fans of Book of Dead will love!