Casumo Casino has just added the latest slot release from Thunderkick to their casino titled Pink Elephants along with the awesome Planet of the Apes slot from NetEnt, Snow Leopard from Barcrest and Reactoonz from Play’N GO.

The Pink Elephants slot is due for official release on the 1st of November but Casumo regularly has early access to slots especially from Thunderkick and has this awesome new title available to play right now.

The Pink Elephants is a 6×4 reel slot that has 4096 paylines making it an extremely volatile release with comparisons to slots such as Raging Rhino from WMS, but thankfully whilst there are some obvious similarities, there are enough unique features to make this slot worth checking out.

The base game is a fairly standard affair, with several small and large stacks of the Pink Elephants, a mixture of high and low paying symbols, very few wilds, and the special Magic Peanut Scatter symbol.

Whilst some big wins are possible in the base game the main bonus round is where the action really heats up with up to 4 different symbols being able to be transformed into the highest paying Pink Elephants symbols, along with re-triggers and extra spins for reaching specific stages.

The one twist to the base game is the Mystery Scatter Symbol feature which can activate on any base game spins and will add from 1-5 of the special Magic Peanut Scatter onto the reels, either making it much easier to trigger the bonus round or simply instantly triggering it! 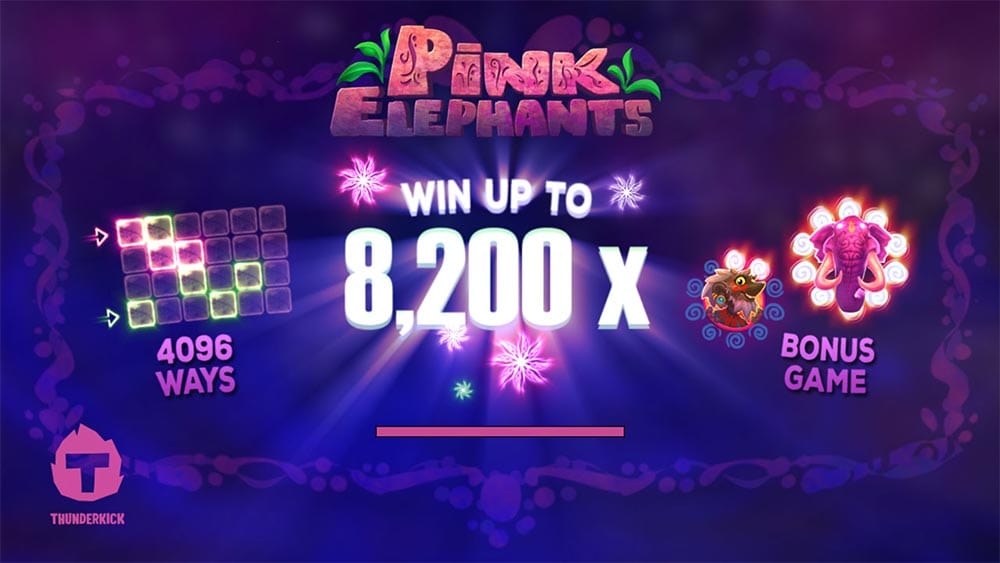 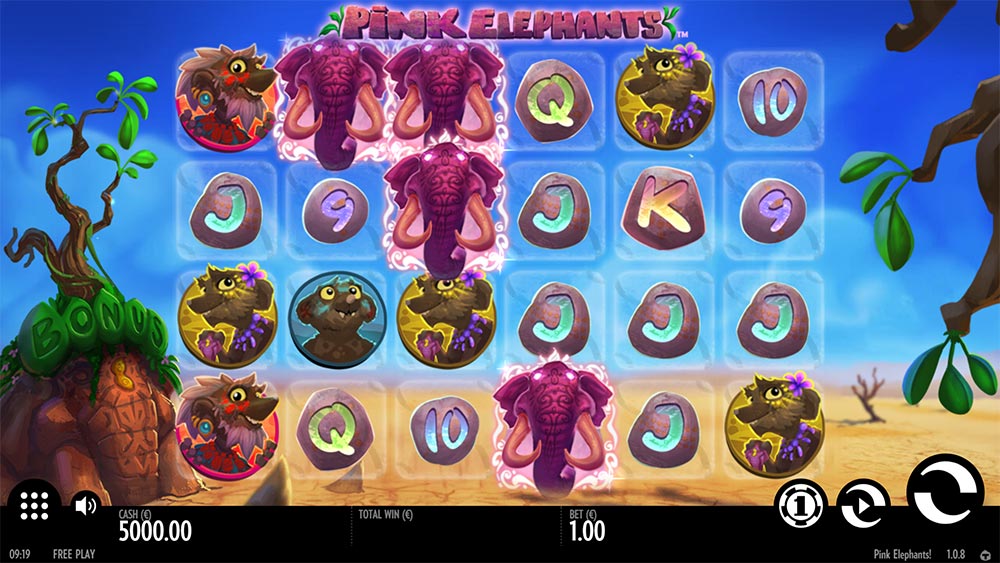 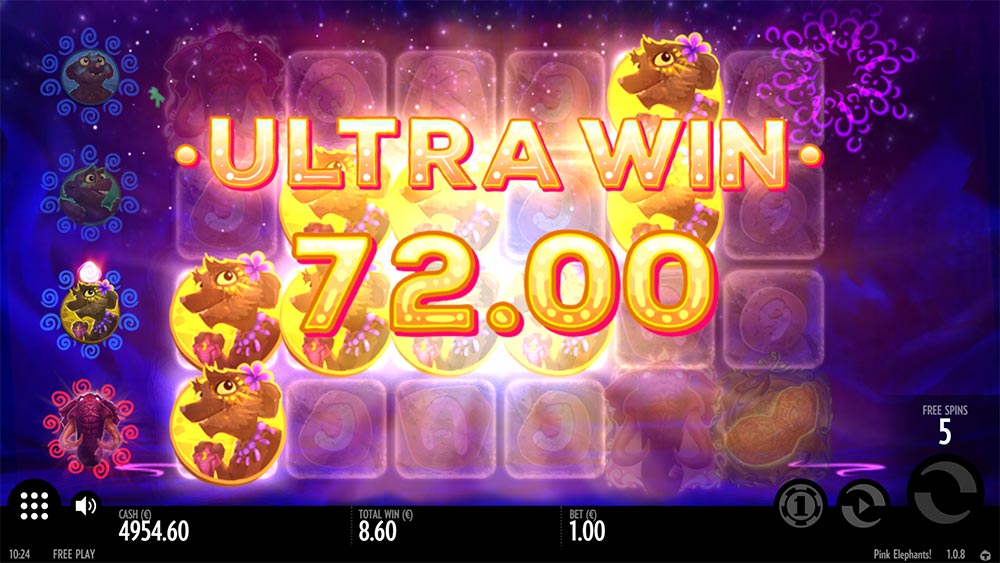 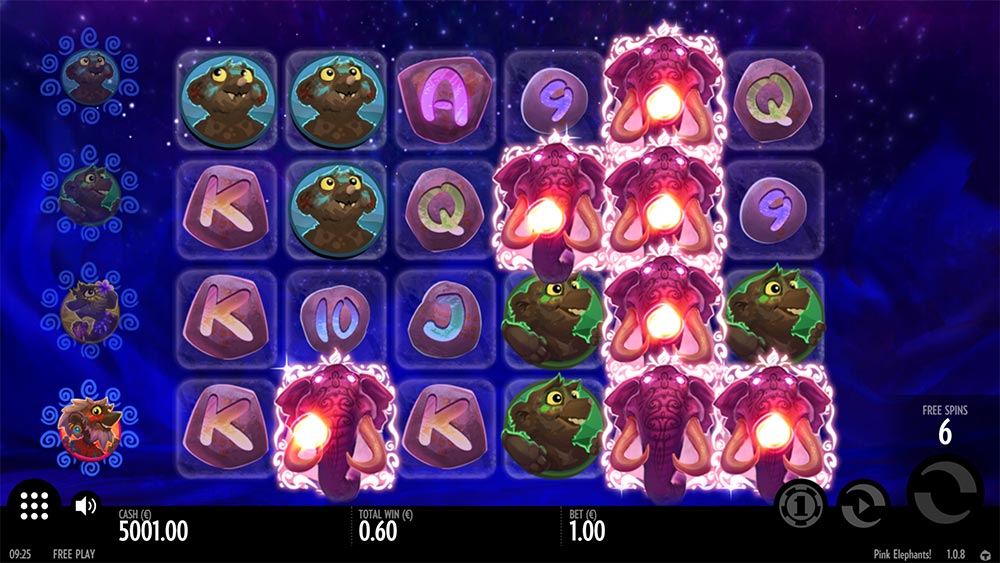 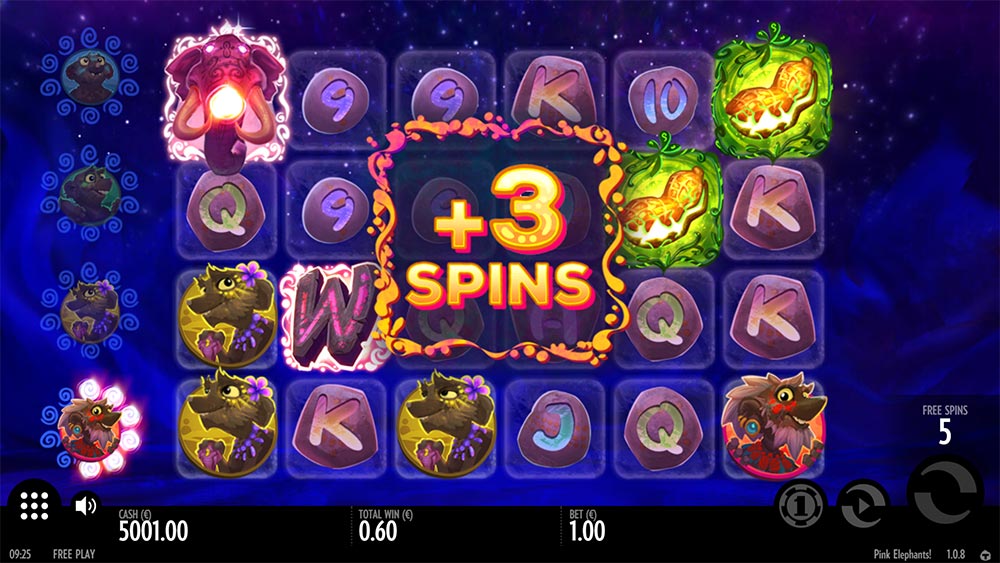 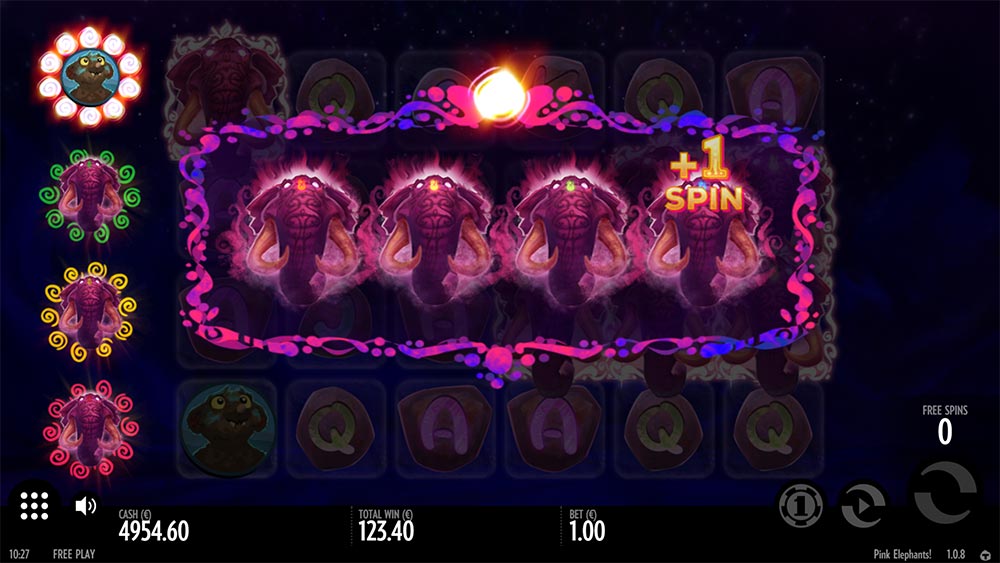 The bonus round in Pink Elephants is where all the main excitement occurs and this is triggered by landing 3 or more of the special Peanut Scatter symbols anywhere on the reels, additional scatters grants more initial free spins as follows.

It is also possible to re-trigger the free during the bonus round with a minimum of 2 scatters which grants an additional 3 free spins to the bonus round.

The main aim of the bonus round is to collect as many of the Elephant Orbs as quickly as possible during the free spins which are only present on some the Pink Elephants on the reels, with collection meters on the left-hand side of the slot recording your current progress.

10  of these orbs are required to fill each symbol meter and once reached this is filled all of these symbols are transformed on the reels into the Pink Elephant symbols and also awards 1 extra free spin.

There are four different character symbols to upgrade into Pink Elephants but this will require a high number of starting free spins, or some re-triggers during the bonus round.

Pink Elephants is another very good slot release from Thunderkick, make no mistakes this is a high variance slot and you are going to have some very good and bad bonus rounds from it.

In our playtests, we had bonus round end results in the range of 5x stake to well over 250x stake, and only once unlocked the 4th symbol upgrades with just a few spins left in the bonus.

Whilst the base game does feel reminiscent of the Raging Rhino style of slot, the bonus round is a completely different beast that is still capable of an 8200x stake win.

One to check out if you are a fan of high variance slots.