Journey to Asgard to Check Out the New Ring of Odin Slot From Play’n GO!

Casumo Casino has recently added new slot from Play’n GO titled Ring of Odin which is themed around to Odin’s fabled ring Draupnir which had the power to multiply itself into nine rings every ninth night, this feature has been replicated very nicely into the slots special features.

Using a regular 5×3 reel set and just 10 fixed paylines, the Ring of Odin slot seems to be a higher variance release and actually has 2 ways to trigger the main bonus feature with a few subtle differences.

Firstly you can land a single Scatter in the middle reel when Odin’s Ring randomly appears in the middle reel to trigger 4 Multiplier Free Spins, during these spins any scatters award extra free spins, the central ring is the key to deciding which symbols become replicated on the re-spins with 9 rings covering the middle reels completely and replicating the chosen symbol on each re-spin.

The bonus round can also be triggered fully by landing 3 regular scatters symbols, which grants free spins where the ring activates on every spin, leading to Draupnir Re-Spins also.

The mechanic may sound quite confusing but essentially you need a decent high paying symbol to be chosen from landing in the ring, collect several more of these on the next re-spin to award lots of extra re-spins, and then on the Draupnir Re-Spins land a full screen of matching symbol or wilds, with the chosen symbols already being fully stacked on the middle 3 reels this isn’t as difficult as it sounds.

The addition of multipliers in one version of the free spins that can go up to 9x give this slot some extra potential too. 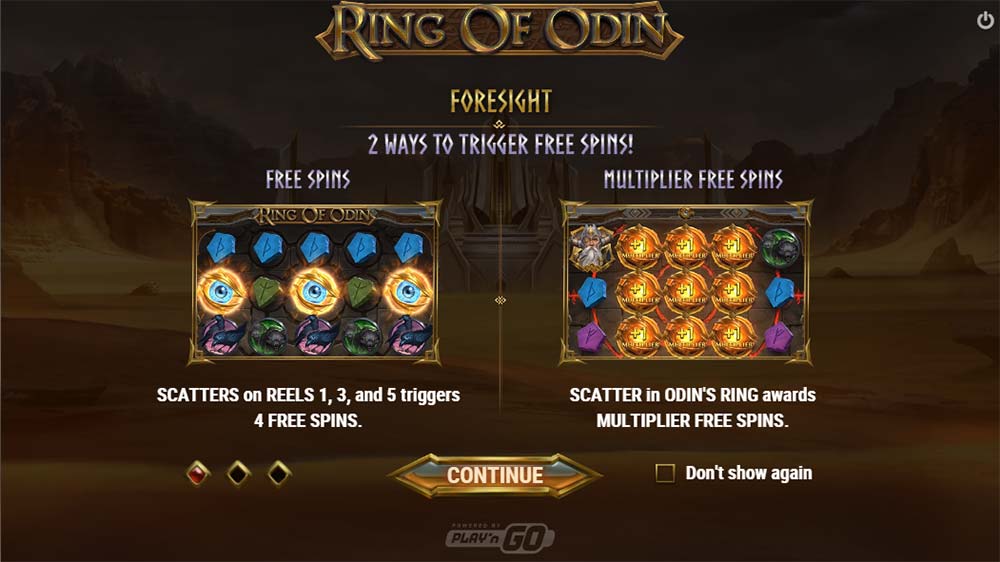 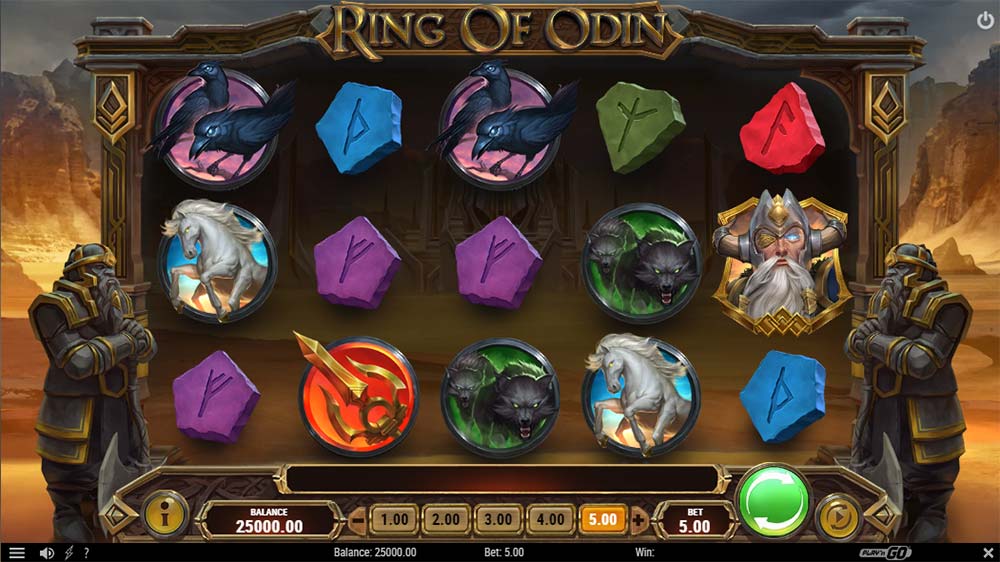 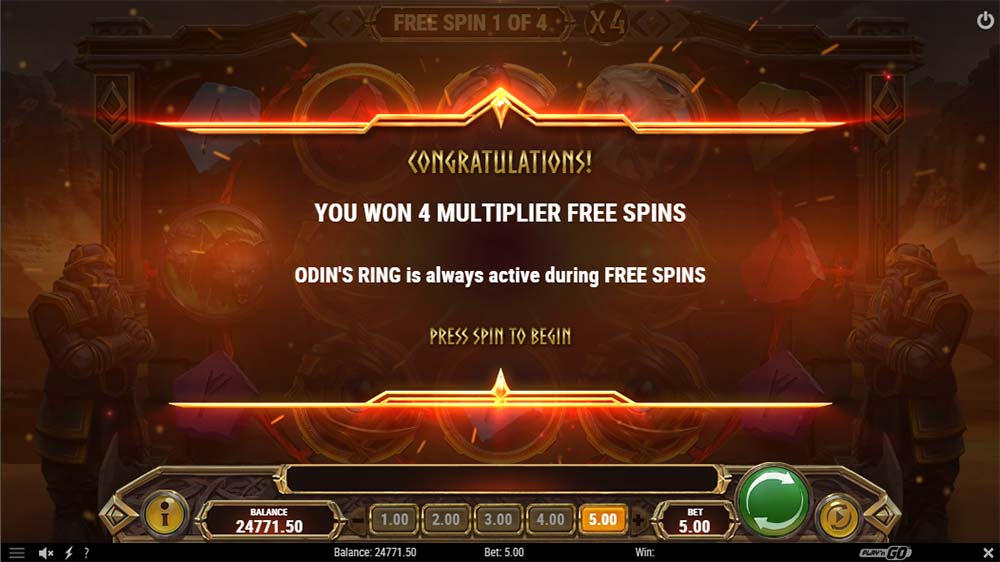 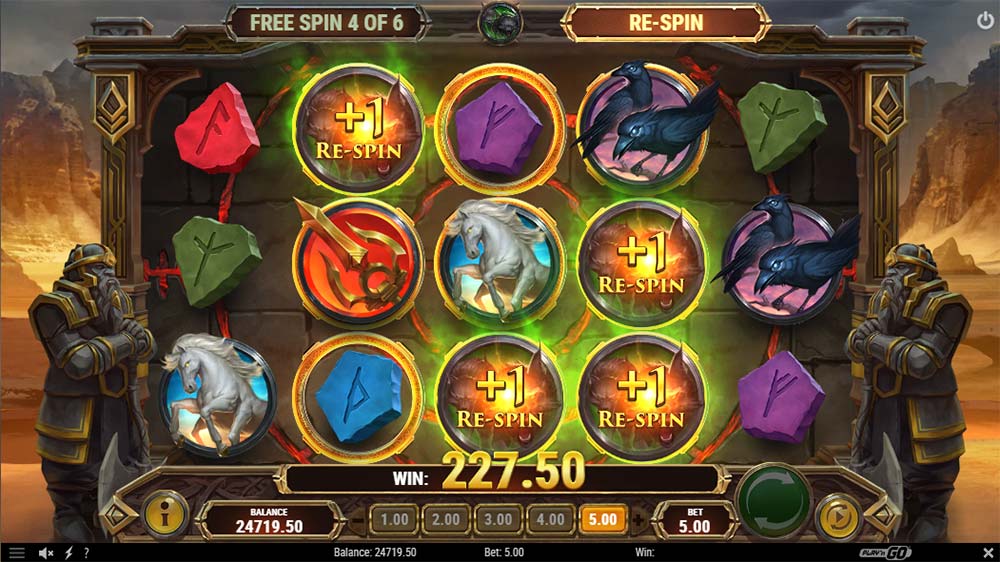 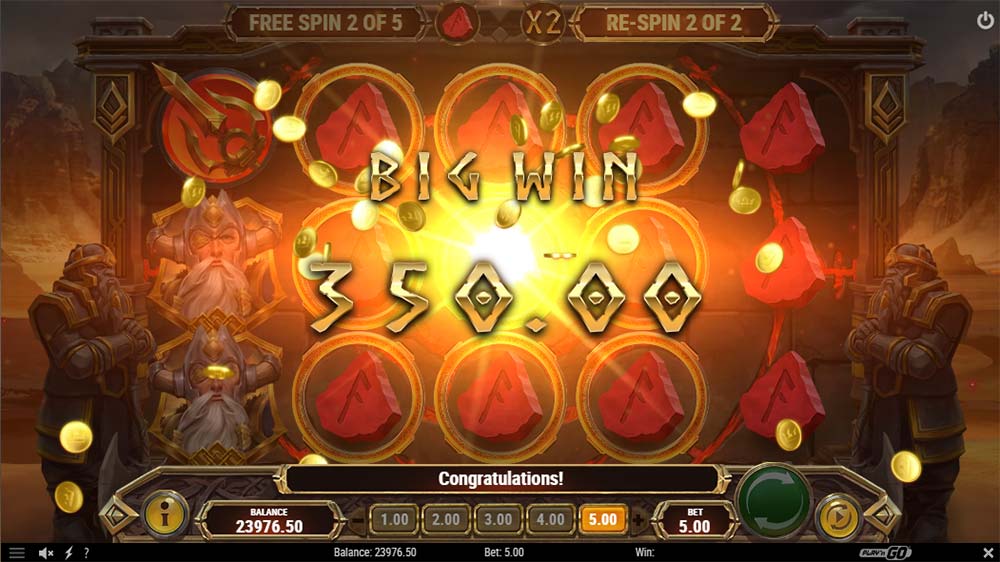 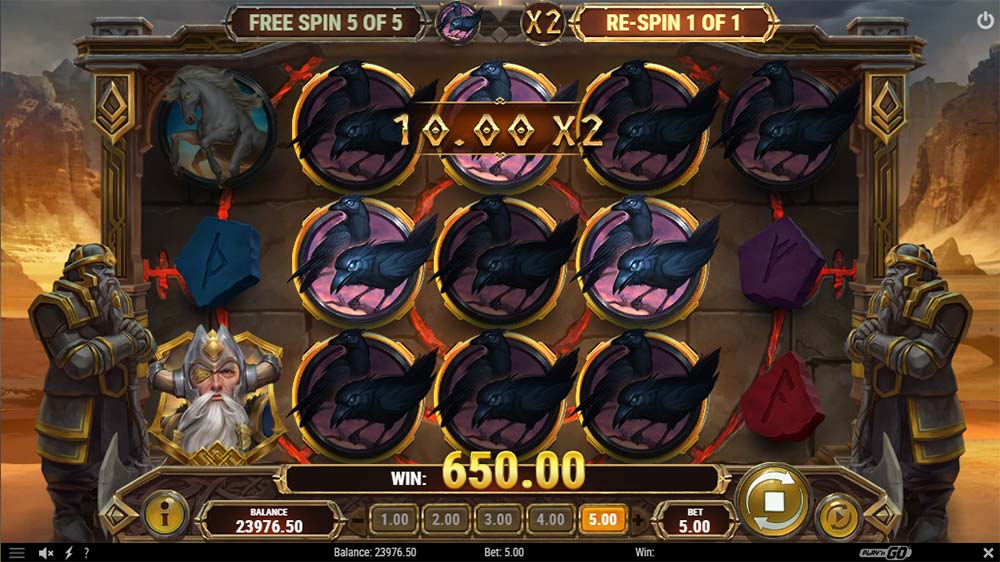 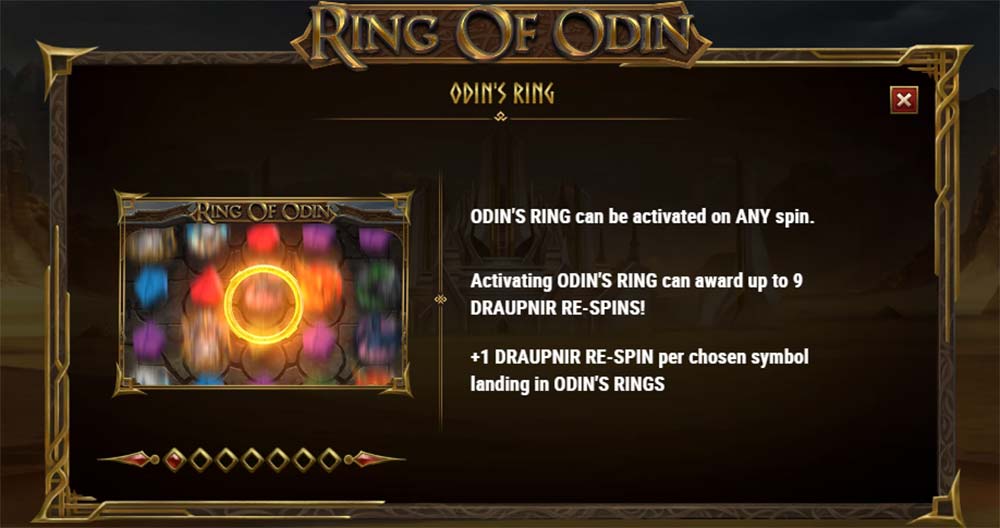 The Odin’s Ring feature can activate on any spin, placing a golden ring in the centre of the middle reel, the symbol which lands in this position is selected for the respin, any additional matching symbols that land in the 9 rings during the response award DraupNir Re-spins with stacked matching symbol held in place in the middle 3 reels ( 9 ring positions)

The regular free spins bonus round is triggered by landing the scatter symbol on reels 1, 3 and 5 and awards a starting 4 free spins, Odin’s ring feature is activated on every single free spin and you earn +1 extra spin for each scatter that lands during these spins.

The Multiplier Free Spins mode is activated when the scatter symbol land in Odin’s Ring, this can award up to 9x multiplier with the same Draupnir Re-spin mechanic in play.

The Ring of Odin slot from Play’n Go is a visually nice release, we did find the gameplay a little confusing initially and a lot of stages to go through to get the big wins, but if you are seeking something a little more unusual then this may well appeal.

The key to the biggest wins is from initially getting a good symbol selected in the ring, then earning lots of re-spins for that symbol, then finally landing a full or near full screen of this symbol in the re-spins.

We did manage several wins over 100x stake in out playtests but it looks like the Multipliers are really needed to see this slots biggest wins, and we did find the gameplay somewhat frustrating at times with 3 completely stacked reels of matching symbol that still require a matching symbol to connect to pay anything!

Worth a play to see if you can get a good multiplier free spins bonus but possibly not a long term appeal from this machine.