We Check Out Troll Hunters 2 From Play’n GO, Play It Exclusively Early at Unibet Casino!

Unibet Casino has recently added an exclusive new slot called Troll Hunters 2 from Play’n GO to their casino along with a months worth of exciting promotions all tailored to this slot release along with lots of amazing prizes to be won.

Troll Hunters 2 is another grid-style slot from Play’n GO who have had plenty of success in the past with this unusual style of slot, which features a grid-style layout and tumbling reels where the horiizontal and vertical wins remove the symbol blocks, creating wilds in the process and potentially leading to the further wins.

To spice thing up in Troll Hunters 2 there are rising multipliers in the base game, so for every successive win the multiplier grows by one in value. Along with this feature, there are also collection meters which can add a variety of multiplier wilds onto the grid to help clear out even more blocks and lead to bigger wins also.

Trigger ing the bonus round is done by removing enough blocks from the grid to make the BONUS text visible, which can be seen behind the slot once blocks start to be removed, the position of this BONUS text does alter during gameplay, the higher up it moves the easier the bonus round becomes to trigger (less blocks need removing).

There are a couple of nice feature that gives this slot a spike to the variance, and these include the special Win Spins which can be earned during the bonus round with add a 2×2 block of multiplier wilds into the reels, the chance the re-trigger these win spins and retian the multiplier value and the fact that clearing the entire grid of every symbol results in wins of 1000x and up to 5000x when the multipliers are added! 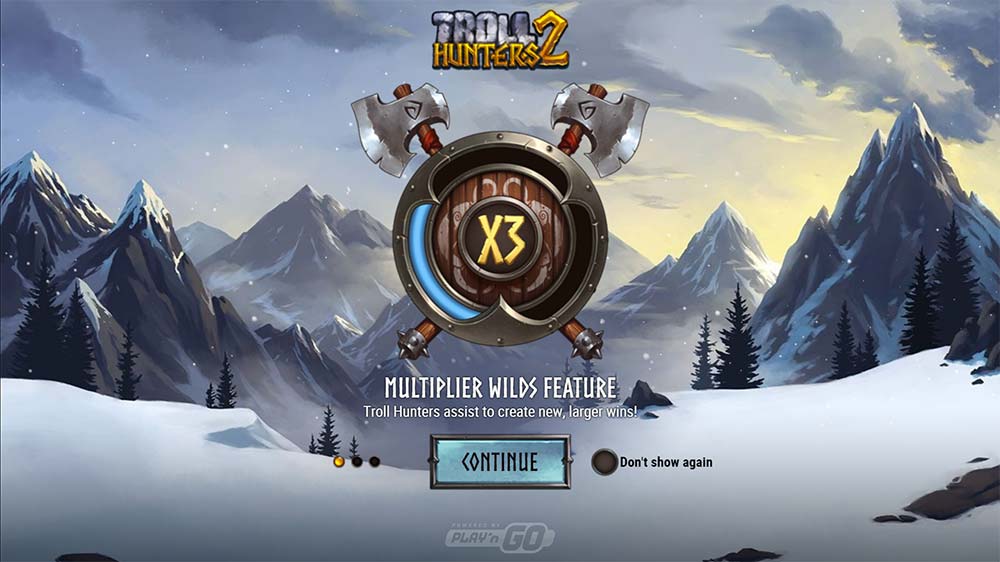 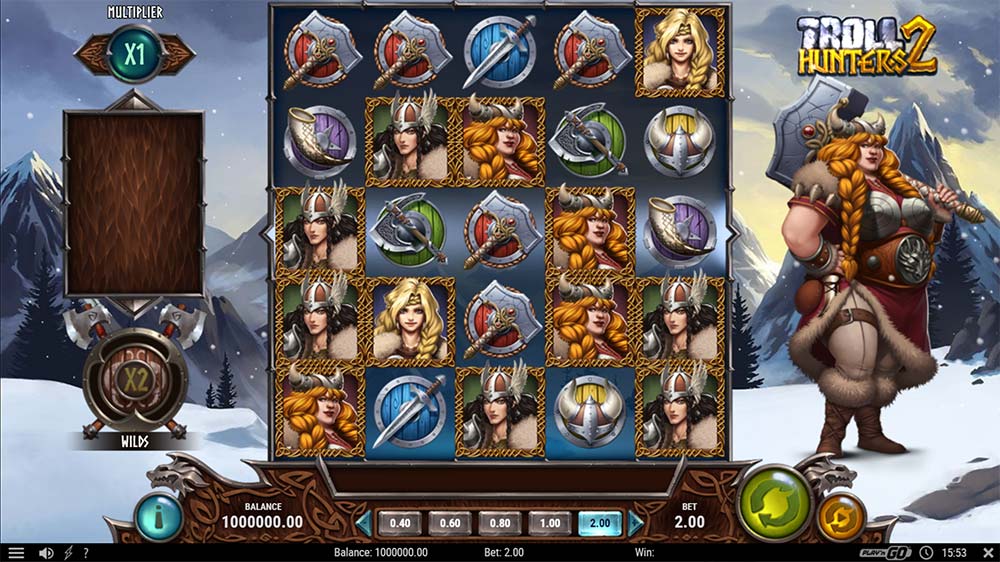 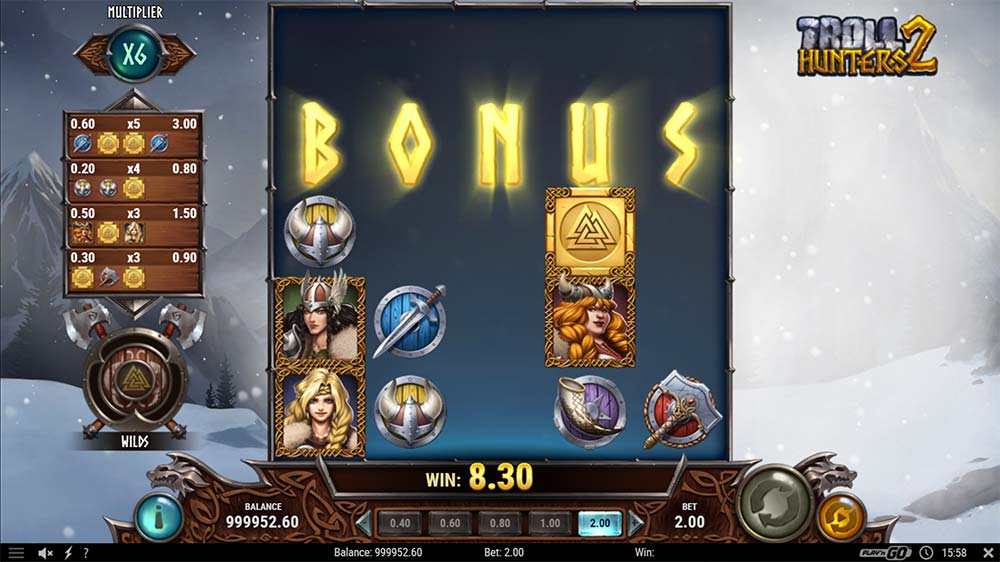 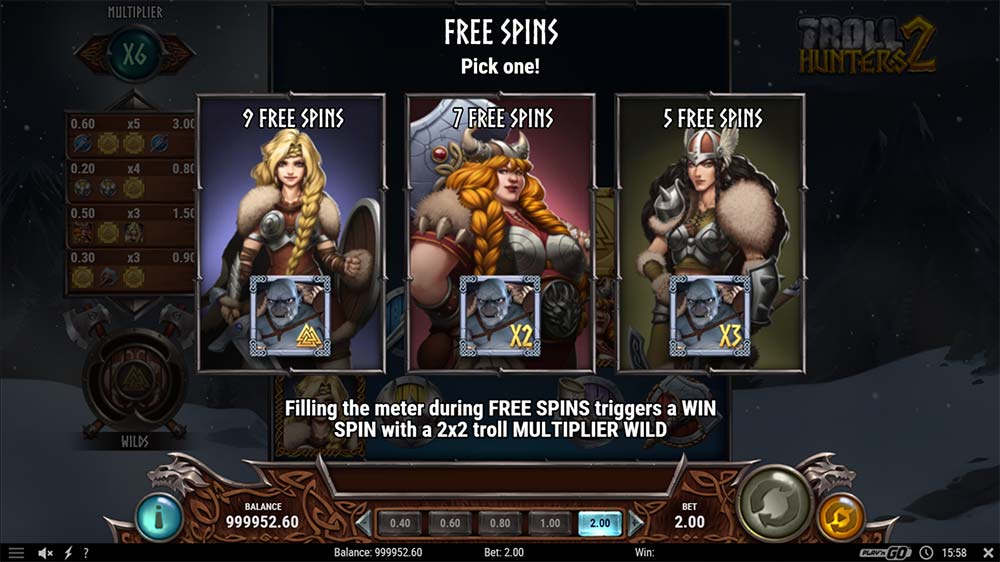 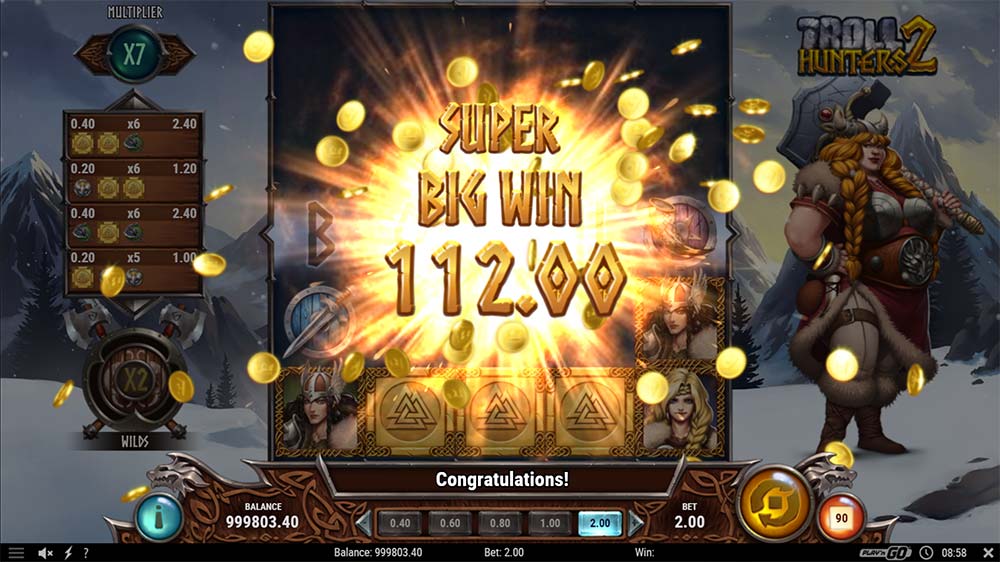 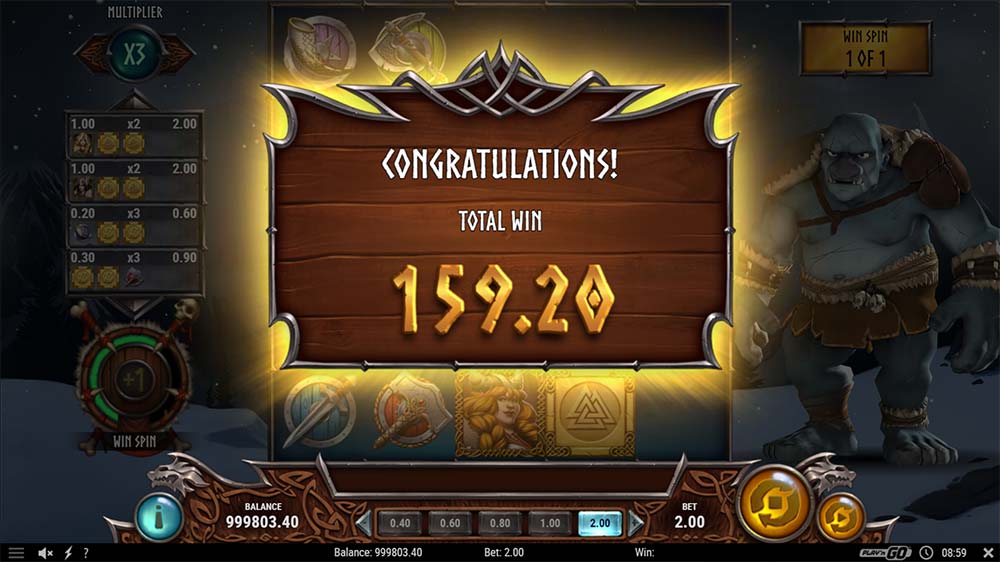 Multiplier Wilds are added to the grid once the power meter in the lefthand corner is completely filled, the power meters are filled by scoring enough wins in a row, with 5 of a kind wins filling the meter a lot faster.

The Multiplier wilds can vary from 1x to 3x and can add 1 or 2 of these onto the grid in random places.

The Free Spins are triggered in the base game by revealing the BONUS text completely on the grid, you are then given a choice of 3 options with varying multipliers and free spins on offer as follows,

During the free spins there is a special Win Spin bonus meter in play, filling this up will trigger a “win spin” where a 2×2 Troll Wild symbol is added to the grid guaranteeing wins, the multiplier value still increases with each successive win and the key point here is that you can re-trigger the “win spin” and retain the current multiplier value at the start of the newt “win spin”.

Troll Hunters 2 is a solid grid-style slot release from Play’n GO, the graphics are high quality and the action comes thick and fast thanks to the extra wilds and fairly regular bonus rounds.

In our playtests we got the distinct feeling that slot seemed fairly low variance with bonus rounds rarely exceeding the 50x stake levels, but the key to this slot is the win spins where extra wild multipliers are added and the fact that you can re-trigger a win spin and retain the current rising multiplier level, and this is where the win potential really ramps up very quickly.

Our best bonus round after some extended playtesting was well over 400x stake with 3 win spins triggering back to back and a 12x multiplier gained.

This altered our opinion of this slot slightly, because although the hit potential seemed a little weak at the start of our playtests there are some unusually big wins to be had from this slot also including clearing the grid for 1000x wins, if you are already a fan of grid slots then certainly check this one check out the potential from the win spin feature.