Review and Where to Play the Victorious Max Slot From NetEnt

The Popular Victorious Slot Is Now Back With a MAX Volatility Setting!

Hello Casino has recently added NetEnt’s newly refreshed version of the popular 243-way slot Victorious MAX, for those unaware NetEnt has several titles where the player gets the option to tweak the variance and volatility of the slot, basically more risk for more potential rewards using the MAX version of the game.

This time around they have selected the popular Victorious slot which it its default form was a very solid 243-way slot that was capable of producing some nice wins already, selecting the MAX version which can be toggled on and off will give you a 6x multiplier during the bonus round instead of the regular 3x, and the symbols will generally pay more too, most noticeably on the highest paying symbols and 5 of a kind wins. Boasting wins of up to 7000x stake the highest paying symbol has been given a major boost in win potential!

Of course there are going to be some negatives to counteracts these boosts to win potential, so things like base game and free spins hit frequency and bonus frequency will have been tweaked also to balance the gameplay and overall RTP, in essence, the option is for you to decide whether you want more to play a more risky/volatile offering for more potential rewards or you are happy with the regular gameplay offered by Victorious.

The regular game has been out for several years so we have focused our playtests completely on the new MAX version for this review, base gameplay feels very similar even with the MAX setting selected although we did struggle to get regular bonus triggers a little more than the original version, but since the bonus round can be triggered by a combination of scatters and wilds we didn’t encounter any prolonged periods of waiting for a bonus round.

A feature we always liked from the original was the ability to earn more free spins with more scatters or wilds, Victorious was one a few slots where a 5 scatter trigger wasn’t too rare to actually get given that wilds can assist with the triggering.

If you want a quick rundown of the changes to this machine make sure to check out the gameplay video below which walks you through all of the new features and options. 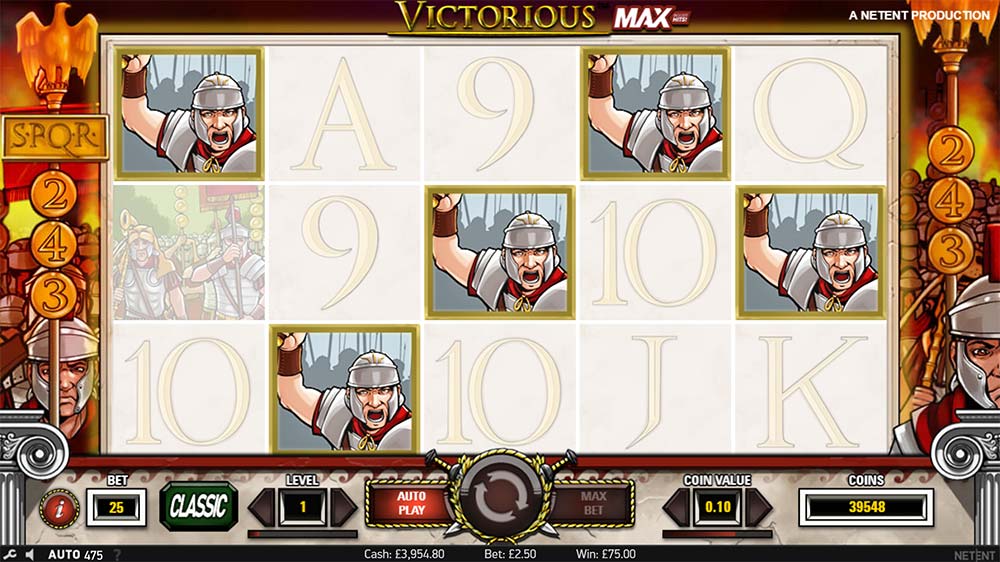 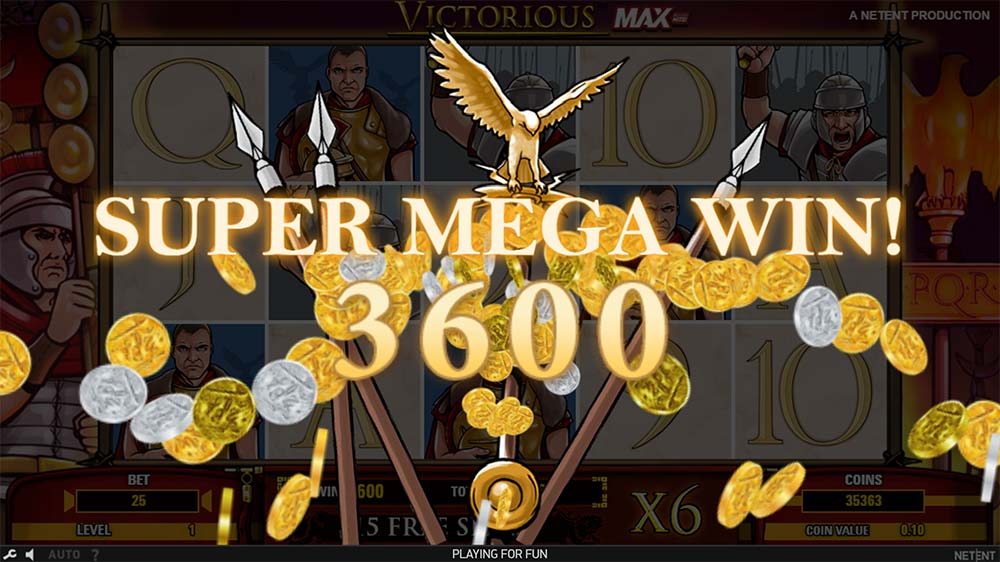 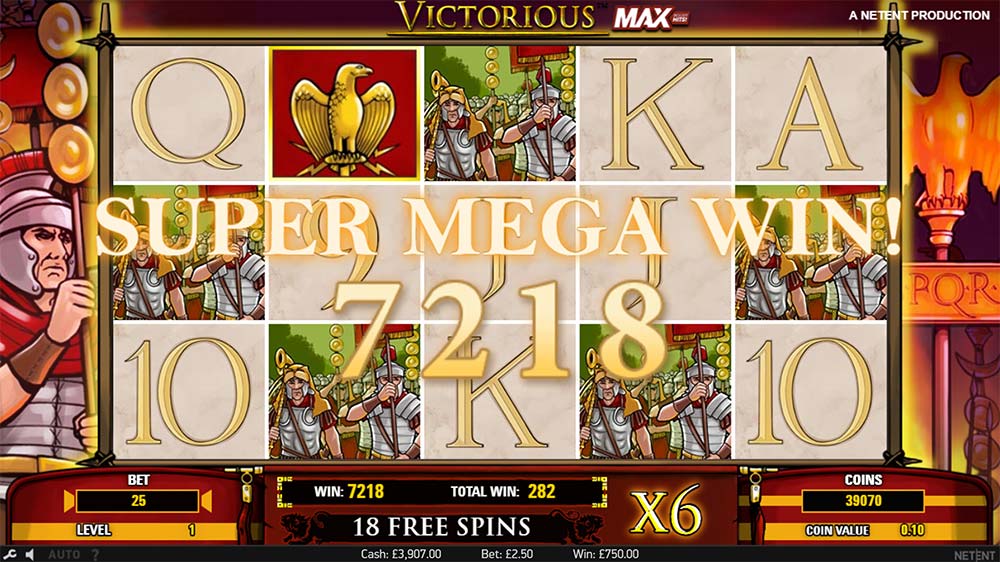 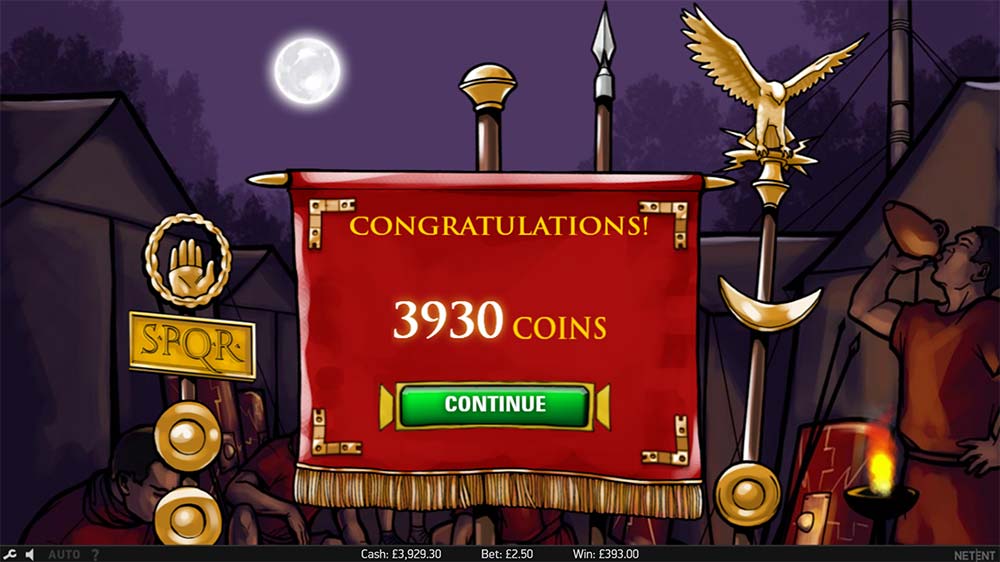 The Free Spins bonus round is triggered by landing 3 or more of the special scatter symbol starting from the left-most reel, additional scatters will increase the number of free spins initially awarded, there is also the possibility of re-triggering the free spins during the bonus round.

During the MAX free spins, a 6x Multiplier is awarded to any wins during the bonus, the regular version has a 3x Multiplier.

The Wild symbols are only present on reels 2 and 4 in both the base and bonus rounds but these do substitute for all symbols including scatters.

The Victorious Max Slot was a difficult slot to review as its a slot we have played many times in its regular form, so we knew what to expect before playtesting and it is a very solid 243-way machine in its default form, the MAX settings certainly inject a lot of volatility into this machine and given our personal preference for high variance slots we would most likely opt for the MAX setting, as the original version certainly feels like a medium variance slot compared to today’s releases.

In our playtests using the MAX version, we had bonus results in the range of 10x stake to around 300x stake with most bonuses generally being less than 50x.

As a standalone slot being released today, we would say it lacks exciting features in comparison to other providers releases, but if you are a fan of the original then the MAX version certainly injects plenty of good reasons to take it for a spin again.