We Have a Poke Around Voodoo Gold the Latest in the Gold Series Slots From ELK Studios!

Mr Green Casino has recently added the latest in the Gold Series of slots from ELK Studios titled Voodoo Gold, set in the swamps of Louisiana this dark-themed slot is packed with new innovative features which we have come to expect from ELK including the Bomb, Dual Bomb, Big Voodoo symbols, Voodoo Wilds and up to 262,144 ways to win!

Voodoo Gold initially starts as a regular 6×4 reel slot and has a pay any way format from left to right, scoring a win however will trigger an avalanche style effect with new symbols tumbling into place as well as adding a further new row of symbols and increasing the number of winning ways.

The growing reel set can enlarge up to a maximum of 8 rows which gives the huge 262,144 ways,  the bonus symbol also acts as a bomb and dual bomb which will help to clear out lots of symbols from the reels when no more winning pay are found.

The key feature though is the Big Voodoo Symbols which are enlarged blocks that can be anywhere in size from a 2×2 block up to 4×4, these symbols are easily identifiable by their green glow.

The key feature to these symbols is that and empty spaces below them will be filled with voodoo wilds, which can really help to generate successive wins, these “big” symbols only become active pay symbols once they reach the very bottom of the reels too.

The base gameplay is very capable of producing lots of successive wins thanks to the wilds being generated beneath these huge symbols, and to make things even more esciting these wilds will become sticky wilds during the main bonus round.

Check out the base gameplay and all of the bonus features in the video below! 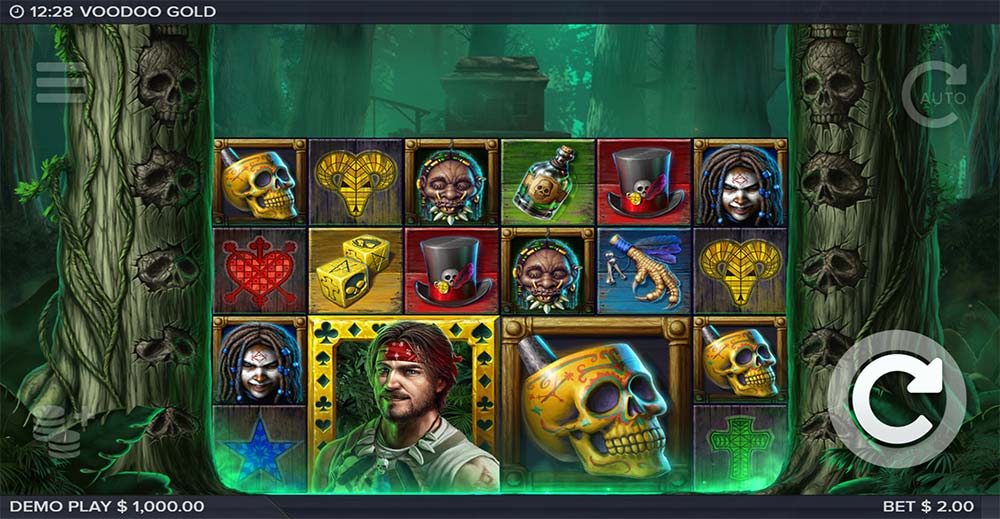 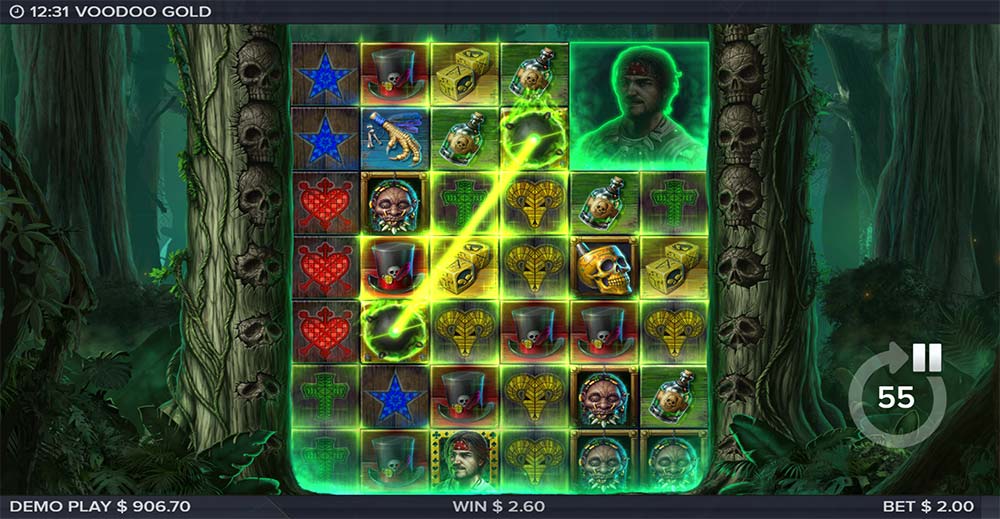 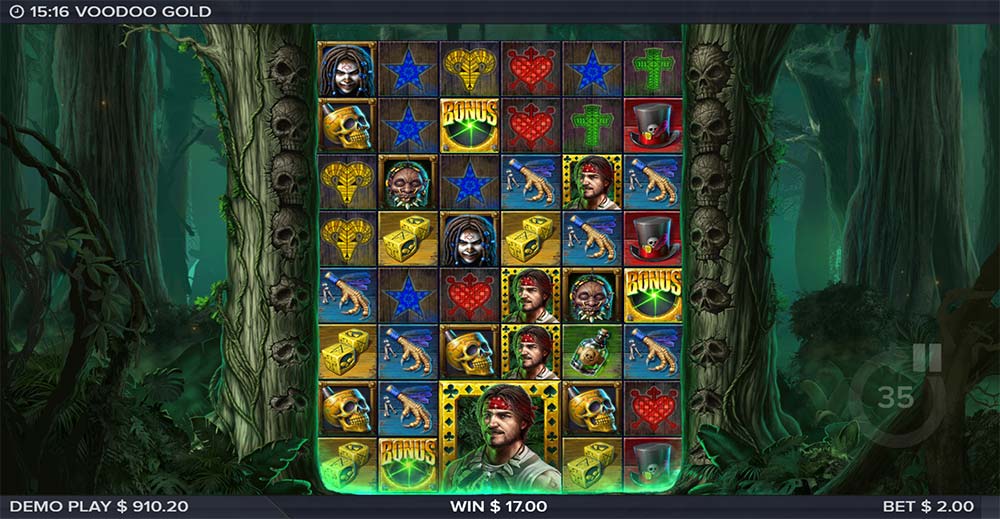 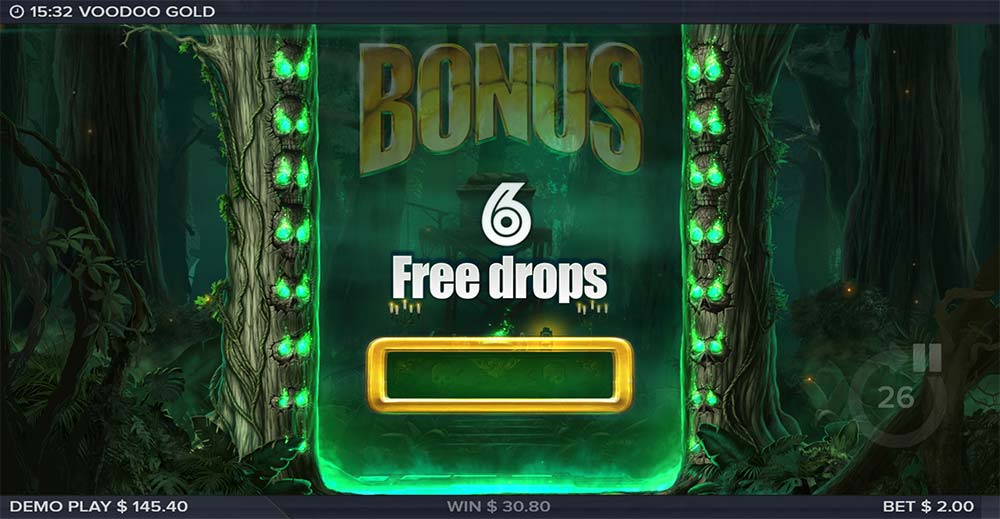 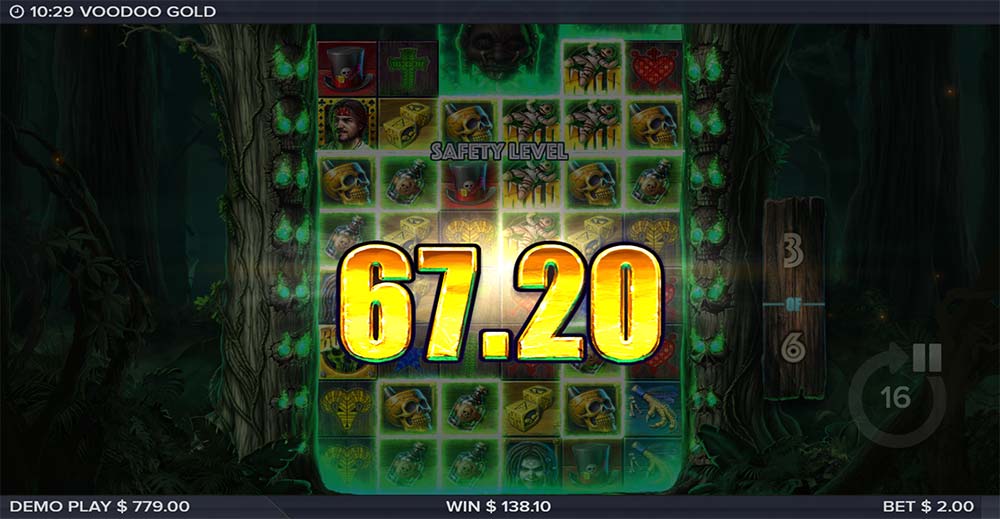 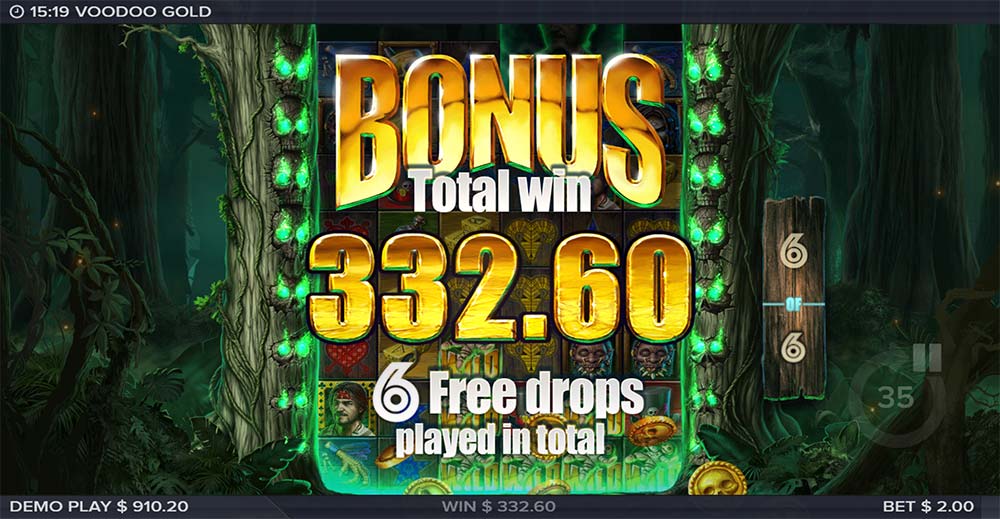 A single Bonus symbol will trigger the Bomb feature after no more wins from the avalanche are created, a  diamond-shaped area around the symbol will explode creating a new avalanche effect and possibly new wins.

The Dual Bomb feature is triggered when two bonus symbols appear on the reels, a green line is drawn to connect them together exploding all symbols types that the line passes through.

The main bonus round is triggered by 3 or more bonus scatter symbols and awards anywhere from 6 up to 15 free drops depending on the number of bonus symbols in view.

During the free drops there is a special safety level marker which moves upwards one row whenever a new win is created on the reels, this is basically like the avalanche feature of the base game but the reels will remain at a minimum of this level during the bonus round  and will extend up to the maximum8 rows giving you 262,144 ways to win.

The key to the bonus is the Big Voodoo symbols that place voodoo wilds in empty spaces, with the further twist that all non-winning wilds become sticky for the remainder of the bonus round!

Voodoo Gold is a really interesting slot release from ELK packed full of innovation, when sticky wilds are present in any slot it does tend to mean there is going to be plenty of potentials and we really enjoyed the way these were created from the big voodoo symbols.

Even with our extensive playtests we only just scratched the surface of the possibilities of this slot, it needs way more testing, but be very conscious that the bonus rouns is INCREDIBLY hard to trigger!, to the point where you might wonder if its ever going to happen, a quick look through the product sheet revealed there is a Bonus frequency of 1 in 614 spins making this an incredibly rare bonus to trigger in comparison with regular slots.

Voodoo Gold is definitely worth playing, but you will definitely need to be patient and bet accordingly to trigger those bonus rounds, the base game can produce some very nice wins too though!