Review and Where to Play the Yokozuna Clash Slot from Yggdrasil

We Get to Grips With Yggdrasil’s Latest Sumo Themed Online Slot Yokozuna Clash!

Videoslots Casino just added Yggdrasil’s latest Sumo themed online slot titled Yokozuna Clash to their casino. The scene for this slot is set in Tokyo were locals enter the Dohyo to do battle with 2 fighters that when grappling can produce special modifiers that include Wilds and Multipliers.

Using a 243-way pay in both directions payline structure the wins are regular and celebrated by a cheering crowd when they land, whilst the base game moves along quite nicely with sporadic mini-bonus features being applied to the reels the main Tournament Free Spins is where the action really heats up.

The main bonus round is triggered when the special scatter symbols land in view on the 1st and 5th reels, leading to the Tournament Free Spins mode where a fighter is selected to do battle with more powerful fighters.

The intro to the bonus round is reminiscent in style to the classic arcade game Streetfighter, the fighting, however, is definitely still Sumo themed where winning combinations from either side will push the other fighter closer to the edge of the Dohyo, if you manage to beat the 1st opponent you are rewarded with a championship fight were defeating this opponent results in a 2x win applied to your current win total.

The amount of free spins is infinite, the free spins will keep coming as long as both fighters remain inside the ring and will only end when your fighter is pushed out of the ring or you defeat the final boss, thankfully this is easily tracked with a Battle Bar indicator that shows the fighters current positions.

One special feature that can really help to boost wins is the Sumo Clash Feature which is triggered when a 5 of a kind win is formed on the reels, this will add anywhere from 2-4 additional matching symbols to the reels and hence creating, even more, winning combinations. 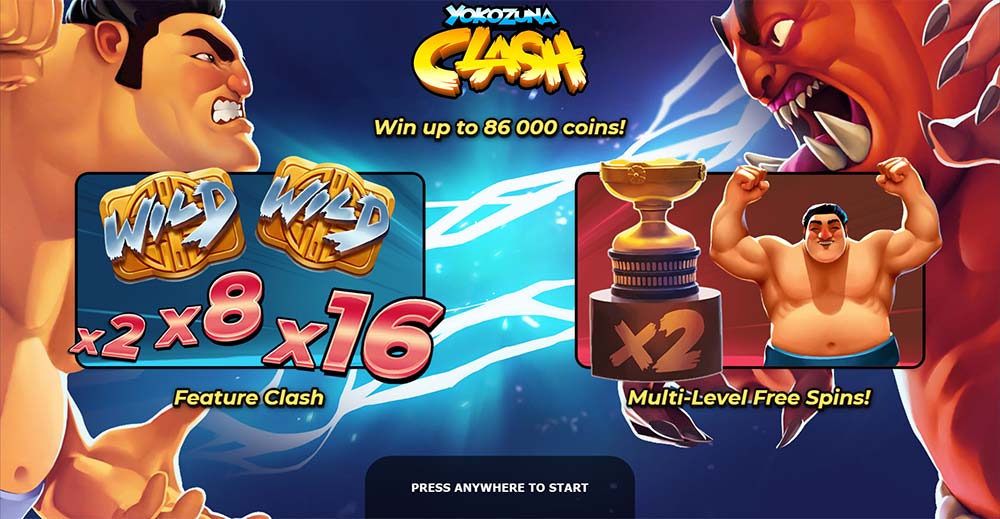 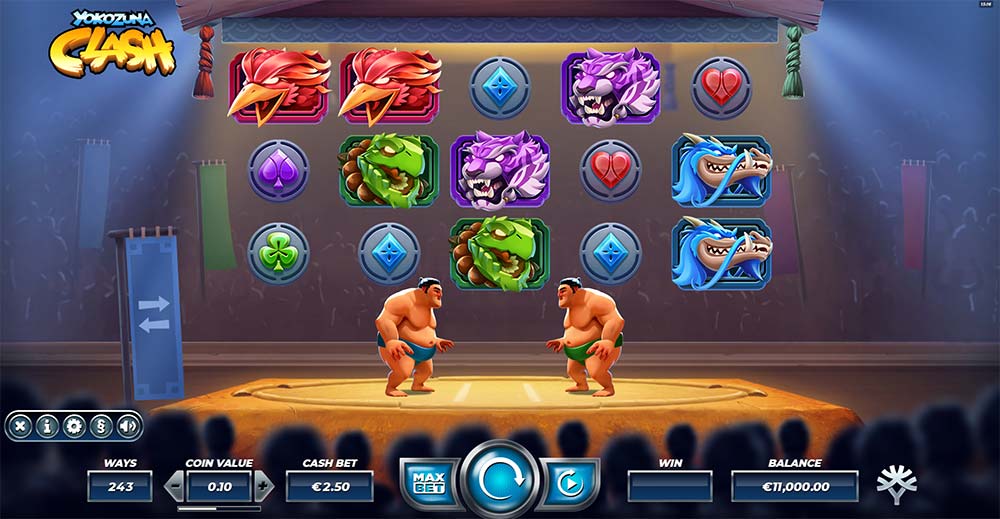 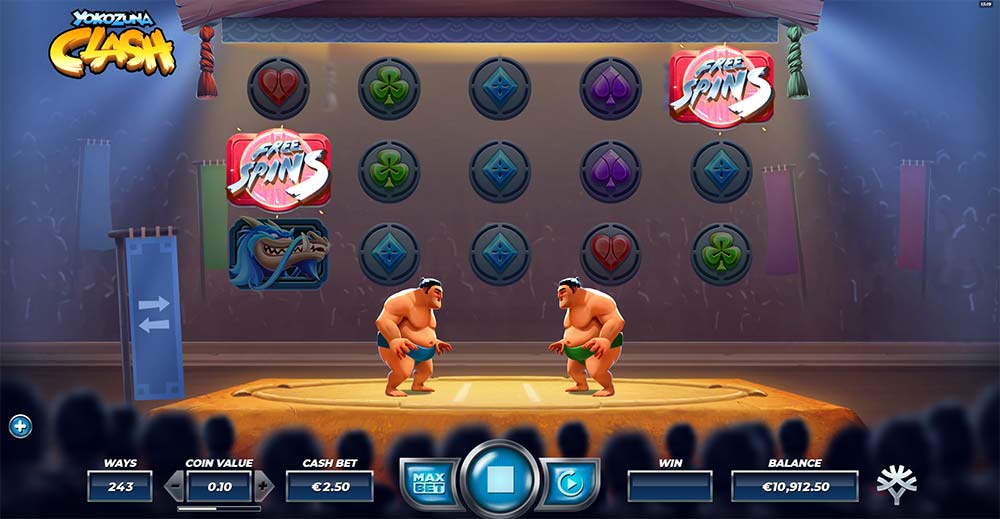 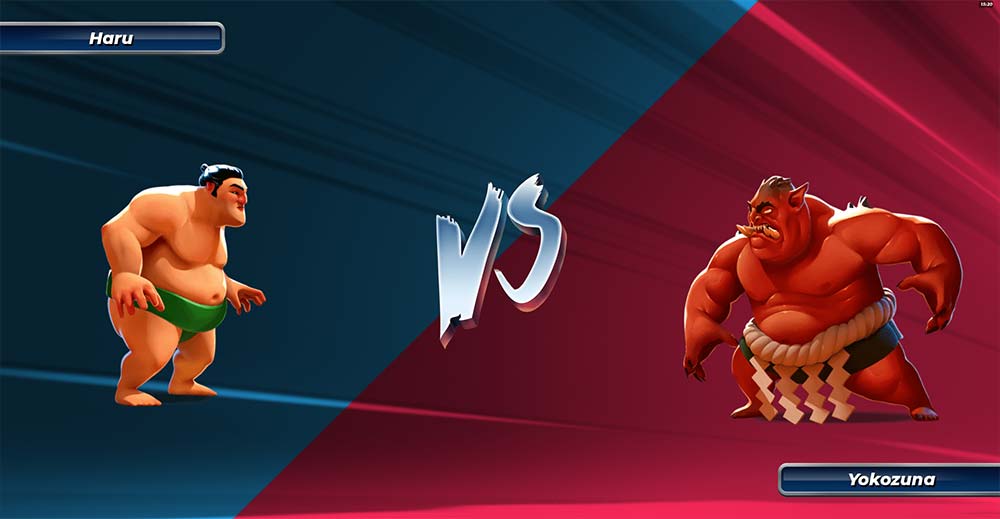 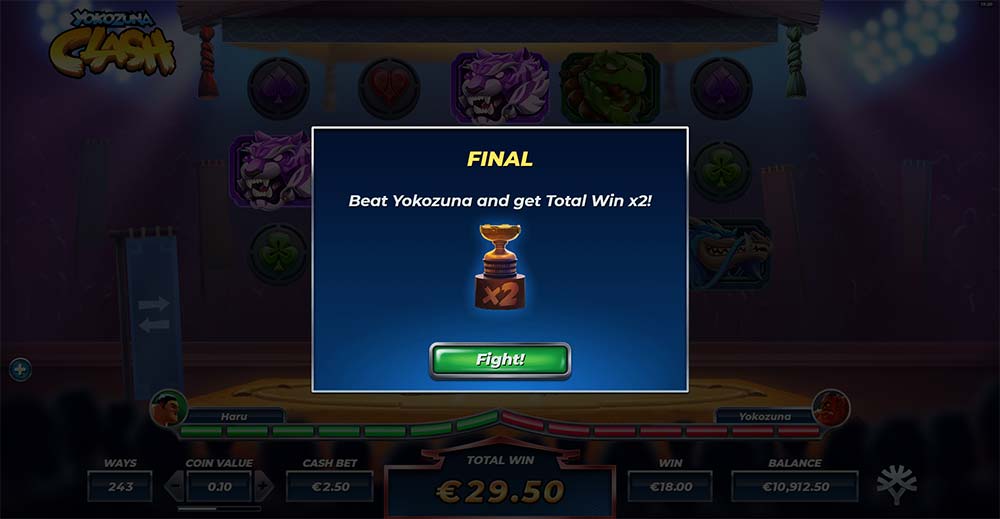 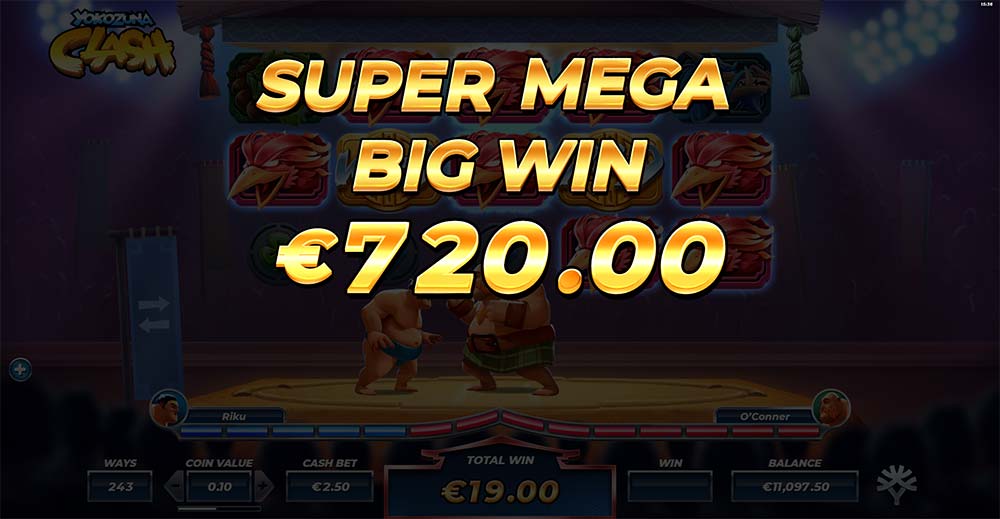 Apart from the Sumo Clash feature which we have already outlined, the main tournament free spins is really were all the action is, once triggered the initial starting fighters are selected and these can have slightly different abilities with wilds or multipliers as their special features, your opponents also have special abilities and their pushback range for scoring wins is slightly greater too. You can check out their full abilities below. 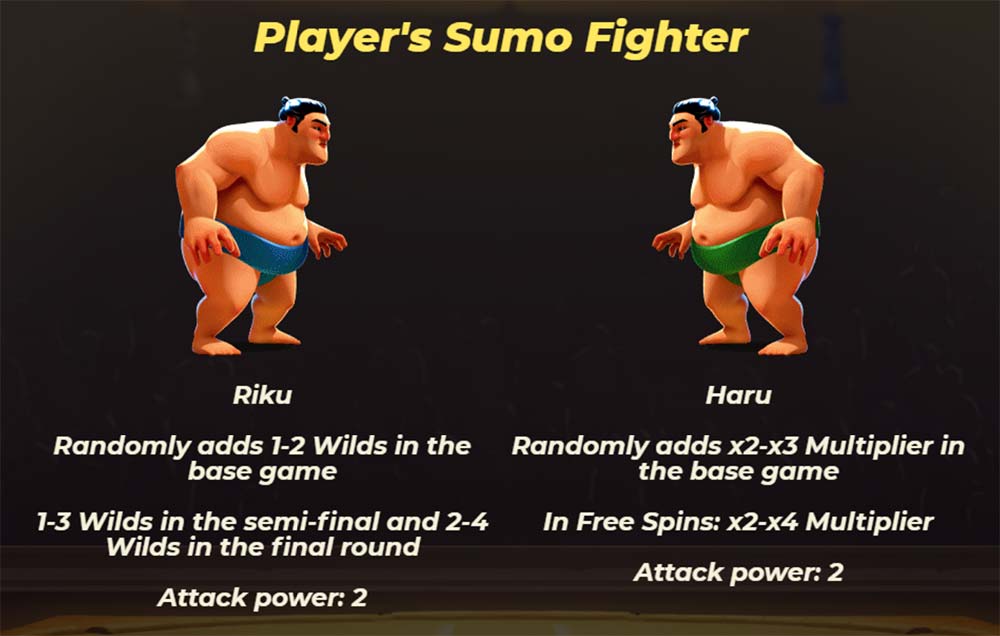 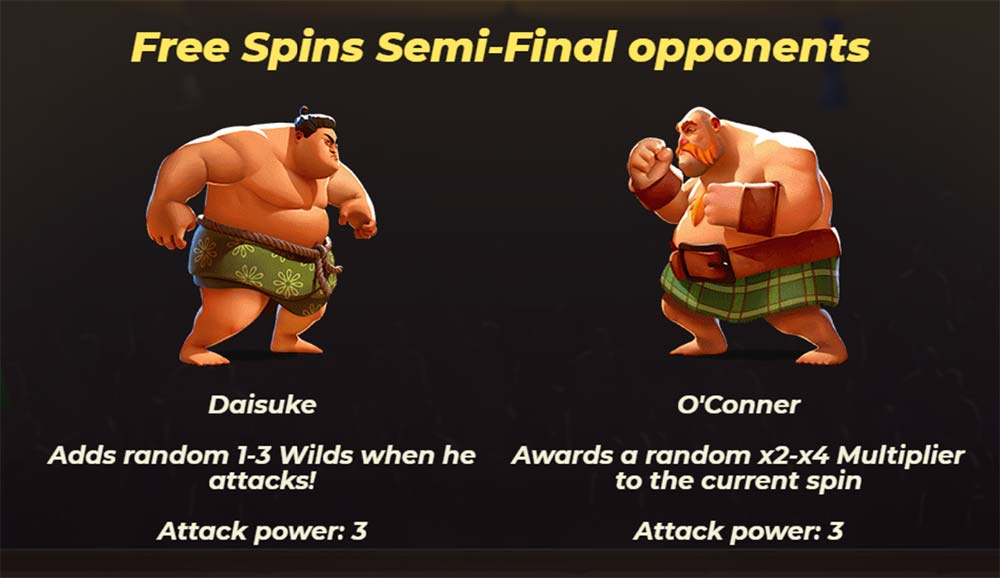 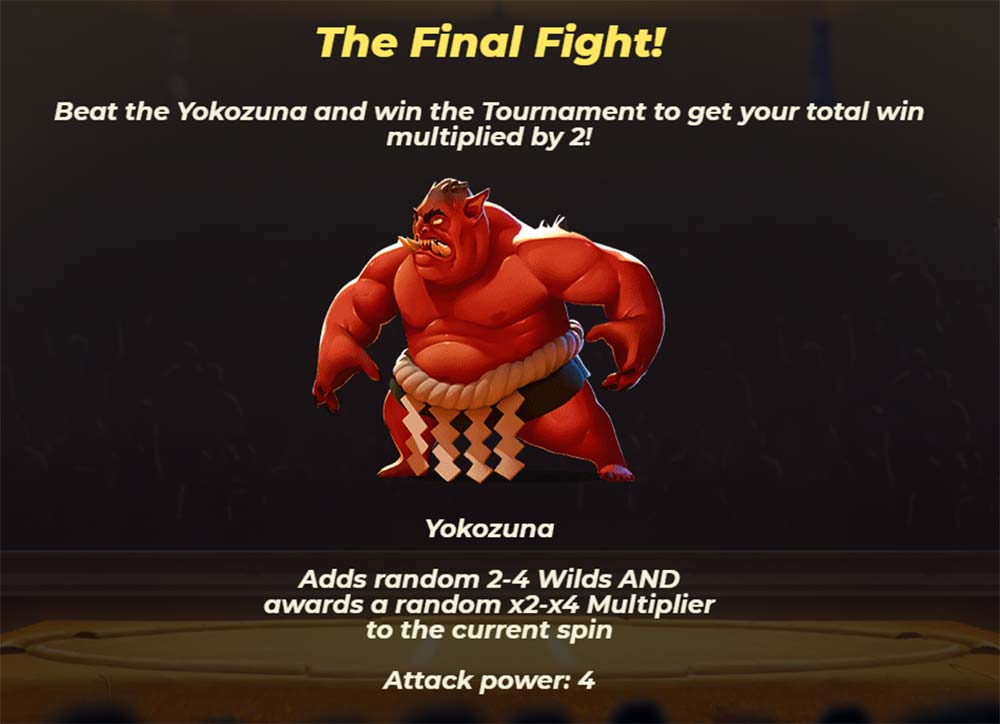 Yokozuna Clash is another very polished slot release from Yggdrasil Gaming, the graphics and animations are all top-notch, the gameplay however we did find a little underwhelming, the clash feature is very exciting when it happens especially if multipliers are involved and can certainly result in some very impressive wins as shown in the screenshots earlier.

We really would have liked them to expand more on the individual Sumo wrestlers abilities to make them more unique and varied, there were hints of streetfighter inspiration but we felt there was a definite lack of uniqueness in each of the fighters special abilities, they really could have gone to town with exciting modifiers and combos between both fighters to make the bonus round an epic experience, instead you tend to be simply watching for lower-paying 3 of a kind wins and hoping for you fighter to progress through the tournament.

Whilst the gameplay, graphics and win potential are perfectly fine, this slot certainly could have been made more exciting with a more varied set of special abilities and interactions between the fighters.