Join the Masquerade Ball in the New Harlequin Carnival Slot From NoLimit City!

Rizk Casino will be adding the latest NoLimit City slot Harlequin Carnival to their casino when it is officially released on the 7th April 2020, this masquerade ball themed slot has lots of nice hidden features including Nudging Wild Reel Multipliers, Re-Spins and Re-Triggers during the Free Spin bonus round.

The base game is a colourful 5×3 reel layout with 20 fixed paylines, with a good mixture of high and low paying symbols along with a nice dose of variance mainly thanks to some insane multiplier potential.

For countries where this is still allowed there is also a bonus buy option allowing you to skip the base game and instantly trigger the main bonus round, but thanks to the nudging wild reels and Harlequin Respin feature there is plenty of potential and varied ways to trigger the bonus round from the base game too.

The Wild symbols once full fully nudged and expanded onto the reels will then act as walking wild reels and move to left on each respin gaining further multiplier values each time they move, further wild reels can also land to extend this feature,  the bonus scatters can also be collected while this feature is active and the respins are in play.

This novel feature allows you to trigger the bonus round instantly with 3 scatters in a regular fashion or by collecting them during the re-spins adding another level of excitement to the base gameplay.

The bonus round is where things really do heat up though with the Harlequin Bonus Spins awarding a 3x Multiplier Wild Reel on the 5th reel, by the time this reaches the first reel it will be a 7x multiplier, of course further wild reels can also land and these multiplier values are added together giving some huge potential when multiple wild reels are in play during a re-spin. 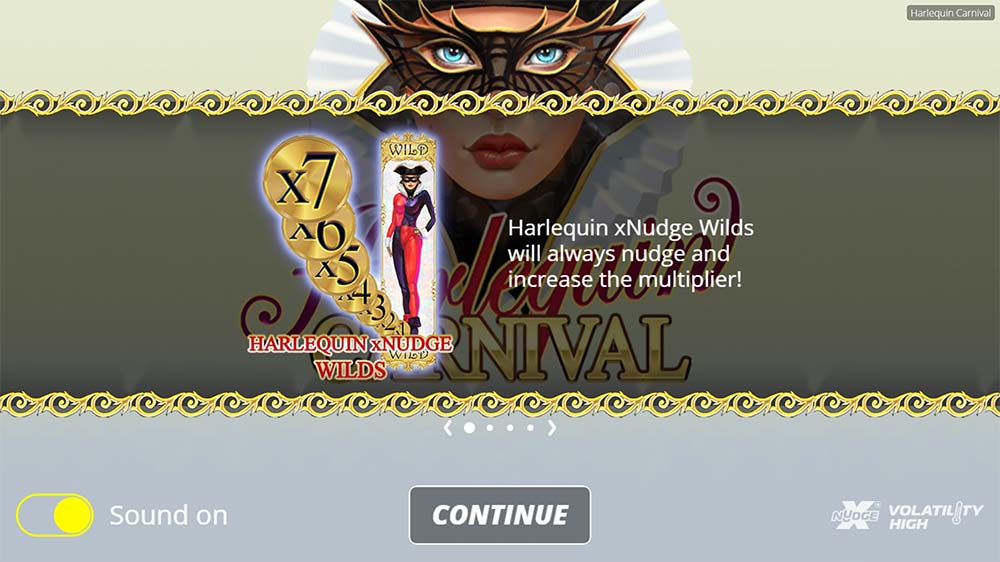 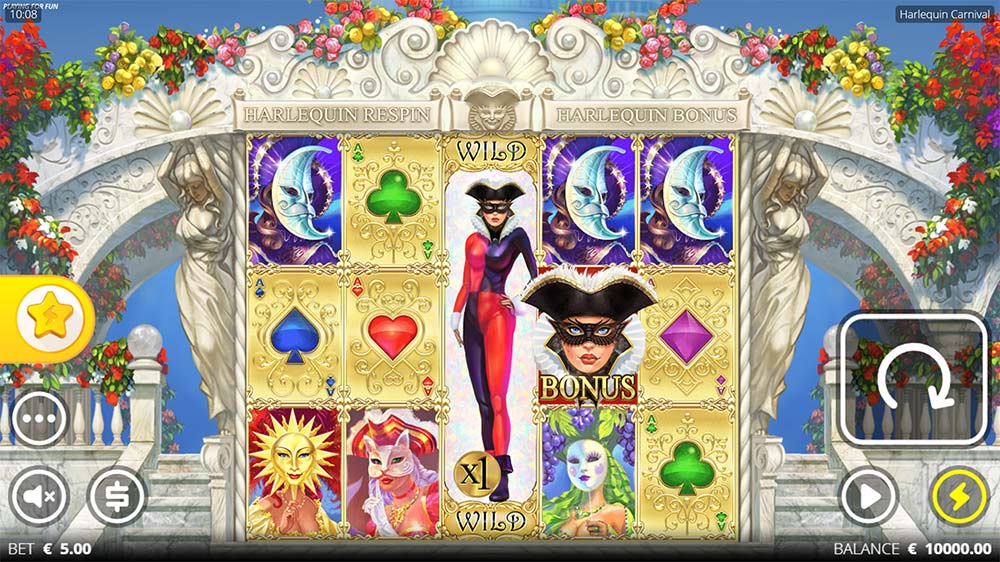 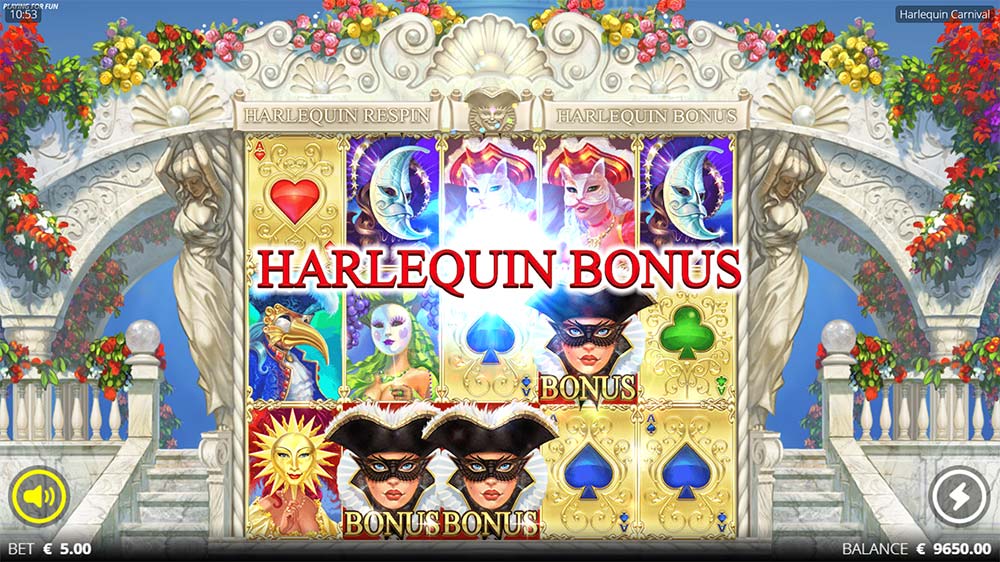 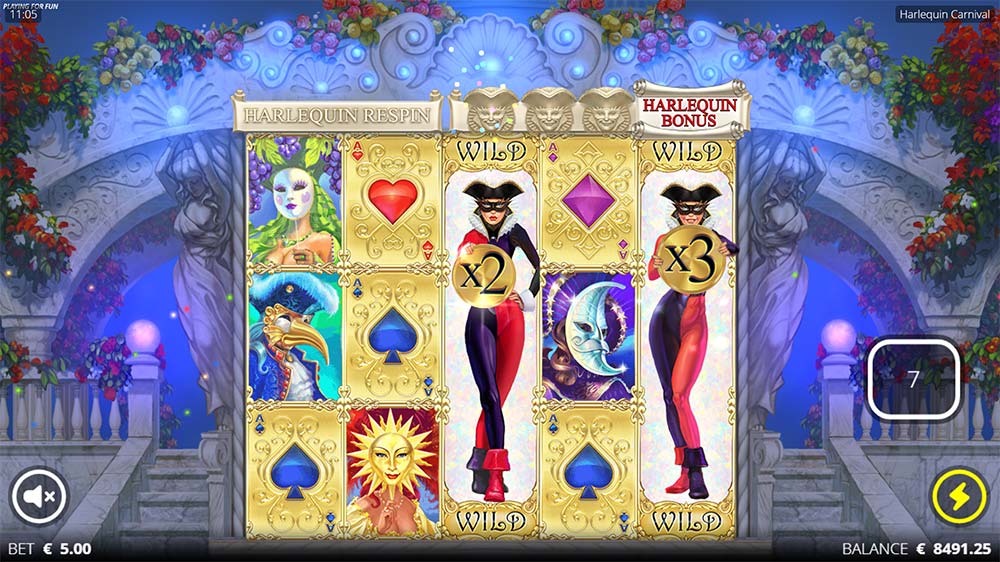 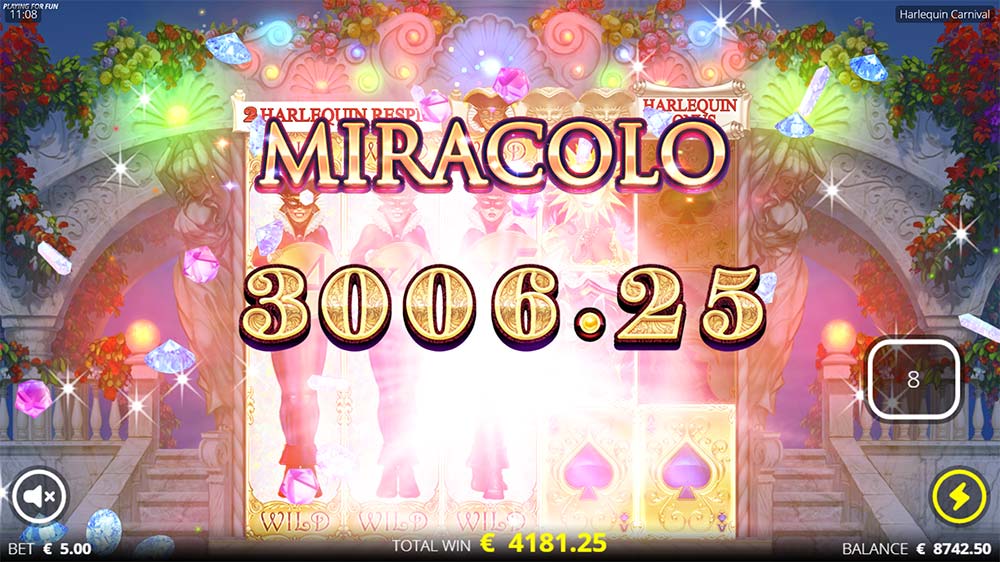 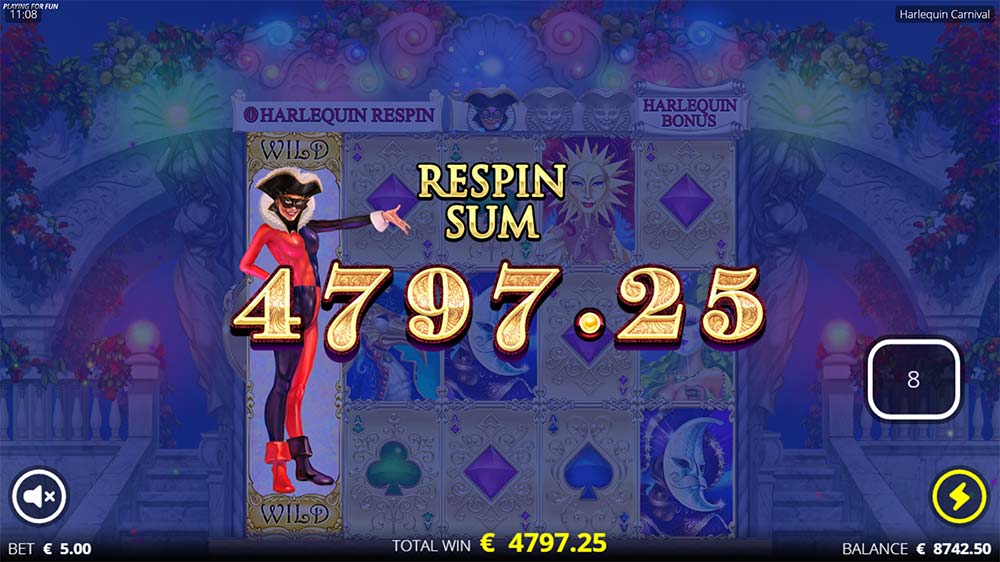 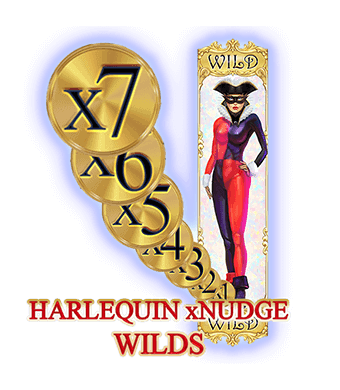 A 3-row high Wild symbol exists on reel 2, 3 and 4 and will always nudge to fully visible when it lands partially in view, each nudge increases the Wild multiplier by 1. 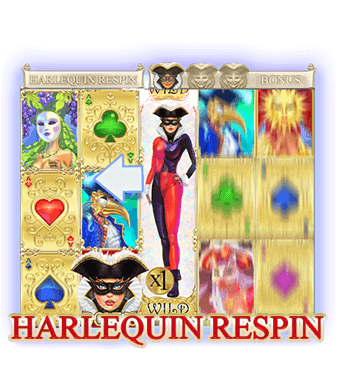 In the Harlequin Bonus, the multiplier will also increase by 1x for each step it takes to the left.

To trigger the main bonus round you need to collect 3 of the Bonus symbols during Harlequin Respins to award 8 Harlequin Bonus spins. 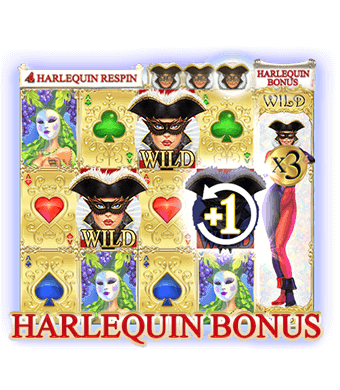 The main bonus is triggered when 3 Bonus symbols are collected awarding 8 Harlequin Bonus Free spins. The Scatter symbols can be collected during the Harlequin Respins or in a regular single spin in the base game

The Bonus starts with a guaranteed Harlequin Nudge Wild on the 5th reel with a 3x multiplier, increasing to the maximum 7x multiplier as it walks across the reels during the respins.

The Scatters act as wilds during the bonus round also and add _1 extra spins, collecting 3 in total will award another Harlequin Nudge Wild on the 5th reel!

The Harlequin Carnival slot from Nolimit City is another impressive high variance release, we playtested this slot almost exclusively using the bonus buy option simply because the most excitement and potential is contained there.

Be aware this is a super high variance slot and a result you can expect some very disappointing bonuses, but with just 2 or 3 of the walking wilds active on the reels can produce wins well in excess of 1000x stake, our best bonus round was over 1500x stake with 3 wild reels active.

For fans of their previous releases like the Barbarian Fury slot will definitely find this release appealing, its more of the same nudging wilds mechanics but with a few different features at play with walking wilds.