Energy Casino will soon be adding Reg Tiger Gaming latest slot Robin Hood’s Wild Forest to their casino which is a cartoon-themed take on the Robin Hood story.

There has been a plethora of Robin Hood themed slots over the last few months with the Sheriff of Nottingham (iSoftbet) and the Riches of Robin (Play’n GO) being released.

This time from Red Tiger Gaming we have another cartoon stylised machine which focuses on the special abilities of Robin, Maid Marian and Little John to provide some interesting features to the gameplay. With just 10 paylines and a low variance rating but frequent hit rate you shouldn’t be looking for huge wins on this machine but more constant steady action.

When appearing together these 3 special bonus symbols can provide Sticky High Paying symbols with Respins, added wild symbols and a low paying symbol removal feature to the reel set, thankfully when multiple special symbols land in view these abilities trigger one after the other to create some interesting combinations.

The lack of a main bonus triggerable feature does, however, detract from the long term enjoyment of this slot, the base gameplay is very simple and easy to understand, but with such few paylines combined with a low variance slot doesn’t seem that engaging for us to really recommend it.

As a wagering slot however this may make a suitable candidate, with regular mini-features occurring and the possibility of some fairly decent hits when all 3 of the powers combine together, but honestly, for us, we spent several hours testing this slot in order to seem a win just over 100x stake!

Check out some of the features of this slot in the media section below. 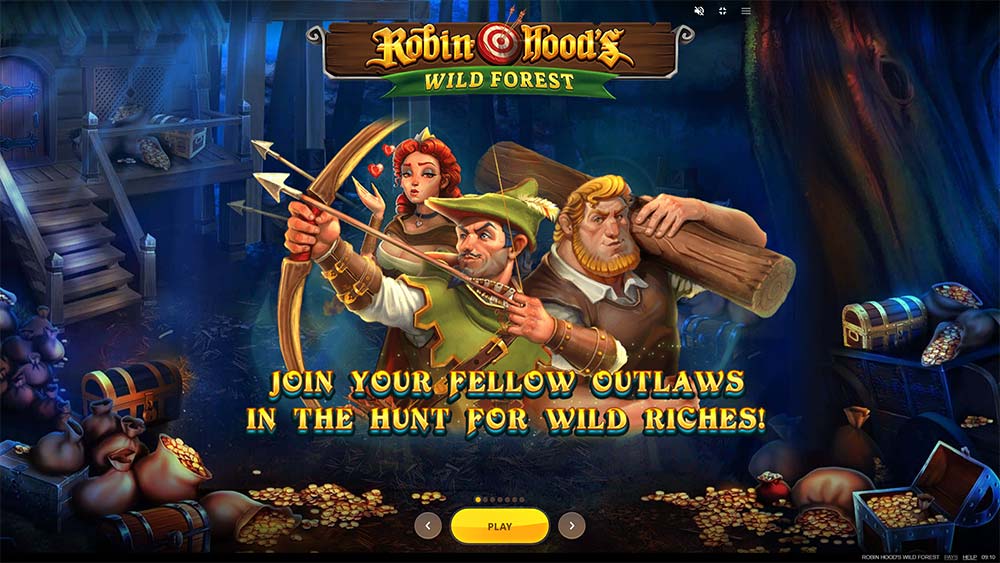 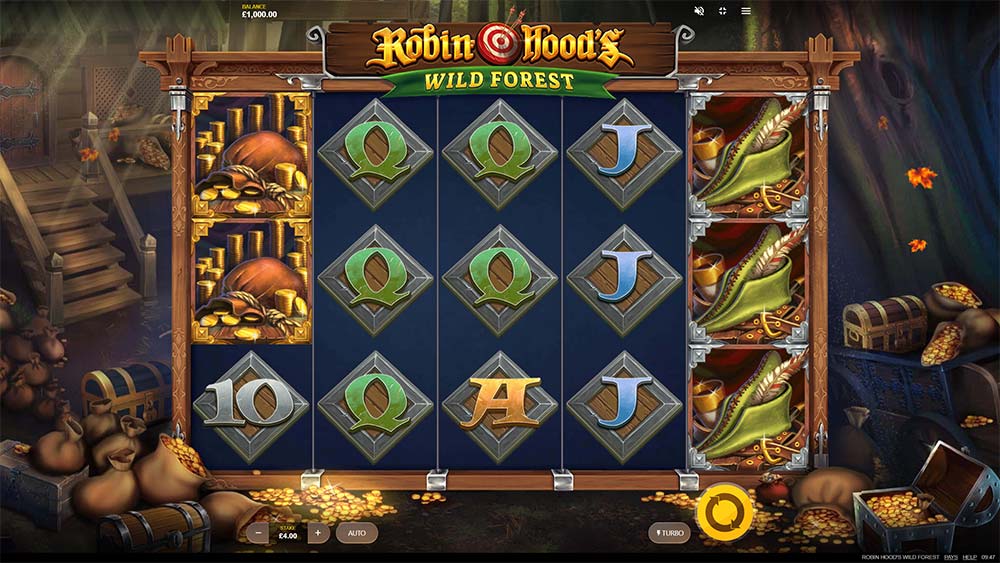 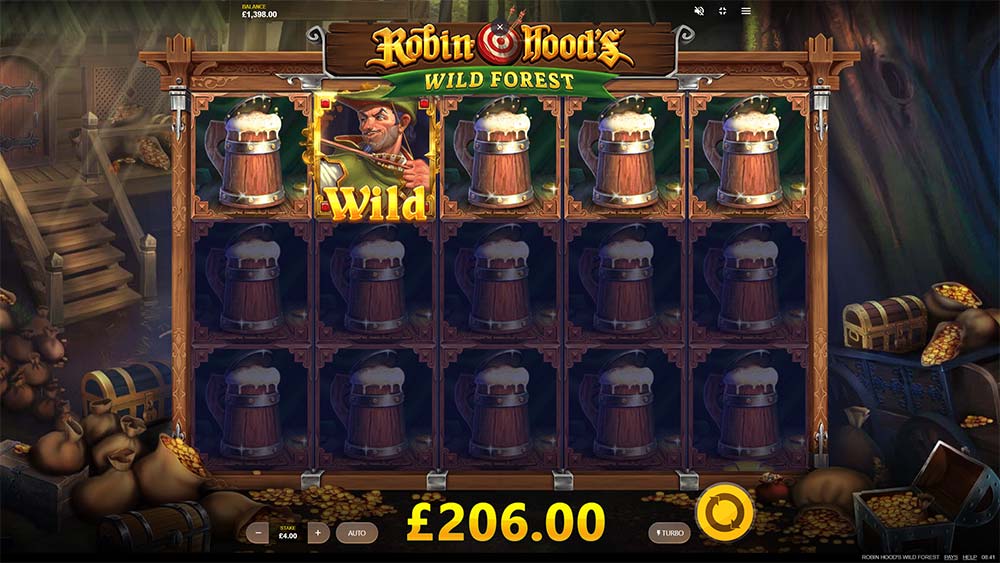 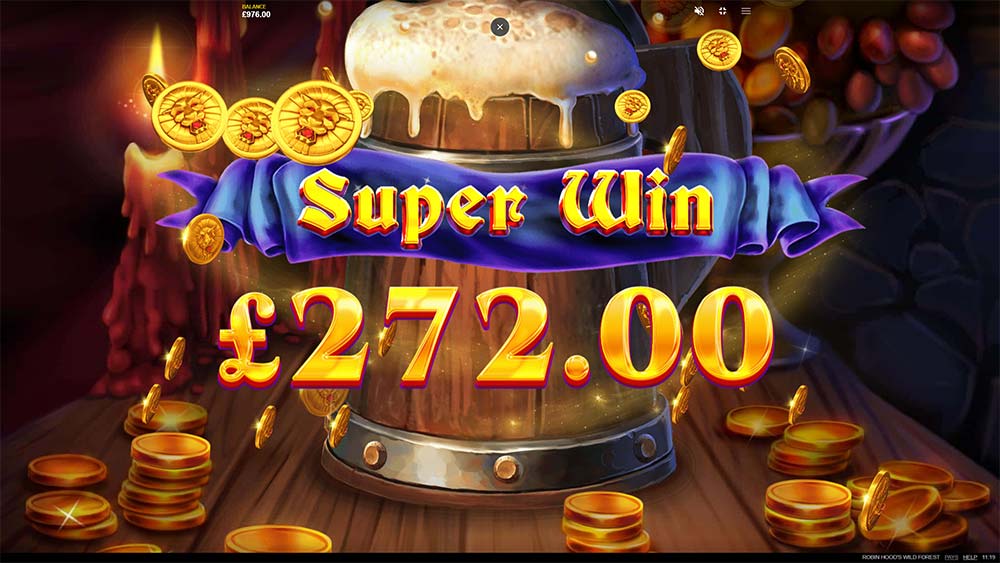 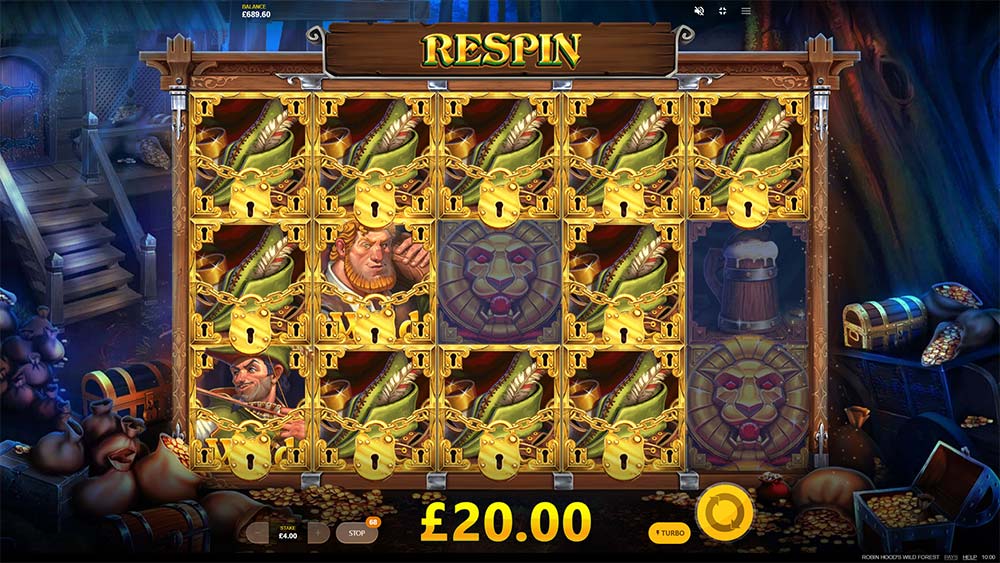 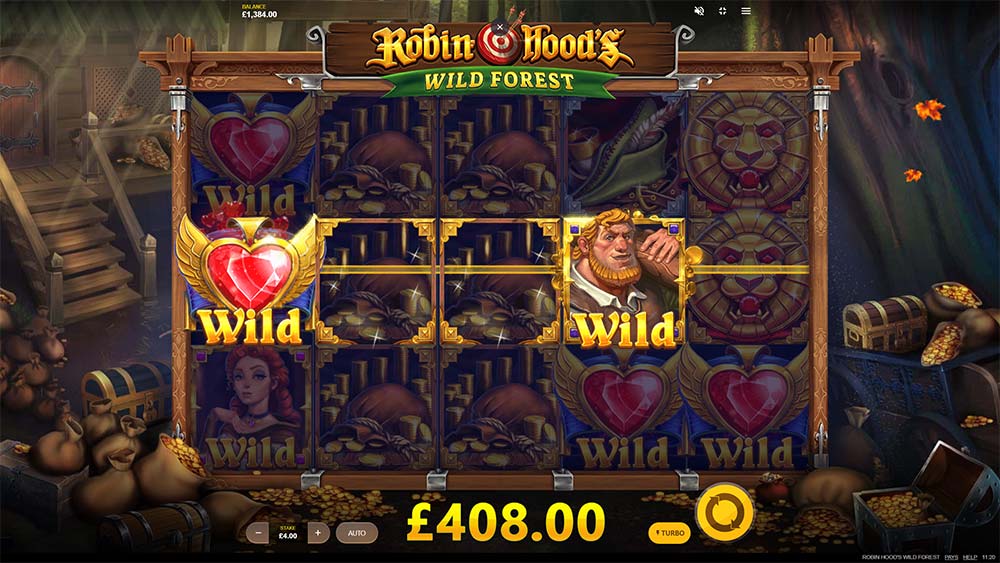 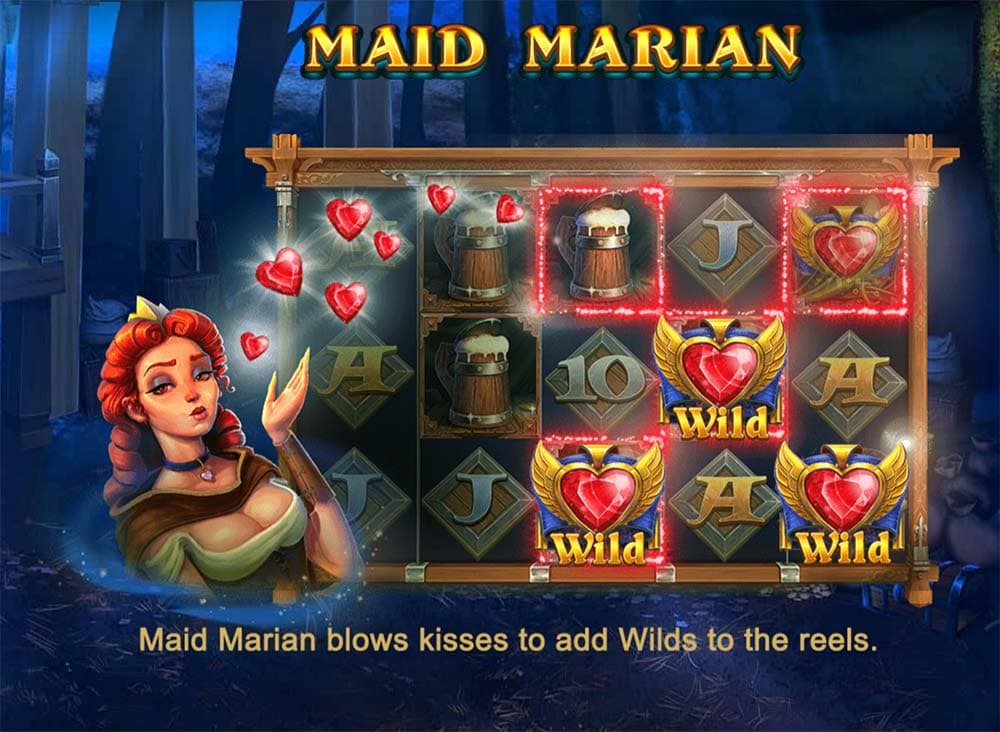 When the special Maid Marian symbol lands on the reels she blows kisses to add random WILDS on the reels. This feature may also randomly activate a further time to add even more wilds onto the reels. 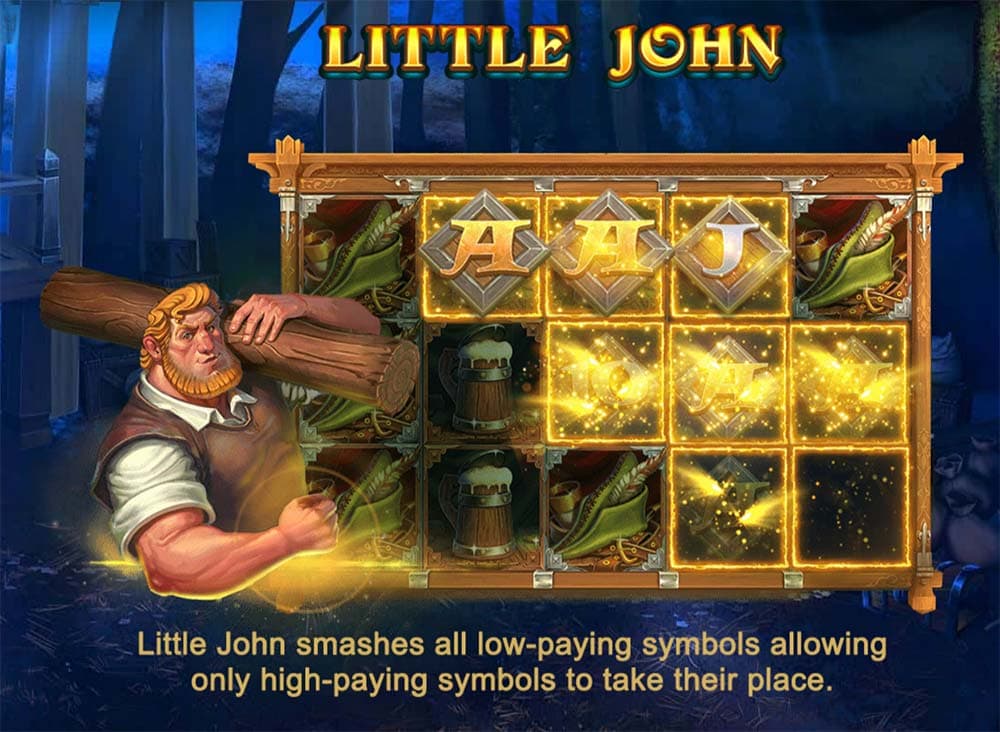 When the special Little John symbol lands on the reels he will smash the ground and destroy all of the low-paying symbols on the reels allowing only high-paying symbols to land. This feature may also re-occur and remove any symbols which arent forming part of a payline win. 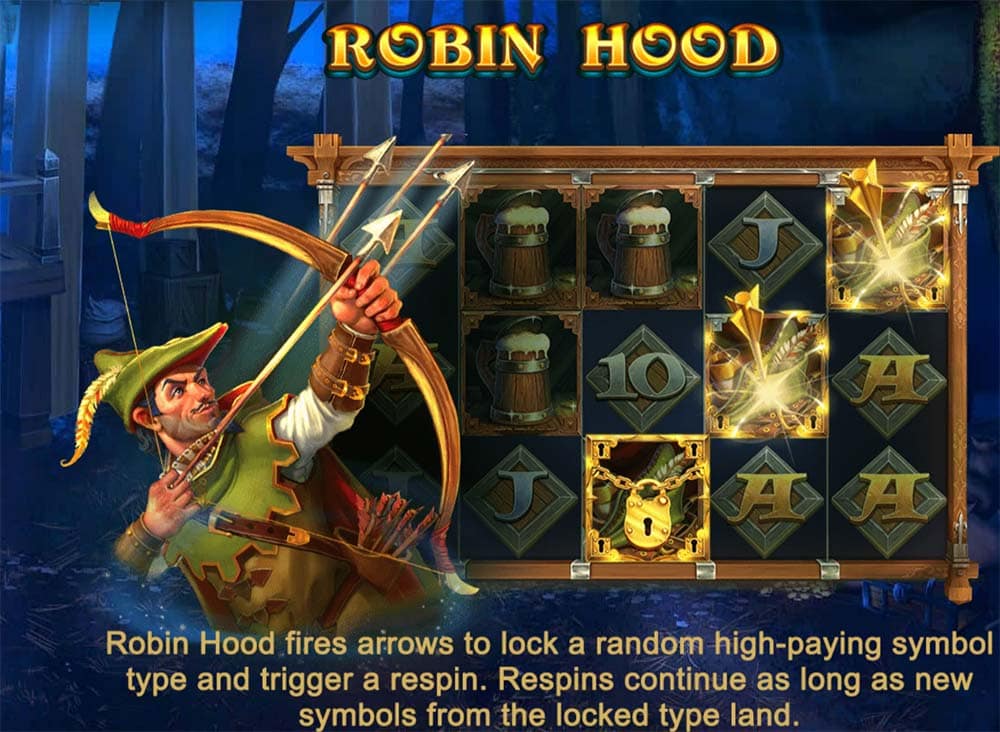 When the special Robin Hood symbol lands he fires arrows at a random high-paying symbol on the reels, locking them in place and triggering a respin of the reels. this can also include Wilds that have been triggered by the Maid Marian feature.

The re-spin feature continues as long as new symbols of the same locked type land.

The Robin Hood’s Wild Forest Slot from Red Tiger Gaming is a visually superb slot release, the graphics and animations are top-notch, the gameplay, however, is distinctly lacking, in a time where players are gravitating towards high variance slots this slot misses the mark.

The base gameplay can be interesting with some interactions of the 3 main features but we really struggled in our playtests to get many wins over 50x and the fabled 100x mark, for that reason it’s going to be a slot that will not appeal to many current players once they have grasped that this is firmly a low variance slot, possibly good for wagering but not much more!