Review and Where to Play The Great Wall Slot from iSoftBet

Rizk Casino has recently added the latest slot from iSoftbet which is themed around one of the seven wonders of the world The Great Wall, using a regular 5×3 reels and 20 paylines, with a graphically impressive backdrop of the great wall of China moving along as you spin the reels.

The look and feel of this slot is a classic oriental style, you could easily sit this machine alongside the classic Aristocrat slots in a casino and you’d be hard-pressed to spot the differences in quality.

Apart from the stacked symbols and wilds found on the regular reels, the main focus to this slot is the special instant prize awards that are displayed above the reels along the Great Wall.

In the base game, these are staked based cash rewards that can occasionally go to very high values (generally 5x to 50x though), along with a special free spins symbol that triggers the bonus round, with every spin these prizes shift along out of view with a new prize being added.

These prizes are only awarded when the special Emperor symbol lands in view under any of the reels, and this feature is signalled by an unmistakable rumbling of the entire reels with glowing sparks being emitted from the reels. Multiple prizes can be one in a single spin from this feature and of course its much more prevalent during the free spins bonus round.

Whilst the heavy focus does tend to be towards these cash-based rewards, there are some decent wins to be had from regular gameplay also. 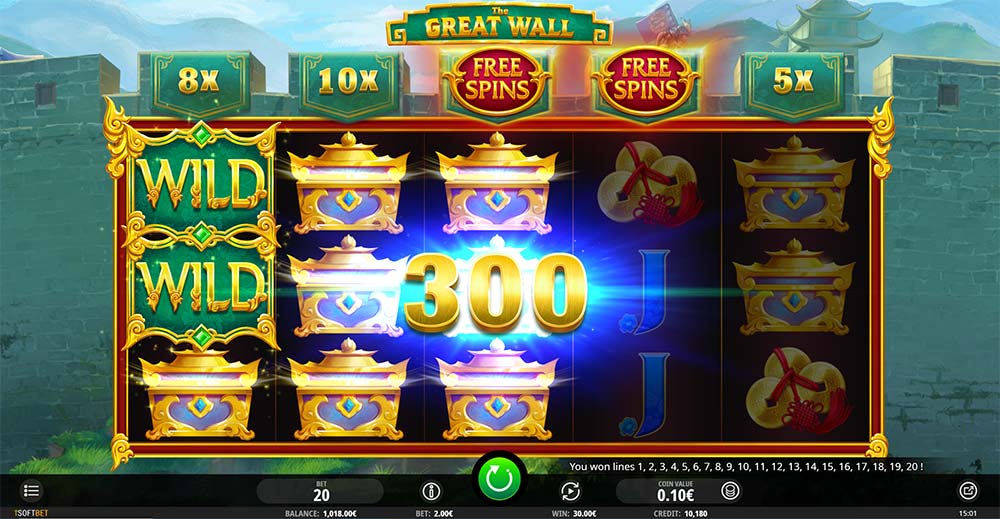 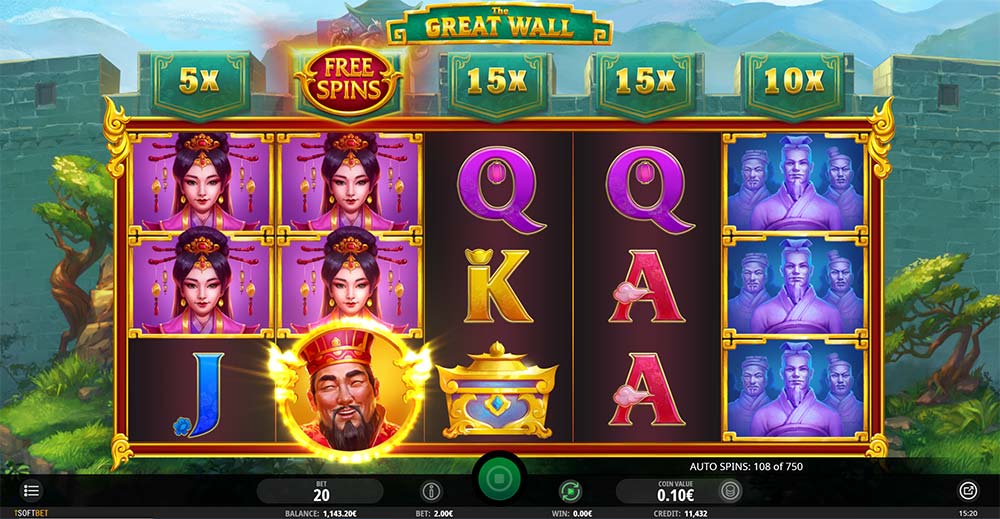 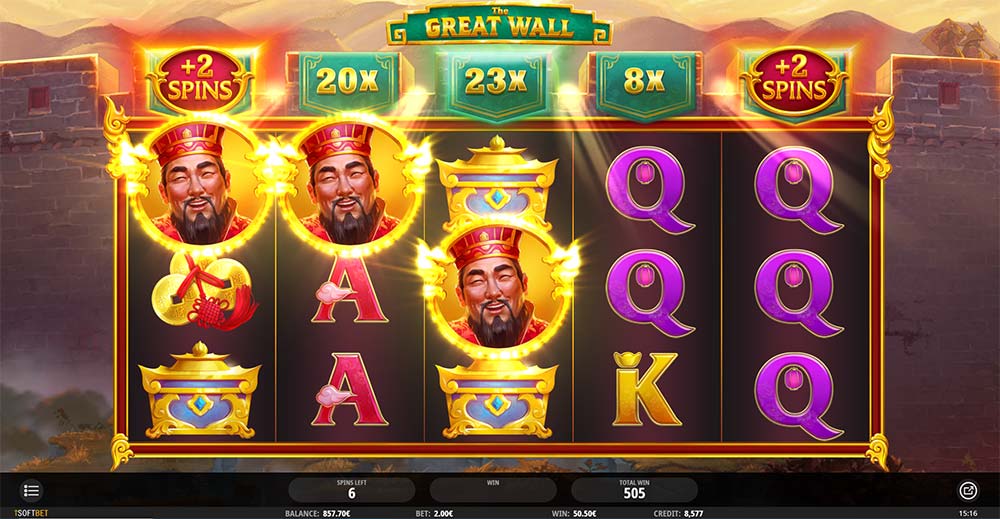 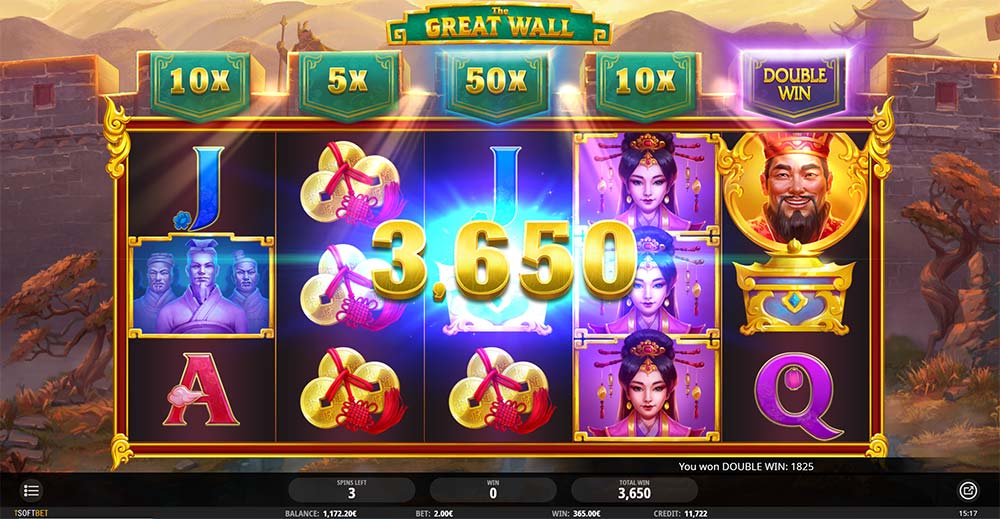 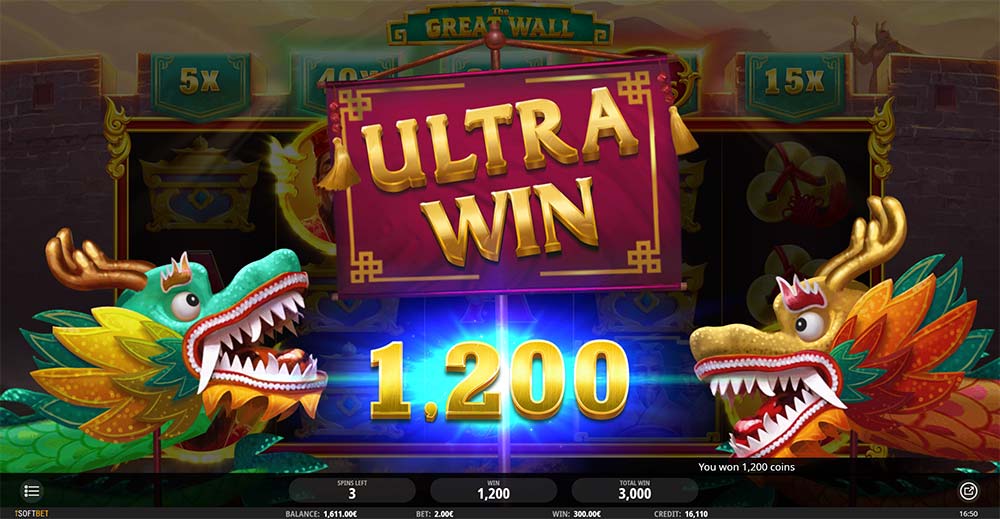 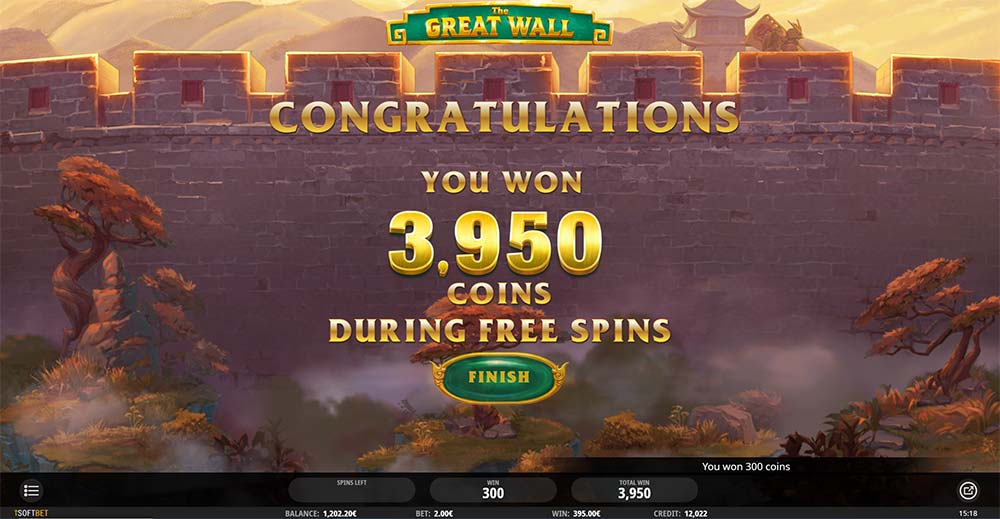 The stake based random awards are collected when the special Emperor symbol lands in view beneath them, the can range from 5x stake up to much higher values.

The main bonus feature is triggered when the special Emperor symbol lands in view on a reel beneath the Free Spins symbol on the Great Wall, awarding 10 free spins.

During the bonus round the Emperor feature is much more common, along with the regular cash-based prizes you can also collect extra free spins and a special Double symbol which doubles your current win from the bonus round including regular wins.

The Great Wall slot from iSoftbet is a reasonable medium variance slot release, graphically this release is superb, particularly the rumbling animations when the Emperor feature is about to happen, so kudos to the iSoftBet team for their last few slot releases as there is a big improvement in terms of graphics.

There are some big potential wins on this slot from bigger stake based rewards but during our playtests the highest we saw above the reels was 50x stake along with the Double Feature during the bonus round.

Bonus round end results were generally in the 20x stake to over 200x stake areas with 3 Emperor symbols landing in view at the same time being the most we saw from this feature.

The biggest drawback to slots of this style with frequent cash rewards is that the normal slot gameplay almost becomes a forgotten part of the game, and we experienced this somewhat during our playtesting, it really was a case of waiting for the Emperor feature activating to provide the real excitement, we did have a few nice regular wins but the regular gameplay is overshadowed greatly by the cash rewards.

Overall though it’s worth a play if you are looking for a graphically impressive oriental-themed medium variance slot to try out.