We Join the Hunt in the Latest Online Slot From Play’n GO, Coywolf Cash!

Unibet Casino has just added the the latest Play’n GO slot release titled Coywolf Cash to their casino, which is unusual  in the sense that it is a 5×3 reel but with 50 active paylines!

On inspecting through the paytable you will probably notice that that pays from premium symbols are quite low, this is countered somewhat by the 50 paylines, but more so from the abundance of Wild Reels and even Multiplier Wild Reels which are present on this slot.

Play’n GO is pitching this release as a very highly volatile slot, and in some respects, this is certainly true however given the paytable the biggest hits on this machine will have to include not only several wilds reels but also the highest 7x multiplier reel to really reach the big win levels. With 2 different types of wild symbols its worth looking through the paytable to notice the colour differences of the standard Coywolf and Alpha Coywolf symbols!

There is an unusual feature which can activate in both the base game and free spins rounds which are triggered by landing a special Mask scatter symbol on the middle reel, a new reel appears then spins above the main reel set and can add several Alpha Wild Coywolf reels, in the bonus round you can also earn extra free spins along with multiplier wild reels up to 7x!

The main bonus feature is triggered by landing 3 or more scatters with extra scatters adding to the starting free spins total, and extra spins from the Mask Scatter feature.

The maximum number of wild reels that can be added during the bonus is 4 wilds reels and a Mask Scatter symbol, with a claimed maximum win of around 4000x stake!

You can check out the gameplay video for Coywolf cash below! 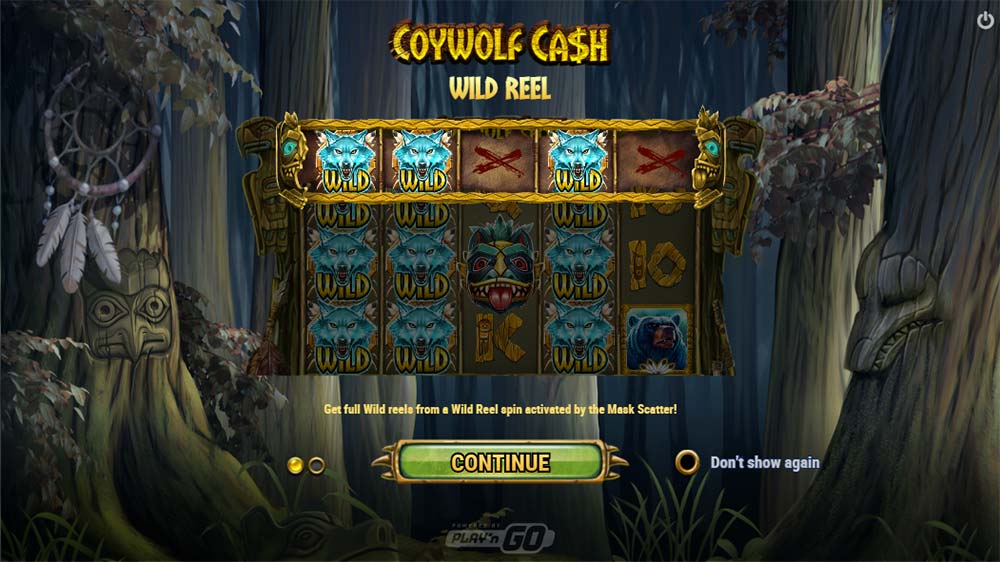 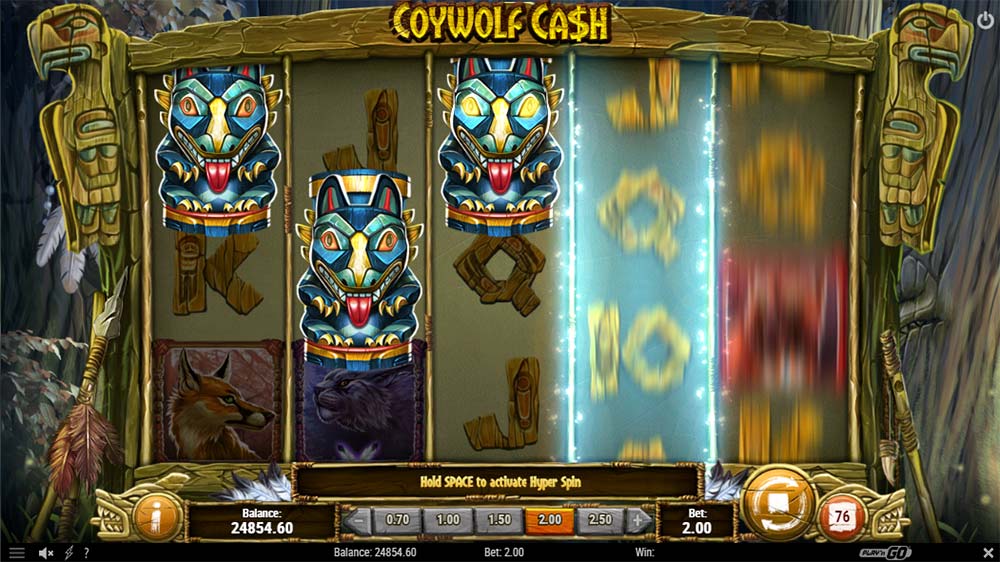 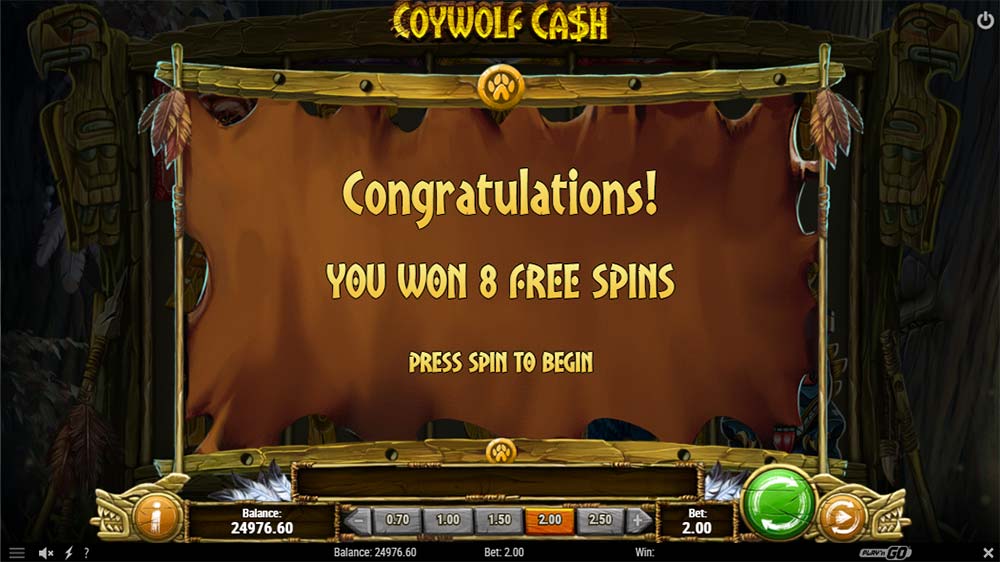 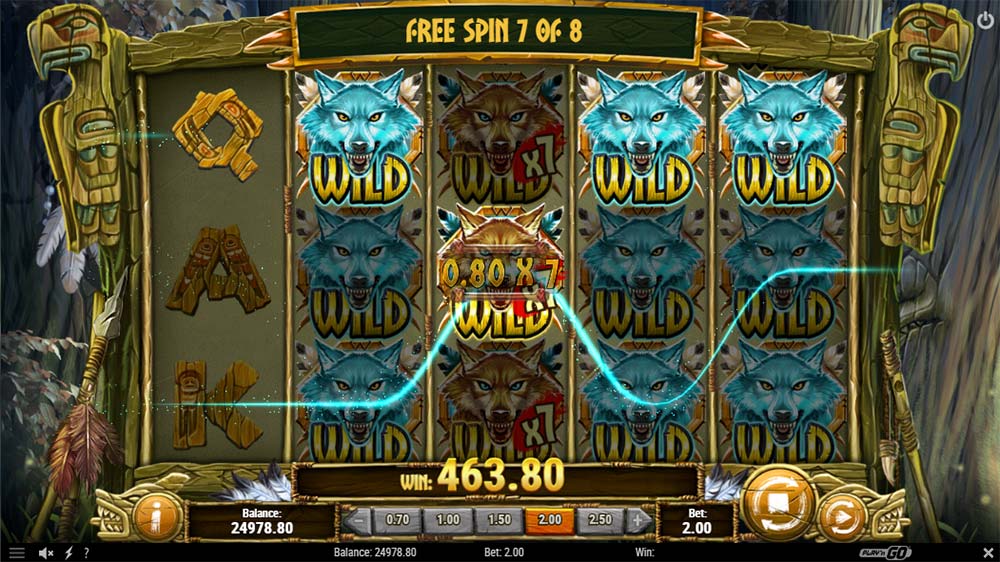 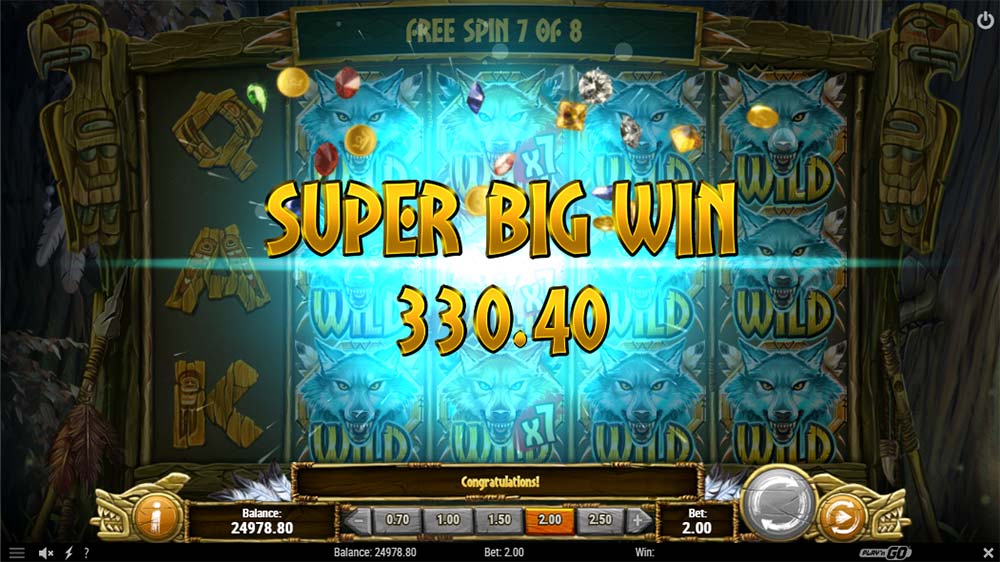 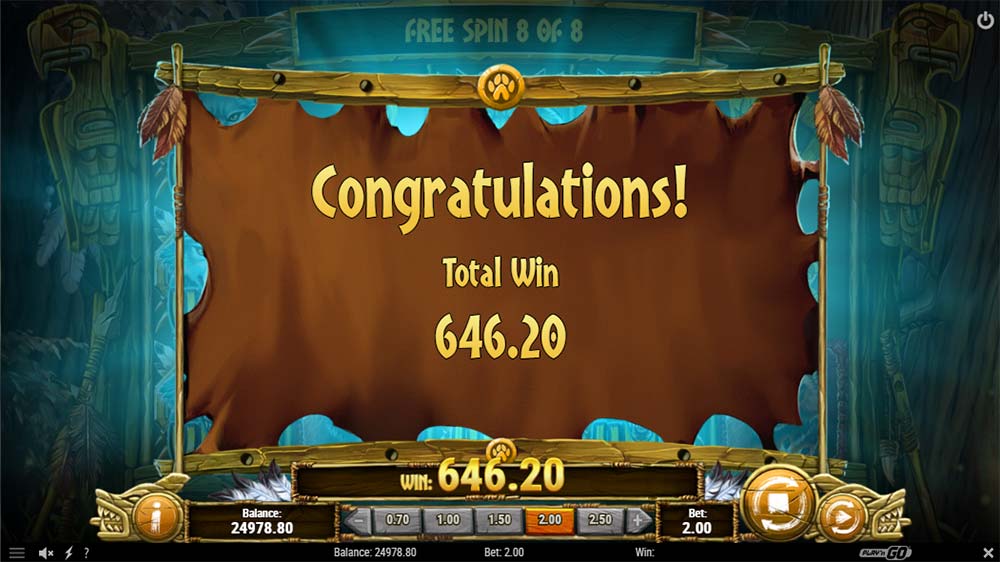 The special Mask Scatter symbol appears only on the middle reel and when landing in view can grants up to 3 wilds reels in the base game and 4 wild reels during the free spins.

The free spins or “Prey Spins” are triggered by landing three or more Scatters, awarding 8, 11 or 15 spins for 3, 4 or 5 of the Totem Scatters.

During the Prey Spins the unique Wild Mask symbol is added to the Wild Reel which allows the second tier of wild reels to triggered during the bonus round which can award wild multiplier reels or extra spins.

The tier 2 spins can fill the reels with Multiplier Coywolf Wilds featuring multipliers of x2, x4 or x7 and Totem Scatters with +2 or +4 spin rewards.

The Coywolf Cash slot from Play’n GO is a slot release that we have mixed opinions about, the paytable is very low paying for all but the wild symbols but this is countered by the abundance of wild reels and multiplier wilds reels during the bonus round, that said if these don’t make an appearance in the bonus round you are definitely going to struggle to get anywhere close to 100x stake wins.

Visually the slot is very nice and the Totem mask feature is a new and interesting mechanic which provides an extra tier of excitement to the gameplay especially when the 7x multipliers come into play!

In our playtests, we had mixed results with the best bonus round being well over 300x stake thanks to lots of wild reels and a multiplier 7x reel, but the other bonus rounds struggled to get close to being over 100x.