We Check out the New and Exclusive Golden Genie Slot From No Limit City!

Mr Green Casino already has the next scheduled slot release from No Limit City playable at their casino as an exclusive release ahead of its general release later this month, so if you are looking to check out the Golden Genie and the Walking Wilds Slot then Mr Green is your casino of choice!

The Golden Genie slot has all of the usual hallmarks of a No Limit City slot we have come to expect, innovative features, crazy multipliers and a good serving of “potential”, this slot is being released with a high volatility rating and given the way the multipliers add up its easy to see why.

The base game uses a regular 5×3 reel set and comes with 20 fixed paylines with a couple of base game features including Genie Wishes (Added Wild Multipliers) and Genie Lamps (Added Wild Reels) which also pays in both directions when active.

The main bonus feature is triggered by landing 3 or more scatters anywhere on the reels, but with a walking wild multiplier feature in the bonus round, the further across the reels they land the better.

In specific markets, this slot does come with a bonus buy feature which costs a premium of 80x the current stake to instantly trigger the free spins round.

During the bonus feature, you have a walking wild mechanic with multipliers involved, on each free spin the wilds move one position to the left and the multipliers are increased by one, when they disappear from the leftmost reel however this multiplier value is then added to the next available wild symbol. Given that additional wilds can also land during the free spins this can lead to some very high multiplier values if several well placed wilds land in view.

The flipside of this is that is if no additional wilds land during the bonus round the entire bonus feature could be over in just a few spins, you are granted one final chance to land a new wild when the last wild has walked from the leftmost reel! 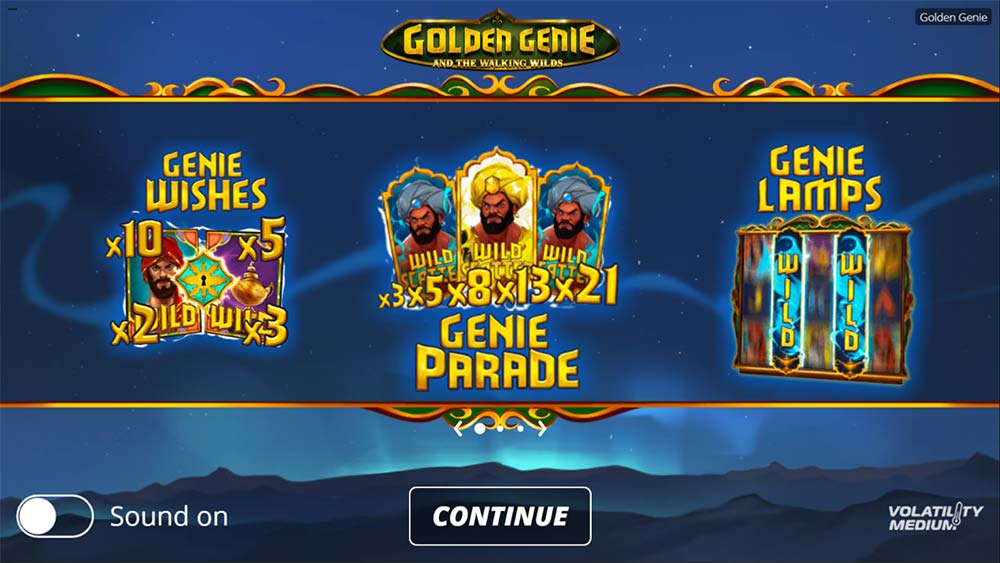 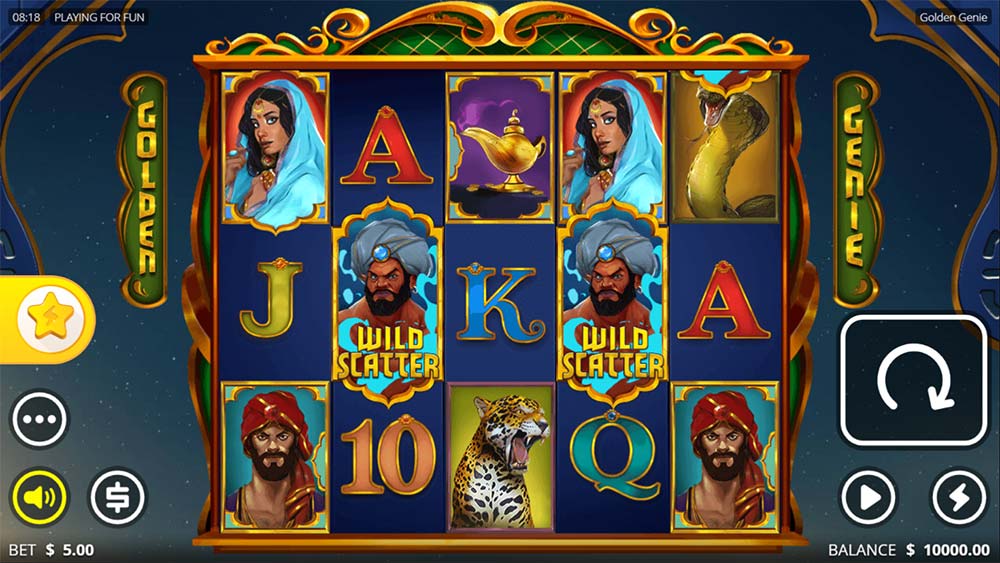 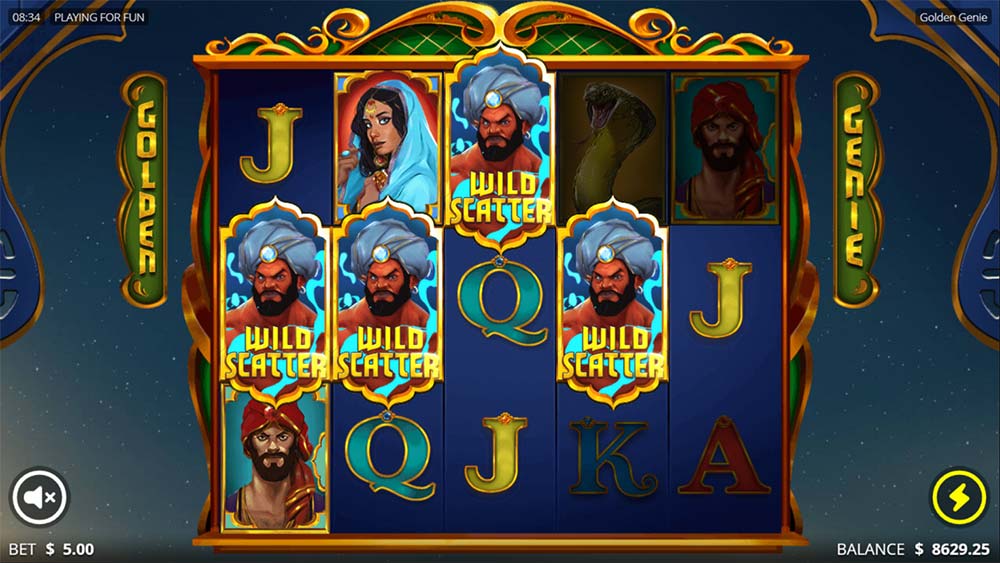 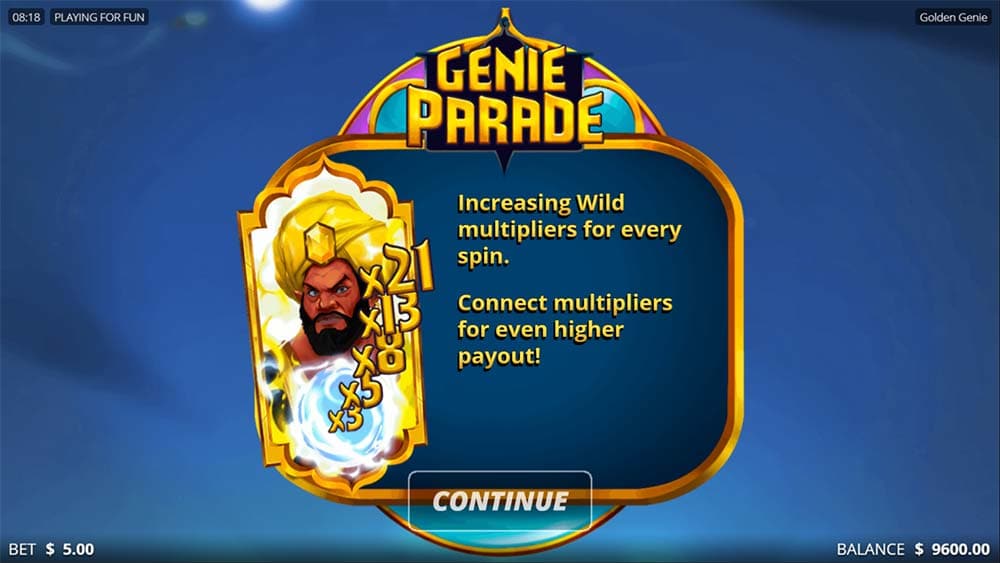 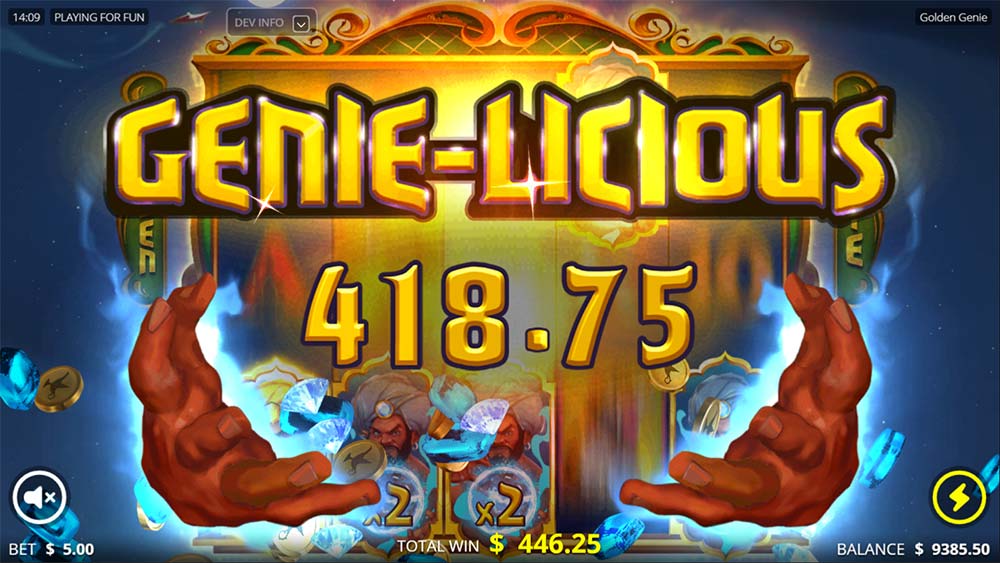 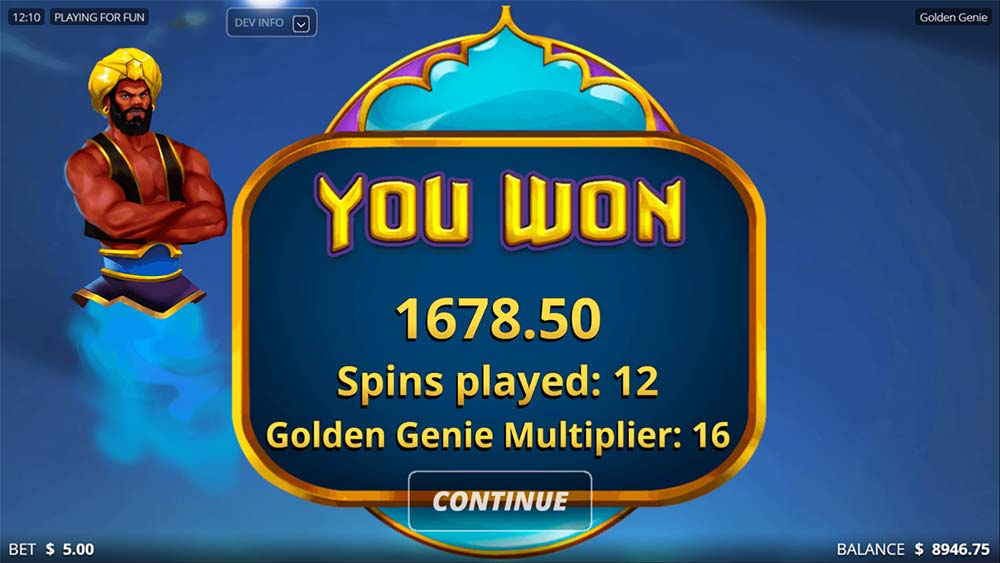 The Genie Wishes feature activates when the Aladdin symbol lands adjacent to the genie symbol (left side), these symbols are then converted in wilds and a multiplier can also be awarded in the range of 2x up to 10x.

The Genie Lamps feature can activate randomly in the base game and awards 2 wild reels on reels 2 and 4, winning combination are paid in both directions when this feature is activated.

The free spins round is triggered by landing 3 or more of the special Genie Scatter symbols anywhere on the reels, when the bonus round begins the leftmost Genie is transformed into a Golden Genie symbol with multipliers increasing by 1x as this walking wild moves across the reels.

Each of the other wild symbols is also upgraded with a 1x multiplier between every free spin, when the golden genie leaves the reels this value is then added onto the next visible genie and the process continues.

The free spins round continues until no more wilds are on the reels, with one final spin awarded in order to land a new wild symbol.

The Golden Genie and the Walking Wilds slot from No Limit City is another polished release, the same huge potential that we have grown accustomed to from them is back with a few novel changes in mechanics, but the insane multipliers feature very heavily in this slot release.

Whilst this slot does play out in a similar fashion to the Harlequin Carnival slot, the way in which the multipliers grow and re-spins are awarded is different enough to make this title stand out. We did manage some huge wins during our bonus buy playtests (over 300x stake) but it’s also worth noting that were extremely highly volatile slots are concerned you can also expect some very disappointing bonuses too which may last only a few spins before the genies have walked from the reels.

Overall though its another great slot release, definitely worth checking out if you are already of fan of No Limit City’s previous releases like Deadwood, Punk Rocker and the Barbarian Fury.