Rizk Casino will be adding the latest No Limit City slot to their casino at the start of July titled Milky Ways, a cleverly titled slot release that covers the space theme design as well as the “winning ways” payline mechanic.

At the core of Milky Ways, you have a regular 243-ways slot machine with the addition of some special Solar Wilds that can include multipliers from 1x to 3x and these also multiply with each other increasing the win potential greatly.

In markets where Bonus Buys are still allowed you can also skip straight into the bonus feature at a premium cost of 38x the current stake, but it should be mentioned also that triggering the bonus game in regular gameplay is also quite frequent with a stated 1 in 66 chance per spin!

There are also 2 different RTP versions from this slot 96.14% / DX1: 94.24% so it’s worth double-checking the payable to see which version the casino is running for your country!

Whilst Milky Way is being released as Medium Variance slot from No Limit City the addition of multiplier wilds means there is still some great potential for huge wins especially when the premium symbol is involved, whilst nowhere near as volatile as Deadwood or Barbarian Fury, but compared to many other providers it’s closer to a Medium/High Variance release.

The main bonus feature is triggered by landing 3 scatters and increases the reels on the slot as well as increasing the number of winning ways up to 3125, with added wilds to make winning combinations much easier and a res-pin mechanic included for every new winning combination formed during the 3 free spins.

The multiplier wilds can still be awarded during the bonus round but its the re-spin mechanic that keeps re-spinning until no new wins are formed that is the key to landing the big wins on this machine. 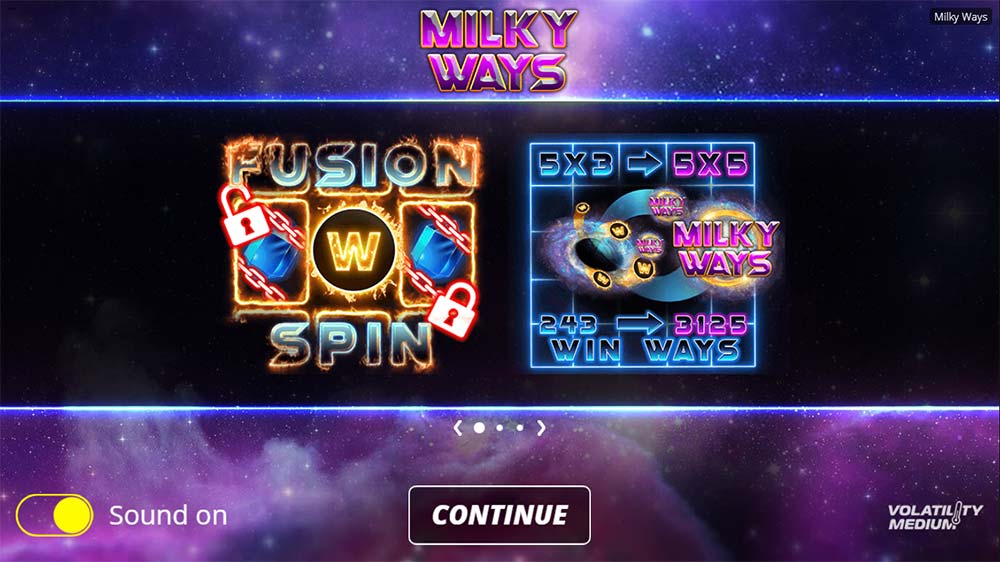 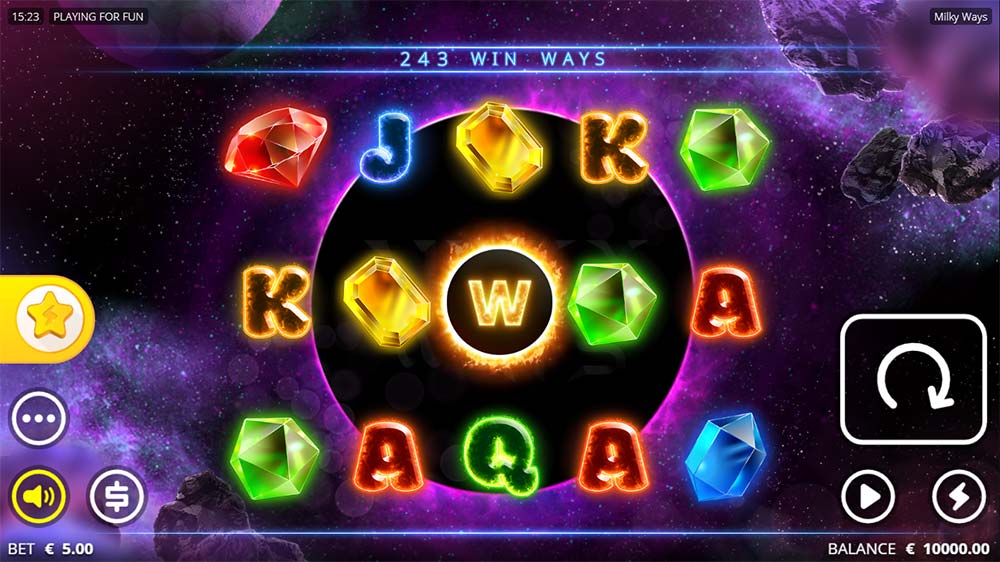 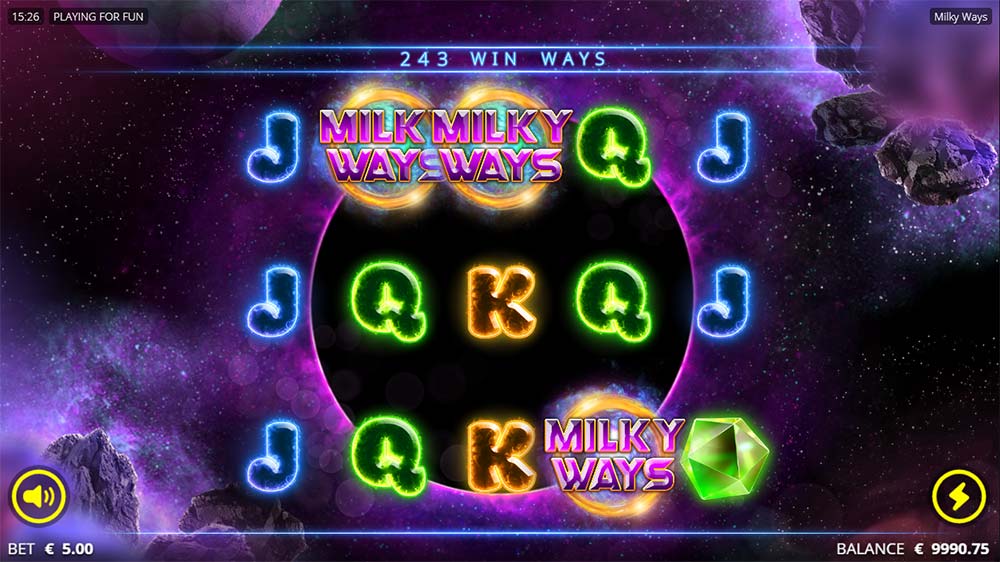 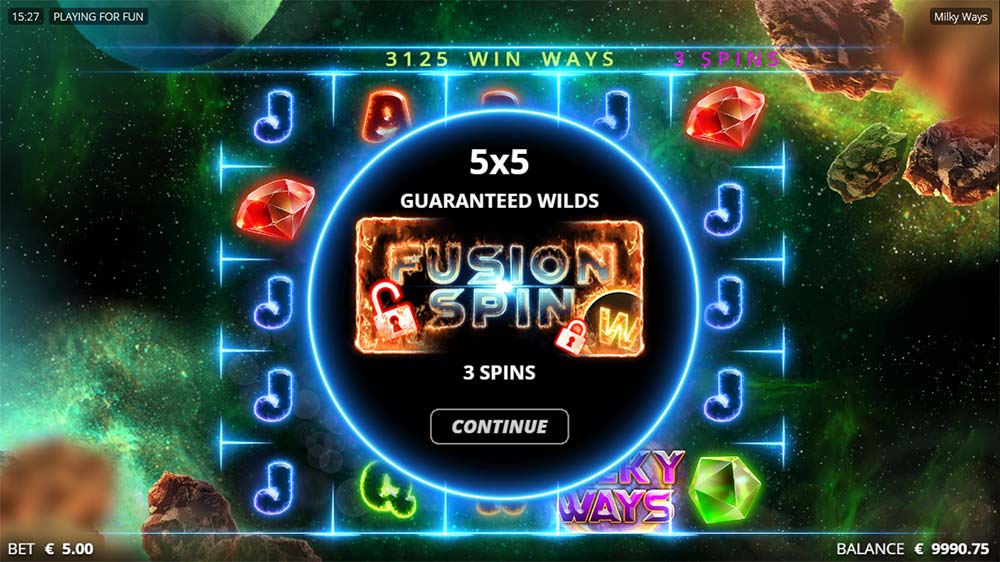 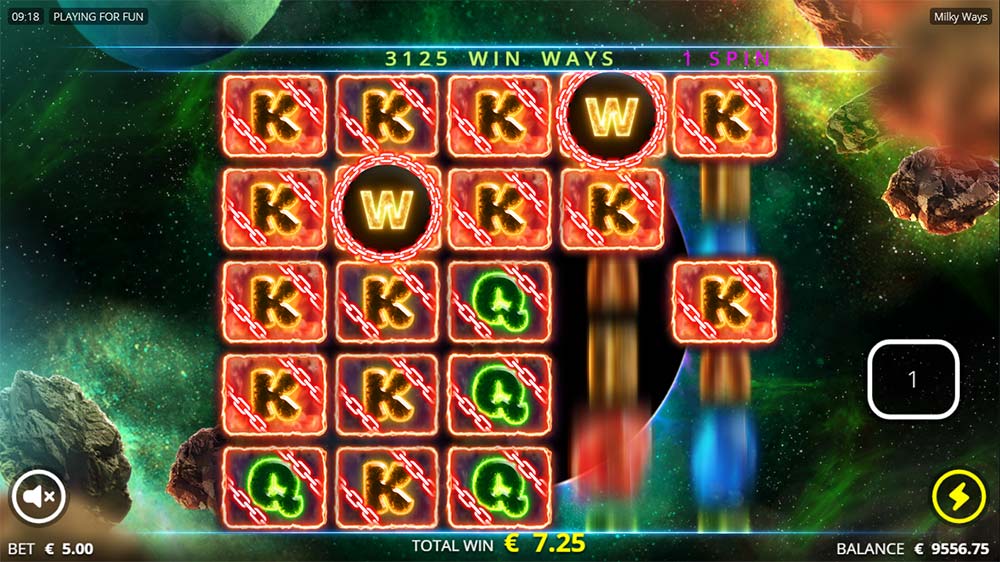 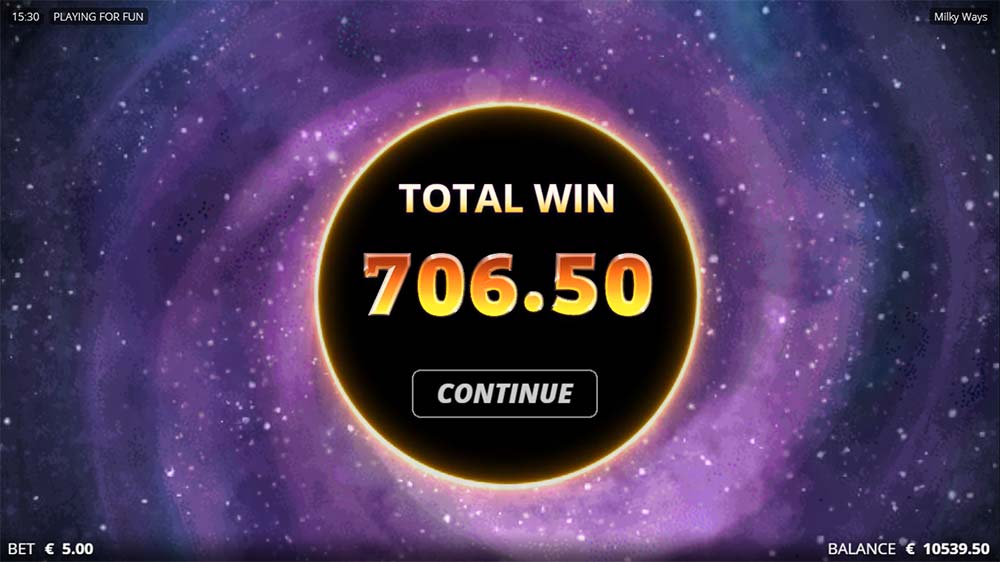 The Solar Wilds symbols reveal a multiplier when it lands in the range of 1x up to 3x, the Solar Wilds also multiply with each other.

The free spins are triggered by landing  3 Milky Ways scatters anywhere on the reels. The reel area is increased up to 5×5 from a 5×3 reel base game, increasing the winning ways from 243 up to 3125 ways.

3 Free Spins are awarded and a guarantee of 2 Wilds landing on the middle three reels, any wins formed during the free spins will trigger the Fusion Spins.

Whenever you get a win in the bonus mode the Fusion Spins (Re-Spins) is triggered. All of the winning symbols are locked in place and a respin is rewarded until no more winning symbols lands.

The Milky Ways Slot from Nolimit City is a reasonable Medium variance slot release, the combination of increasing ways and re-spins makes for an enjoyable bonus feature with a dose of big win potential thanks to the multiplier wilds.

The slot does, however, suffer slightly from just the 3 free spins awarded for each bonus round, extra spins are scarce and definitely no to be expected regularly, the Multiplier wilds are rare also in the bonus feature, so you are mainly reliant on a large amount of premium paying symbols landing in view for the big wins on this machine.

The bonus feature hit frequency is quite regular though so the action is fairly fast-paced, the reduced bonus buy cost to trigger the bonus feature supports this also. In our playtests, we did manage several bonus features well over 100x stake but if you are looking for huge wins you may be better looking at No Limit City’s awesome range of more volatile slot releases like Tombstone, Punk Rocker and Deadwood!