We Check Out Pixies vs Pirates Slot a New Release From NoLimit City!

Casumo Casino has recently added a new title from NoLimit City which is a fairly new slot developer to our knowledge to their casino titled Pixies vs Pirates.

This colourful cartoon themed slot features an epic battle between Pixie Queens and Pirate Captains all housed in a slightly larger than usual 6 x 3 reel array which uses a pay any-way format giving you a starting  729 way to win.

The Pixies vs Pirates slot comes with a number of new and interesting features known as X-Nudge and X-Ways where special symbols can land in view expanding then creating lots of matching symbols and as a result increasing the number of ways to win too, on top of this there are special wilds on the reels that when landing in view will nudge into position covering the entire reel, the more they have to nudge the higher the multiplier value they gain.

These 2 features interact nicely together too with both being able to land on reels increasing the symbols and then giving the wilds even more positions to nudge into and a result giving even bigger multipliers!

The main bonus round is where the battle really begins, this is triggered by the usual 3 or more scatter and then you are tasked with picking a winning side, Pixies or Pirates? Pick correctly and when the bonus is over you will be rewarded with more extra spins along with another decision to pick a winning side.

During the bonus round the reels are enlarged giving even more ways to win on every spin along with a really nice battle mechanic that can grants lots of extra re-spins after the bonus round completes.

If you are a fan of the BTG Megaways slots then Pixies vs Pirates will definitely appeal, there are subtle differences for sure but the single huge hit possibilities are definitely here, and who doesn’t like multiple wild reels with multipliers added? 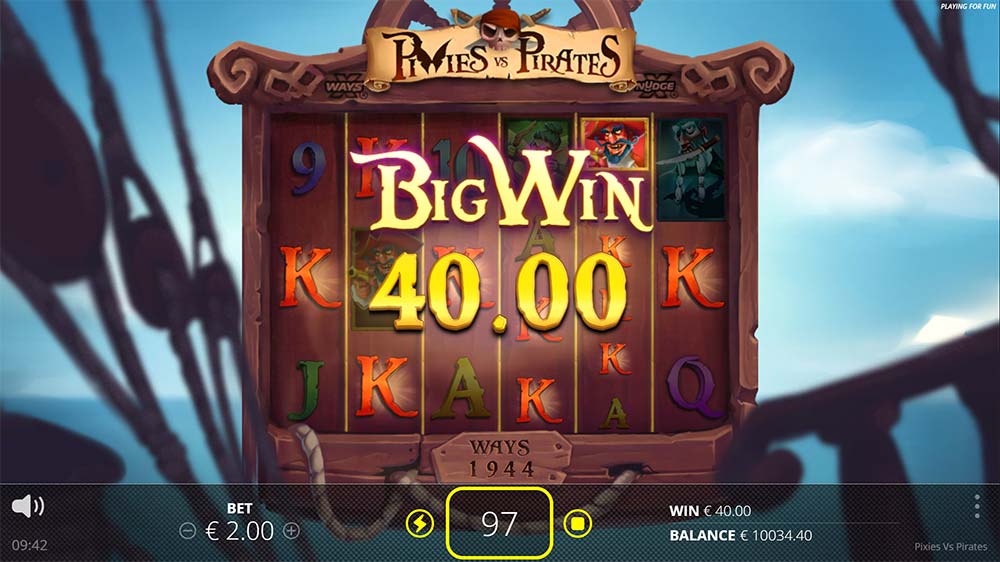 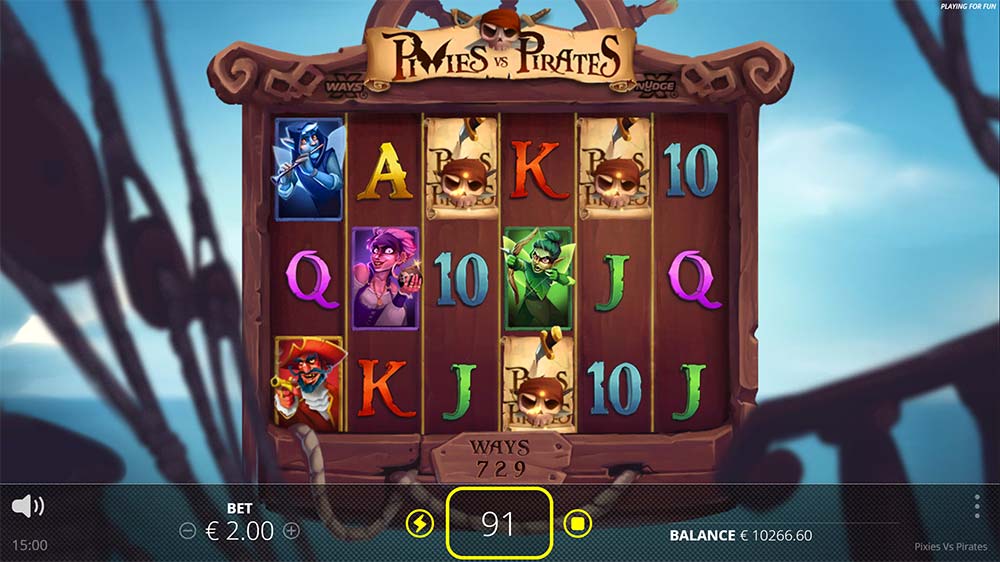 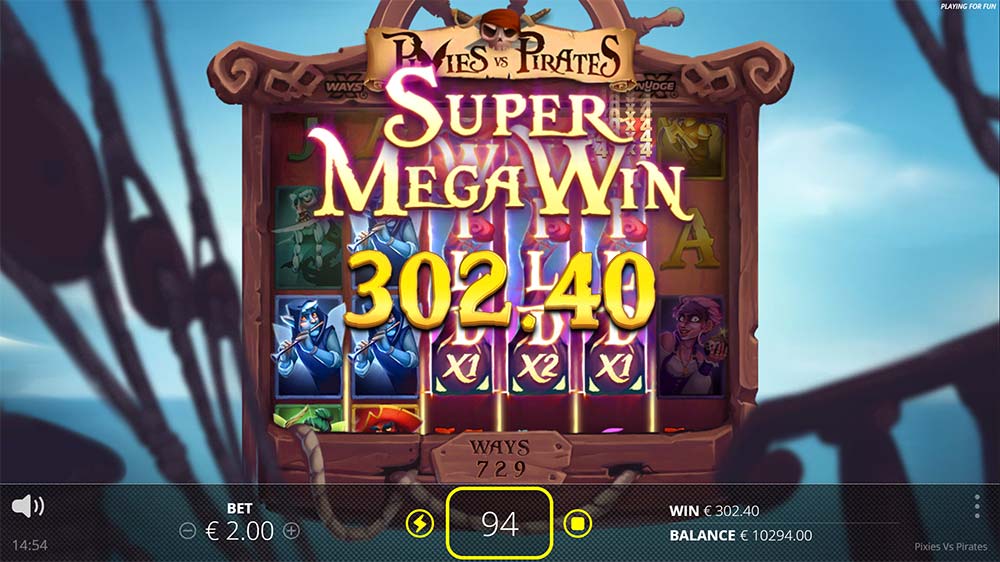 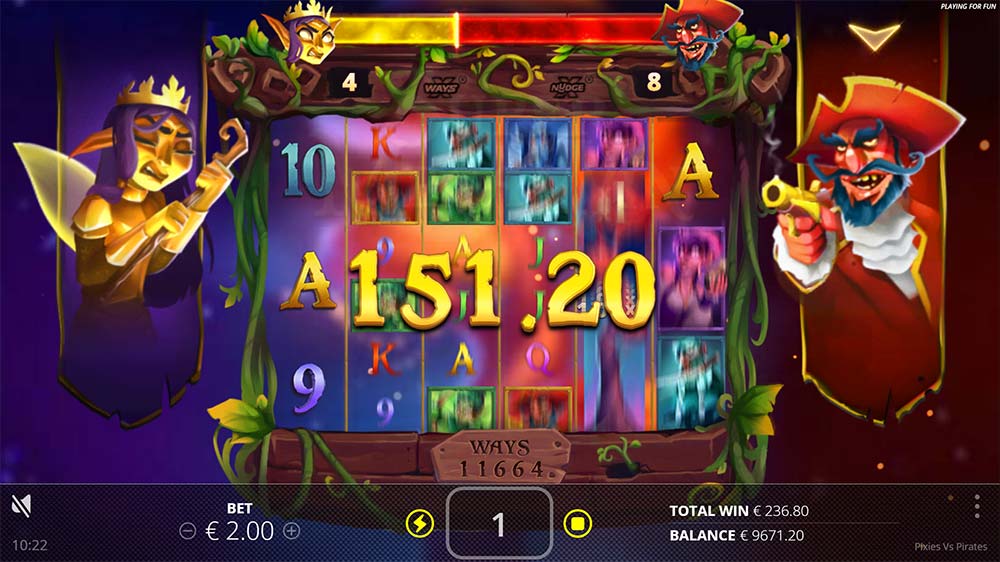 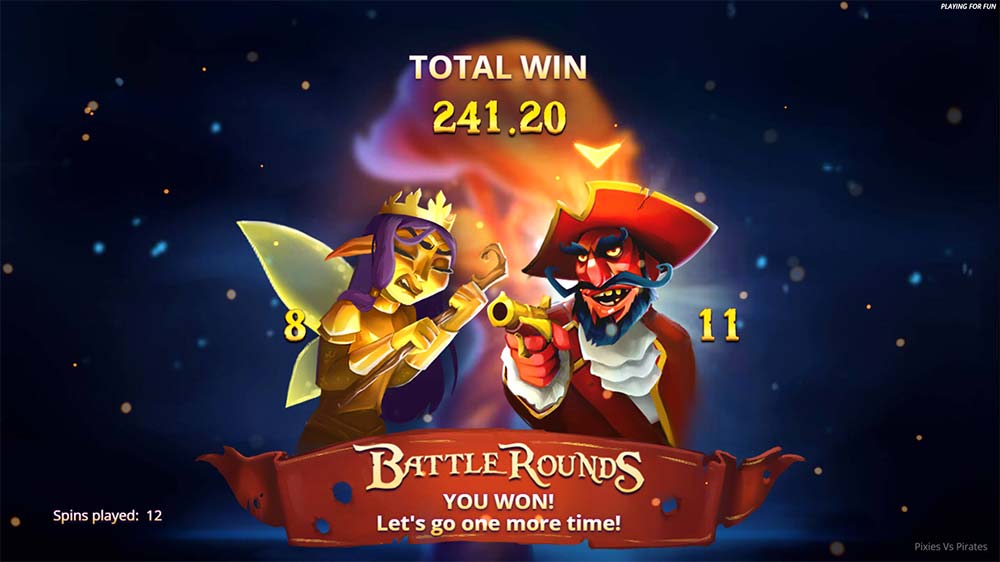 There are special Treasure Chest symbols on the reels that when landing in view will reveal a randomly chosen symbol, these can add up to 4 addtional symbols to each reel they land on.

These chests cannot include the Bonus Scatters or the Nudge Wild symbols, but can increase the winning ways up to a huge 11664 ways when landing on multiple reels during one spin!

The special wild symols will nudge to cover the entire reel when landing in view, for every position they have to nudge a multiplier value is added. For example, when the symbol lands at the top of the reel it will nudge down completely to the bottom creating a 4x Multiplier Wild Reel.

If the X -Ways symbol has increased the number of rows on a reel this multiplier value can increase further!

An initial option allows tto you pick either the Pixies or Pirates during this battle, if you guess correctly which side is collected most during the free spins then you will earn yourself a re-trigger and addtional free spins.

The reels are fully extended during the free spins giving a huge 11664 ways to win.

We thoroughly enjoyed playtesting the Pixies vs Pirates slot from NoLimit City, with superb graphics and the combination of the X-Ways and X-Nudges features and the way they can interact made for some exciting base gameplay, especially when multiple wilds land in view nudge into position and multipliers get added!

The novel feature of picking a winning side for the battle free spins is also a very nice touch and can provide you with plenty of re-triggers if you keep guessing correctly which team is going to win, in our playtests we had base game wins well over 100x stake and bonus rounds well over this mark too, with lots more potential for anyone lucky enough to land multiple wild multipliers reels!

Overall if you are a fan of the Megaways slots then certainly add this to your playlist as you should enjoy the special features and bonus mechanics that have been added to this slot.